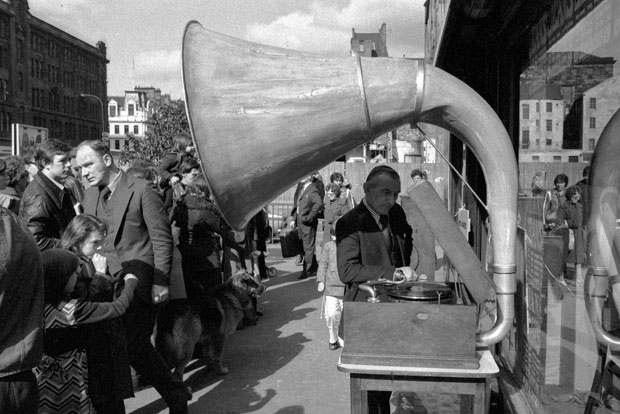 For four decades now, the photography of Hugh Hood has hidden in plain sight. Quite literally. It lies in a ring-bound folder in a corner of the Mitchell Library’s Glasgow Room, sharing shelf space with the dusty gazateers and the typewritten reminiscences of old Shettleston.

A note has been Sellotaped to its cover, inviting browsers to learn more by consulting a member of staff. I did this but it seemed there was nothing to learn. No-one knew from whence the folder had come. Index cards and tetchy cardiganed librarians were quizzed, but to no avail. The folder, it seemed, was rogue, feral, abandoned, orphaned. Which only served to echo its contents, for they depicted the Glasgow of the 1970s. And who was Hugh Hood? It was easy, in his comprehensive absence, to imagine the sort of man he’d been. Surely one of those doughty Glaswegian old boys, laid off from the shipyards perhaps; a self-improving bunneted amateur, killing his time with a Box Brownie bought at the Barras? Turned out he wasn’t. Thanks to Malcolm Dickson at Street Level, Hugh was tracked down. In fact, he was and is a thriving photographer and documentary film maker, engaged mainly on commercial work, based out of London. In the early 1970s
he had studied photography at the Glasgow College of Printing. Between lectures, for practice, he ventured out into the city. Or what there was of it.

What Hugh found was a Glasgow that had given up the ghost; a weary, frazzled interzone, half of which was being flattened as the other half was in the throes of construction. This Glasgow was a city of ghosts and rubble, its air a miasma of sandstone dust and occluded sunlight. Hugh’s work was local history reframed as National Geographic anthropology. Who were these people, you wondered; had they really been so bedraggled, so tired, so beaten?

It seems they were. The folder contained close to fifty monochrome prints, sheathed in their polythene wallets. I flicked through, astonished that pictures so potent and so fascinating were so obscure. Every totem and trope that made up Glasgow’s visual sense of self was present and correct: the tenements, the cheeky wee boys, the Gorbals back courts, the cranes on the river, further cheeky wee boys. Yet the work had to it no civic dimension, it contained nothing that was cherishably Glaswegian, nothing quaint or beguiling: no long-hairs queuing outside the Apollo or infants frolicking in Kelvingrove Park. There were no People’s Palace postcards here, no PR – just frank and unblinking assessments of a vanquished city, nursing its shattered jawlines, awaiting the deliverance of some far-distant modern day.

One shot in particular was instructive. A girl, six years old maybe, pushes a broom at the mouth of a tenement close. The viewer is reminded of a Douglas Corrance or of a Joan Eardley painting, of an entire school of Glasgow images in which tousled, grinning kids serve as counterpoints to the pervasive dereliction and decay. In this kind of image Glasgow children are undaunted by the horrors around them for they are symbolic of a better future. But not here. You looked closely at this picture and noticed that behind the girl was a bricked-up window upon which was scrawled the most offensive of Anglo-Saxon epithets: in chalk, in a round childish hand. In Hugh Hood’s Glasgow, nothing stayed clean for long. The damp was both physical and moral, and on the rise constantly.

Or consider the Glasgow back court. Conventionally, these were depicted as grubby wonderlands, anklebiter assault courses, shabby playgrounds, with kids swinging from washing lines and leaping from midden to midden like Tarzans in short trousers. Again, not here. The back court Hugh stumbled across was like a vision of hell, a bomb-site wasteland of shattered slate and scattered timber, of gutted prams and torn-up sofas; the square root of squalor. None of the enclosing tenements have their windows intact, suggesting they were on the verge of being pulled down. Two little girls sift through the carnage, appraising their finds.
In another shot, two boys appear with possibly dark intent through the haze of a bonfire. The sight is sinister, indistinct, pregnant with malevolence; the ultrasound of a Glasgow yet to be born.
A close analogue to Hood was Oscar Marzaroli. Each man worked the same patch in the same period. As photographers they were similar, yet strikingly distinct. Marzaroli’s pictures, for all their greatness, set out always to oblige. They were commercial and persuasive. We can almost hear their creator charming his scruffy subjects with his portrait-studio patter or picture him awaiting the arrival of a particularly photogenic raincloud.

Hugh’s vision of Glasgow was danker and blanker, he was a photographic stalker, keeping quiet, staying out of things. Marzaroli went for the cheerful and the quirky; Hugh for the sad, the dislocated, the brokendown. Which was handy, for the Glasgow of 1974 seemed to harbour little else. To paraphrase Keith Waterhouse, it was a city that looked as though it were helping police with their enquiries. Relevant here particularly is Hugh’s picture of Gerry’s Snack Bar, a terrifying semi-condemned caravan parked on a scab of waste ground, offering resistible permutations of pies, beans and burgers, its macabre parody of the service industry only intensified by a jaunty cartoon of a French chef. Pensioners stroll past the ailing Art Deco underground station at Bridge Street in the rising, looming shadow of a scaffold-clad tower block. An old boy sets up an antique gramophone outside the Krazy House clothing emporium at Glasgow Cross, in a doomed pastiche of showmanship. At Bridgeton Cross an old Corporation bus seems to be fleeing the scene. A fly-blown clown with an acoustic guitar leads children through the Barras, like the worst Pied Piper
on earth.

Altogether this is a lost world, shown without sentiment or nostalgia, rendered neutrally and
naturalistically. There is nothing cute or huggable or wry or self-mythologising. It all seems unutterably strange, primitive, as eccentric as a top-hatted Victorian on a tram. And yet, occasionally, it remains the Glasgow we know today. One shot shows late-night revellers at a fast-food van near the then-new concrete furrow of the M8. A similar van stands on the very same spot today and remains a magnet for the small-hour refugees of Sauchiehall Street. Like the mice in Bagpuss Hugh’s cast of Glaswegian dageurrotypes still come to life, every weekend, when the pubs close. Whether by chance or design, by luck or skill, by accident of history or by history of accident the photographs of Hugh Hood captured an eternal, brutal truth about
the city, that, no matter how tempered it becomes, its skull is forever threatening to break through its skin. Which is why these spooky, candid and remarkable documents deserve an audience far in excess of those who haunt the overlooked nooks of the Mitchell Library.

(Above text ©Allan Brown 2013, all rights reserved, used with permission).

Document Scotland also wrote to Hugh, who kindly replied letting us know a little background to his images and working methods, and graciously gave us permission to showcase his work. Here is what Hugh shared with us….

“The project was started in 1974 when I was twenty. I came across a magazine called Creative Camera which was a showcase for what was called documentary photography then, but is now known as street photography. The photographs were very different from the usual stuff seen in photography magazines of the time in the sense they were not about technical theory. Two photographers really got me to look at taking photos in a different way; Robert Frank and Tony Ray-Jones, whose photographs I came across in Creative Camera. They had long-term projects to document such as Frank’s vision of America on the road, and Tony Ray-Jones’ which covered the old English customs that were dying out and the English seaside.

I then started ‘Look at Glasgow’ as my project in 1974 and tried to photograph the people and the cityscape. It was a bit random in a sense, as I would wander around different areas of the city with my camera and hope to find good photographs – which was really a hit or miss situation. But on other occasions I would have to contact for example, the ship yards and the underground to get permission to photograph in their workshops and yards. Although I say Glasgow 1974, the images cover a period up to 1978 on and off. The main areas of Glasgow I would look to photograph were Woodside, Anderston, Gorbals and Govan.

I never once had any problems standing on a street corner or going into backcourts and take photographs of adults or children. I never asked their permission but would interact with them afterwards if they were interested in what I was doing. This was a time when very few people had cameras and were more innocent about photography than today. I don’t think I would dare photograph children today playing in the streets for fear of being arrested.

I did try to get institutions like publishers to make a book and contacted galleries to have an exhibition, but had no takers. Glasgow did not have any galleries that I was aware of which exhibited photography at this time. (There was one in Edinburgh, but I’ve forgotten its name). It was a bit odd as the Glasgow photographer Annan, who photographed what would be termed “street photography” in the 1880s, was being exhibited back then. After 1978 I kind of stopped the street photography. I subsequently found out that other photographers were doing similar work in 1970s in Glasgow, and it’s a shame we never meet up then to combine our interest.

Most of my photography was done at weekends and holidays as I had a full-time job as a photographer and a colour printer for various companies in Glasgow.

Camera-wise, I started with a Nikon F with 28mm lens and then bought an old Leica M2 with 35mm lens and 50mm lens, which was used for most of the street photography.

I had “lost” all my 35mm negatives after I moved to London in 1980 to start a film course at the Polytechnic of Central London. But in 2006 they were found again at my brother’s house in Glasgow and I then bought a scanner to start up loading to my website. The images now have a historical interest with people contacting me because they show someone they knew or a place they lived.” – Hugh Hood.

Hugh Hood’s photography website is here, and there is a slideshow of 1974 Glasgow images set to music, which is tremendous to see, but also quite sad, to see the vanishing Glasgow neighbourhoods. All images and text by Hugh Hood are copyright of Hugh Hood 2013, all rights reserved. You can message photographer Hugh Hood on Twitter here.

Journalist and writer Allan Brown is on Twitter. Send him a note, tell him how great his writing is.