Renowned London-based editorial and reportage photographer David Levenson has had a small zine published via Cafe Royal Books, showcasing his photographs of the Burry Man tradition in South Queensferry, Scotland. We thought it a great little set of images, and nice to see archive work finding new uses. We asked David via email if he’d be so kind as to let us showcase the work and talk us through it, and to our great pleasure, he agreed… 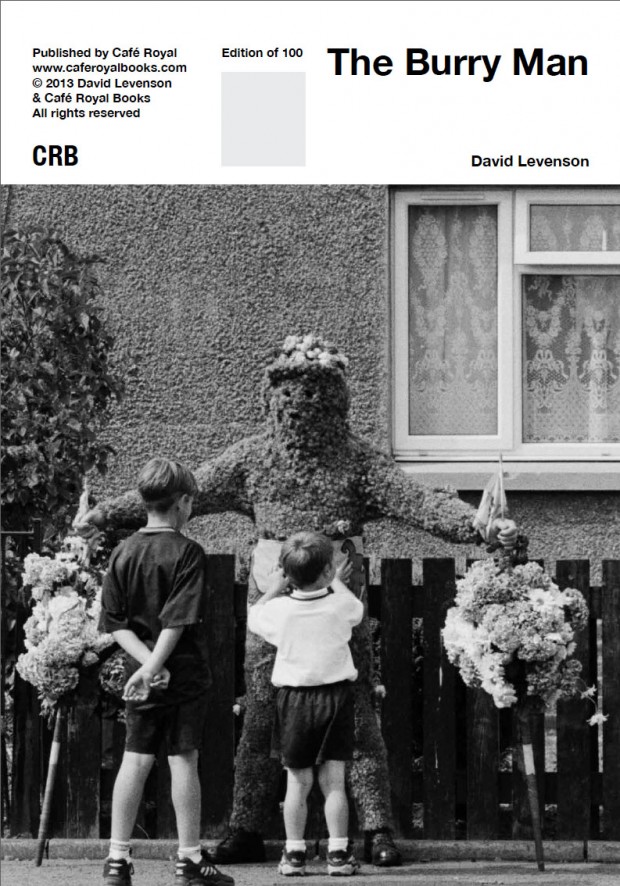 Document Scotland- David, Thank you for letting us showcase your work on the Burry Man of South Queensferry. Can you tell us a little about the background to the custom, and how you first heard about it or became interested to photograph it ?

David Levenson- The Burry Man is the main figure in an annual ritual that takes place in South Queensferry, near Edinburgh every August. A local man is covered from head to foot in thistle burrs. He is paraded through the town at a snails pace supported by two assistants. He is in the costume for nearly nine hours, often in sweltering heat, and can easily lose nearly a stone in weight. Able only to drink through a straw, he is sustained by a few wee drams, and lots of water. I shot it back in 1997 when the Burry Man was Alan Reid, who did it for 25 years, until 1999.

I had seen Homer Sykes classic book “Once A Year” shot in the 1970’s, and was fascinated by the quirky rituals that he had photographed. I was encouraged to shoot my own version of it by Christopher Angeloglou, my picture editor at Colorific!, my agency at the time. Covering some of these events is almost a rite of passage for documentary photographers in the UK. Before Homer, Patrick Ward and Tony Ray Jones had captured elements of it, and before that many other press photographers over the years. I could see from photos of the event that it was one I had to cover. It was however the only one in the story that I shot in Scotland. 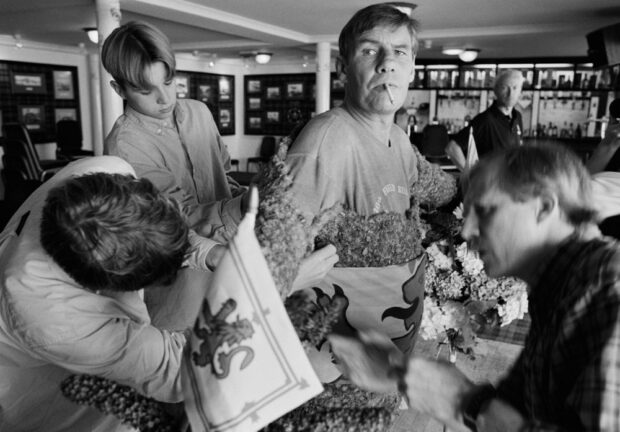 DS- How does photographing in Scotland, and at an event like this, fit within your overall photographic practice and interests?

DL- My favourite type of work has always been social documentary, and the recording of events for future posterity. So this project fell naturally into that classification. I have always found Scottish people to be a particularly friendly bunch, and have always enjoyed working up here. It was a very pleasurable day spent following the Burry Man and his team around.

I have always been aware of the historical value of documentary photography, but with hindsight, I wish that I had shot a bit looser in the 1970’s and 80’s. Elements that at the time I had cropped out when shooting, are the things that now give the pictures a historical context. It is very difficult, if not impossible to imagine what around us will change or disappear in years to come. Few photographers have that vision to capture the banality of daily life. Martin Parr is one of the few. Even now just 16 years later, the fashions of those around the Burry Man in the photos, look dated.

When I first left school I worked in a Fleet Street photo agency Fox Photos, and one of my jobs was filing prints in the archive. There were the most fantastic press and feature pictures shot from the 1920’s through to the 1970’s and I learnt so much by studying them. Their value was not just as good photography, but as a historical record of their time and the people who lived then.

You walk through a graveyard, and it’s just unknown names on headstones, but they were all people with fascinating stories to tell once. By documenting their existence in pictures we let them live on. Who goes to visit the grave of their great grandparents? They only exist to us when we have photos to remember them by. Documentary photography is a terribly important thing, but these days so many stupid barriers are put up to try and prevent us taking pictures.

DS- I see from your website that you’ve shot at a few such quirky British customs or festivals, why do you choose to photograph at such events, such customs? Do you feel these customs are dying out, or not? Does the photographing of them help keep them alive do you believe?

DL- I shot events like the Burry Man all around the UK, to build up a quirky story on ancient customs and rituals. At the end I edited the set down to a meaningful one, and went to the Sunday Times magazine with it. They were my first choice to use it and fortunately for me they liked it, and ran it over 10 pages.

I think that most of these events could still be around in a hundred years time – though having said that, I have heard that one, the Britannia Coconut Dancers in Lancashire, is struggling to find new members to take part. That is a tragedy because it is these regional rituals, that help define an area. All of them rely on active participation of the local community to survive. 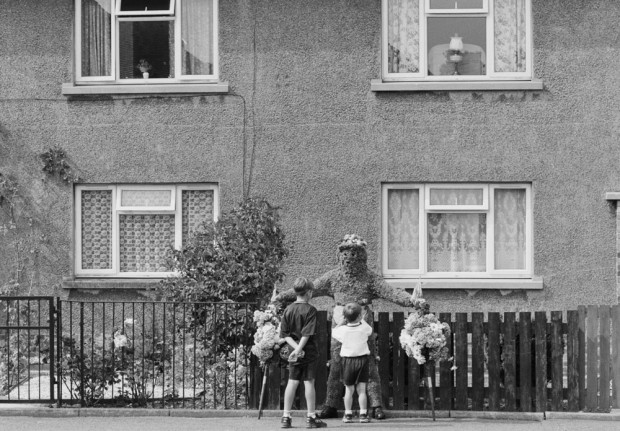 DS- What draws you to documentary work, say such as your project on the Bank of England?

DL- The thing I love about being a photographer is that it gets you into places that you would normally never go, and enables you to meet people that you would never otherwise know. For example the Bank of England story – they had not let a photographer through the door for a hundred years, when I went in. By chance, I had got talking to the head of their PR on a job, and discovered it was the Banks 300th anniversary coming up. I managed after a lot of effort to talk them into letting me come in and do a behind the scenes reportage. If it wasn’t for the birthday angle, it would not have happened. I got access everywhere, even the gold vaults, deep underground. In fact I went into the gold vaults twice because I cocked up the first shoot! Working on colour film in those days, I hadn’t allowed for the strength of the fluorescent tube lighting, and everything had a green cast…fortunately they let me back down to reshoot it.

DS- How do you disseminate your work, such as that of the Burry Man, and do you find an audience for it?

DL- Apart from its initial publication in the Sunday Times magazine, the images from the story have not been used a great deal since. That is why I was so pleased when Craig Atkinson from Cafe Royal Books, asked to publish the story as a small ‘zine. Having an archive of work, it is nice to be able to re-visit it years later, and have it published in ways that were not possible even a few years ago. 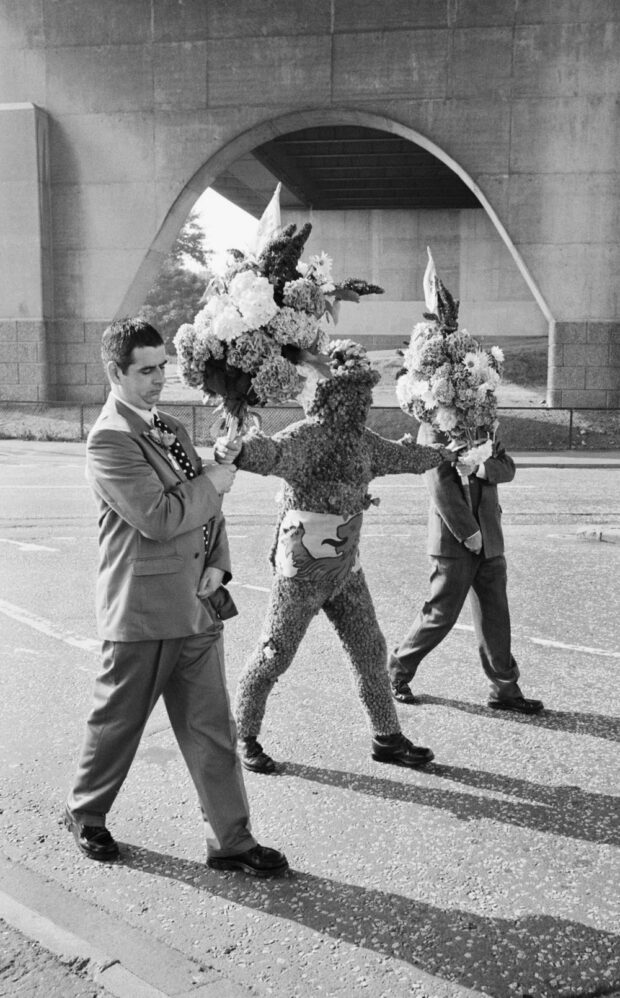 DS- Congratulations on your publication of the Burry Man as a Cafe Royal booklet. What appealed to you about publishing it in an edition of 100, and as such a ‘zine ?

DL- I discovered Craig Atkinson of Cafe Royal Books, after he had published some books by John Claridge, that I had bought from him. Claridge is a top advertising photographer, but grew up in the 60’s in the East End of London. As a young man he had taken the most wonderful black and white documentary images of the area where he lived and the people that he knew. He has been re-discovered  and seen by a new audience via the wonderful spitalfieldslife.com blog.

Cafe Royal Books only do limited print runs of a hundred copies. The ‘zine market is a new one to me, but one that has been enabled by digital printing. It seems a great way to have a small story published relatively cheaply. Like you with your Document Scotland paper, there are so many new avenues available to us now to show our work. It is easy to look back on the golden age of Colour Supplements, but too easy to forget all the fantastic stories that never got published!

DS- Where can people buy your very reasonably priced zine ?

DS- Many thanks David for graciously letting us showcase the pics, and hear your words.

David Levenson (UK) began his career at Fleet Street press agency Fox Photos. He shot the Iranian Embassy siege, the Brixton riots and the early days of Lady Diana. Throughout the 1980s Levenson photographed Charles and Diana on Royal Tours around the world, visiting over 50 countries and producing 16 illustrated books on their travels, two of which made the Sunday Times Best Seller list.
David Levenson is the only photographer ever granted full behind the scenes access into the Bank of England, for a story that ran in the Daily Telegraph magazine.

Click here to see David Levenson’s photography website, or send him a note at David Levenson on Twitter telling him much you enjoy his work. We did.

Born in 1821, Alexander Gardner was a Paisley boy, before setting off in 1851 for London where he met American photographer Matthew Brady. In 1856 he left Britain by ship for American where he reunited with Brady and joined his studio. Subsequently Gardner went on to become one of the first, and most famous war photographers, documenting the aftermaths of the battles of Gettyburg, Petersburg and Fredericksburg.  Gardner also photographed Abraham Lincoln and the execution of the conspirators to the Lincoln’s assassination.