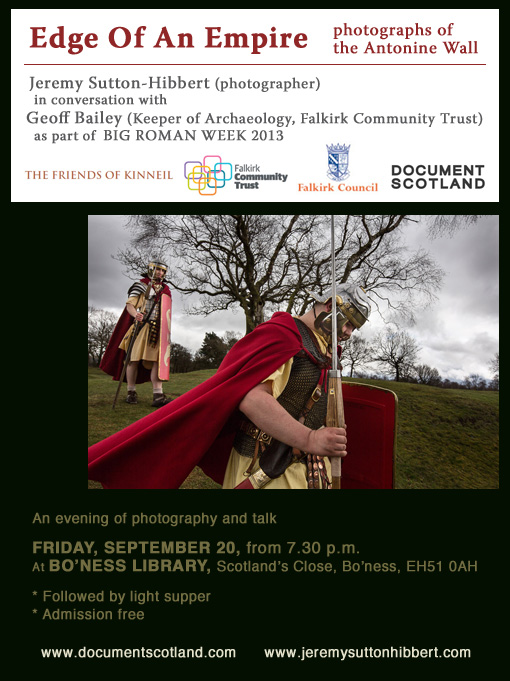 Edge Of An Empire- a talk

Friends, Romans, Countrymen, I’ve very nicely been invited to make a small talk and presentation of some new photography work next week and I’d like to invite you all.

This past summer I’ve spent a bit of time out on the Antonine Wall, walking, exploring, getting some wind in my face, and shooting images which show the present day Wall and its surrounds. I’ve called the project Edge Of An Empire, as the 39km long wall, crossing Scotland’s central belt, was the most north western edge of the Roman Empire.

Next week during Falkirk’s Big Roman Week, held to celebrate the birthday of Emperor Antoninus Pious, who commissioned the Wall, I shall be presenting the photographs and be in conversation with Geoff Bailey, Keeper of Archaeology at Falkirk Community Trust. The event will take place at Bo’ness Library, Scotland’s Close, Bo’ness, EH51 OAH, at 7.30pm on Friday 20th September. The event is free and a light supper will be served!  If you’re in the neighbourhood, please come along.

With thanks to The Friends of Kinneil in offering me the invite to take part in the week of celebrations and events.