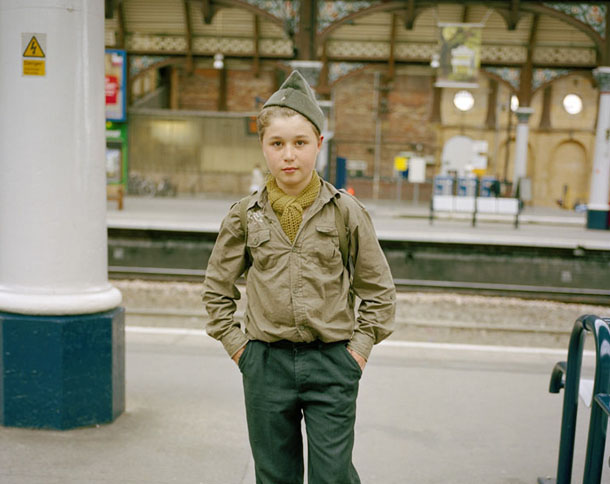 Scottish photographer Niall McDiarmid was recently awarded a prize for portraiture in the International Photography Awards for his current Crossing Paths portraiture project,  an ongoing project which stands as a social document of the looks and styles of people on the streets of the UK at present. Niall kindly agreed to answer a few emailed questions from Document Scotland about the background to his project, and to share with us some of the images from the series which you can see in the Niall McDiarmid Crossing Paths photographic portfolio.

Niall, when did the project begin?

I had been working on a similar smaller project near to where I live in South London for seven or eight years before this, focussing on interesting characters who I met in my everyday life.

So, in essence, Crossing Paths has been a few years in the making. However the main project really got going properly in early 2011 when I branched out to cover the whole of London, then the across the South East of England shortly after and then later in the year, the whole of the UK.

Is the project self-initiated, or a great commission ?

Yes, it’s a personal project – my own record of characters I’ve met throughout the UK in these past two years.

Where and why do you go to the particular towns, how do you choose the locations? What are the logistics of traveling around?

I stop at towns where I happen to be for commissions as a commercial photographer, places where I’m on holiday with my family or occasionally I just take short trips out.

You were asking your Facebook readers and Twitter users about their favourite towns, what was the aim of that ?

Having visited so many towns across the country this past year, I was interested to know if people had favourite towns and what their relationships with those towns was. A pattern seemed to emerge whereby those of us who now live in the large conurbations still have huge fondness for the smaller towns where they either grew up or in many cases went to college or university.

How does your use of social media play into the project?

Social media users, particularly those on Twitter, are extremely supportive of other liked-minded people. Building a core audience which can get involved in a project from the beginning is a great way of generating support and driving a body of work on. Starting a large project such as this as an individual with no formal or financial backing can be extremely daunting and hard to pull off. So the goodwill and encouragement of peers and friends is a huge benefit. In many ways I feel those who have joined in and spread the word about Crossing Paths are part of the story too.

However, other than generating support, I haven’t used social media to shape the narrative or direction of the project.

The images are very clean, and it seems hard to place how’ve they been shot. Are they on film or digital ?

They are all shot on medium format film.

How much are you shooting per person?

I generally only take two or three shots maximum per person.

A lot of the locations really seem to fit the clothes the people are wearing, are you moving the sitters to pre-chosen locations, or shooting where you find them?

No I just photograph people somewhere very close to where I first say hello.

What are your feelings on the fashions you see people wearing at present? Is it hard to find uniqueness?  How much do the styles and looks change as you cross the country?

I don’t really have a particular interest in fashion or style. However uniqueness in peoples’ appearance is important to me. British people are not afraid to stick out from the crowd and many positively enjoy being different. One of this country’s great strengths is our ability to be individuals and be proud of that. It is also a sign of our nation’s tolerance that in most cases no matter what your age, sex, ethnicity or social background you can be as you wish, wear what you like and walk down any high street without feeling alienated.

As to finding unique people, I suppose we are all unique – it’s just some people are more unique than others and I seem to have a knack of finding of them.

How are you choosing people in the street, what are you looking for? Is there a type of person you look for?

I can’t say how I choose a particular person because I don’t know. They are all just people who walk by me, cross my path and catch my eye. However, looking through the project as a whole, one common theme that seems to connect all the individuals is a certain charisma and confidence.

How much do you interact with the people, a few minutes, or are you also interviewing them/chatting away?

Being a photographer is a great excuse to meet and find out about great people. Through my teens and into my 20s I was a very shy person. However I gradually grew out of that and now there is nothing I enjoy more than stopping and chatting to whoever I meet – shooting the breeze as they in the US. Some people I speak to for quite a while, others just a few seconds. However I don’t interview them. This is solely a visual project.

What is the outcome of Crossing Paths so far, has the project been exhibited or published?

I hope to exhibit the pictures at different locations across the UK. I would also like to spend more time taking portraits in areas near to any exhibitions I can organise. Publishing is another possibility but I haven’t got any plans at this stage.

How do you view the work, is it documentary? Or portraiture?

I hope the project stands as a social document about people on the streets of the UK at this time.

Many thanks to Niall for sharing the work.