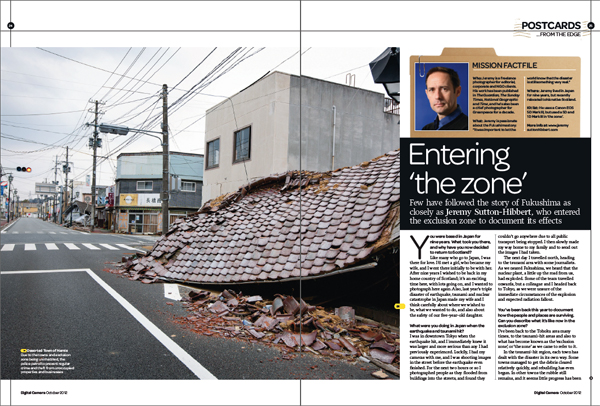 Digital Camera Magazine, in UK,  have this month (October 2012 issue) featured a 4 page interview with me and a series of images that I shot inside the nuclear exclusion zone that surrounds the Fukushima Daiichi nuclear plant in Fukushima, Japan.

On March 11th 2011, late on that quiet Friday afternoon, Japan suffered a triple catastrophe of the Magnitude 9 earthquake in Tohoku, followed by a devastating tsunami which raged inland, and then three nuclear reactors suffered explosions and subsequent meltdown at the TEPCO owned Fukushima-Daiichi nuclear plant. I knew immediately that in my job as freelance press photographer, based in Tokyo, I was going to be busy, I was going to visit these places. And I did, for the next year and a half until I recently left Japan I visited the Tohoku tsunami-hit area to cover stories, and I entered the evacuated villages and cautiously ventured into the 20km nuclear exclusion zone which was put in place around the stricken Fukushima Daiichi nuclear plant. The majority of these jobs were on assignment for The Times and The Guardian in the UK.

The Digital Camera Magazine feature and interview covers my time reporting on the Fukushima nuclear disaster, how, as a press photographer, I approached a subject like that and how I took care in what is obviously a very radiated landscape. I’m very happy that the magazine, and the commissioning editor and interviewer Marcus Hawkins, lets me tell the story and the plight of the area and the people, and thankfully the article doesn’t dwell on me, or my cameras.

I’m not sure how much longer the magazine is on the shelves of all good newsagents, but it is in the shops at present, or available via the magazine’s website. The spread as reproduced below.

You can click here if you’d like to see more of my photographic work covering the disaster in Tohoku and Fukushima, Japan.