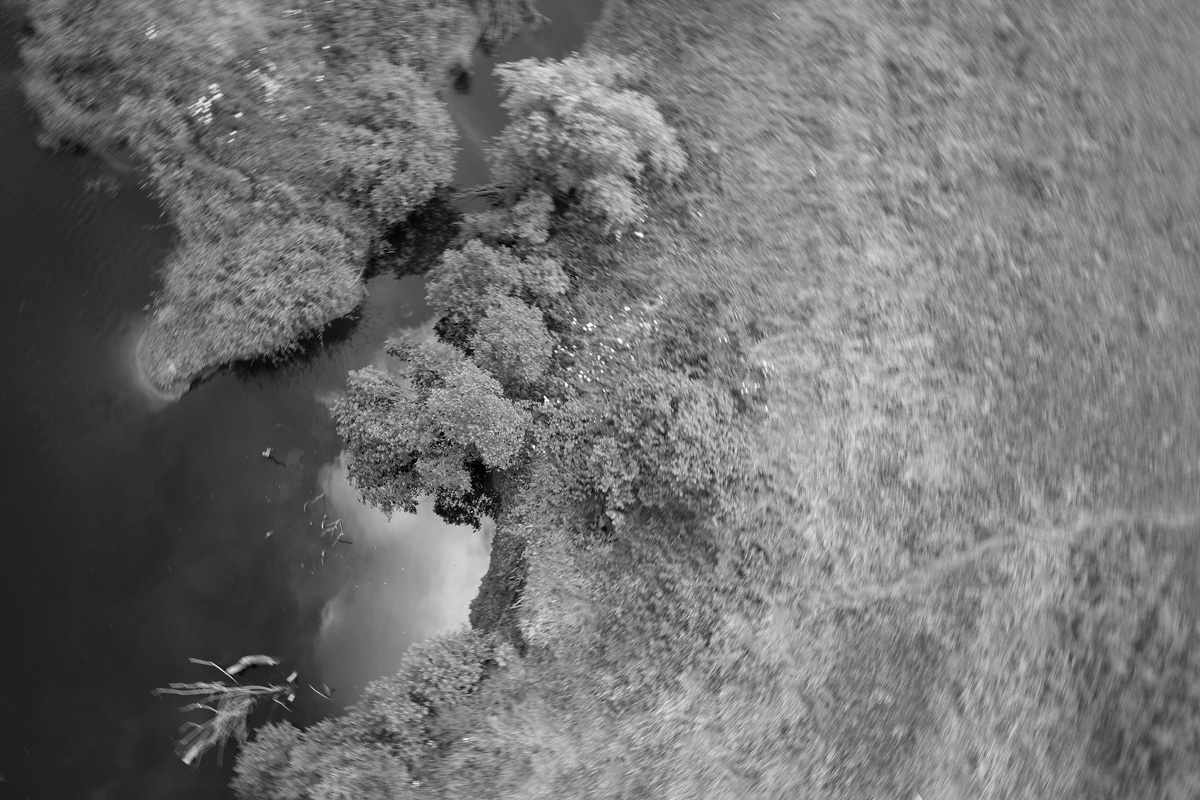 Frank McElhinney’s work first came to our attention in 2014 when he won first place at that year’s Jill Todd Award for his intriguing, unique aerial photographs. Since then this prolific artist has gone from strength to strength, creating several bodies of work focussing on Scotland’s landscape and how it relates to our country’s past, both near and distant. One of these, Adrift, is currently on display at Street Level Photoworks, Glasgow, as part of Tabula Rasa II. Here, he speaks to Sarah about his projects, processes, themes and methods.

SAF: Frank, you graduated from the Glasgow School of Art in 2014. Can you tell us a bit about how you got into photography? What were you doing before you became a student?

FM: After working in manufacturing for 20 years I decided out of the blue to become an artist. I attended several different night classes whilst building up a portfolio for entry into art school. So it’s a rather mundane answer I’m afraid, but I got into photography through adult education courses at Glasgow City College and GSA.

SAF: Your degree show plans were forced to change when the Mackintosh building caught fire in May 2014 – can you explain how this affected your work?

FM: Yes, it was a bit of a shock at the time. I’d spent over three years working on a project about the Battle of Bannockburn whose 700th anniversary was to coincide with the degree show that never happened. The main affect on my own work was the instillation of a great sense of urgency around production. Three days after the fire I went to the source of the River Forth at Loch Chon and began making a series of kite aerial photographs that won first prize in the Jill Todd Photography Award. The drive towards constant production has stayed with me.

SAF: Speaking of the work you entered into the Jill Todd competition, how did you come to use the kite for making your photographs? Were there any technical challenges to this approach?

FM: Using the kite came from the need to make one specific picture. At the Battle of Bannockburn thousands of people drowned in the burn and the River Forth. I wanted to photograph the confluence of these two bodies of water from above and the kite was the simplest way to achieve that perspective. The kite is literally a joy to work with. The only challenge is the wind itself. Too much gusting and the kite will crash, not enough and a long journey might be wasted.

SAF: Your recent work, Adrift, also uses aerial photography – this time, to respond to the current migration crisis with reference to areas of Scotland once inhabited by subsistence farmers. The link is an oblique rather than an obvious one – can you tell us more about your process with this project and how you decided which locations to concentrate on?

FM: Even sympathetic media coverage of today’s migration crisis often represents refugees in problematic ways. I chose not to photograph people at all but to look instead at migration through the lens of Scottish history. The Scottish diaspora has affected all parts of the country but I focused on abandoned settlements in the Highlands and Islands. I was inspired by the early work of Tom Devine who described how the Highland Clearances were underpinned by ethnic inferiorisation of the Gaels and resulted in an almost complete cultural erasure. Whilst working on a previous project I’d also been struck by the fact that even today, of the 45 most populous cities and towns in Scotland only four of them appear on the northern side of the map.

SAF: Your work creates interesting visual conversations between past and present – responding to current events while illuminating Scotland’s history. You mention a previous project – 45 Sun Pictures in Scotland, for which you used another type of alternative photographic process – pinhole photography. Can you tell us a little about how that work came about?

FM: In September 2014, I was on a month long residency in Cromarty. At the beginning I held a workshop for local people where we made pinhole cameras, filled them up with photographic paper and tied them on lampposts and trees around the village. At the end of the month we retrieved and scanned the images that had been burned into the paper. Looking at those abstract ‘solargraphs’ with the sun tracking across the sky, I reflected that the fate of the entire nation was being decided during the exposures. Within a few days of the referendum on independence it was clear nothing had been settled, the country was still pregnant with change. Solargraphs seemed an appropriate way of saying something about that unexpected situation. So I made 200 pinhole cameras and installed them around Scotland’s 45 most populous cities and towns. I made a picture of Scotland that was, in the end, woefully incomplete.

SAF: It’s almost as if, through your practice, you’re creating alternative geographical surveys of the land – linking the physical terrain to more abstract ideas about identity and nationhood, with reference to events both recent and ancient. There are definite strands running through your work, though the subject matter changes. What projects do you have planned for 2017?

FM: When I look at the land I see history and I think about how I can use history to address contemporary issues, (such as nationhood, conflict and migration), rather than simply represent historic events or the land itself. I like your description ‘alternative geographical surveys of the land’, but at the same time I am also making alternative histories that connect with the present.

Looking ahead I have two new exhibitions in development for 2017 and 2018. The first relates once again to migration but looks even further back in time to the old Roman border between Caledonia and Britannia, the Antonine wall – this will be shown at the Auld Kirk Museum, Kirkintilloch, in April and May 2017. The second project is a collaboration with John Farrell, whom I met at art school. John and I were born and raised in Lanarkshire a few miles apart, and that’s where the project is based. Our working title is Coal, Steel and Earth. I am focusing on Kingshill Nature Park, formerly the site of a pit where my maternal grandfather worked as a coal miner. John is focused on what remains of Ravenscraig steelworks, where coincidentally my paternal grandfather worked as a platelayer. The exhibition is provisionally planned for 2018, at Summerlee Museum of Scottish Industrial Life. Beyond these immediate projects I have a few ‘slow burners’ including that lost project that claims me every time I drive up the A91 past Stirling and look out over the long loop of the burn as it flows into the Forth. I used to think that the moment for Remembering Bannockburn had gone up in smoke forever, but there is still work to be done out there.

Thank you for taking the time to speak to us, Frank. We’re really excited to see where your work takes you!