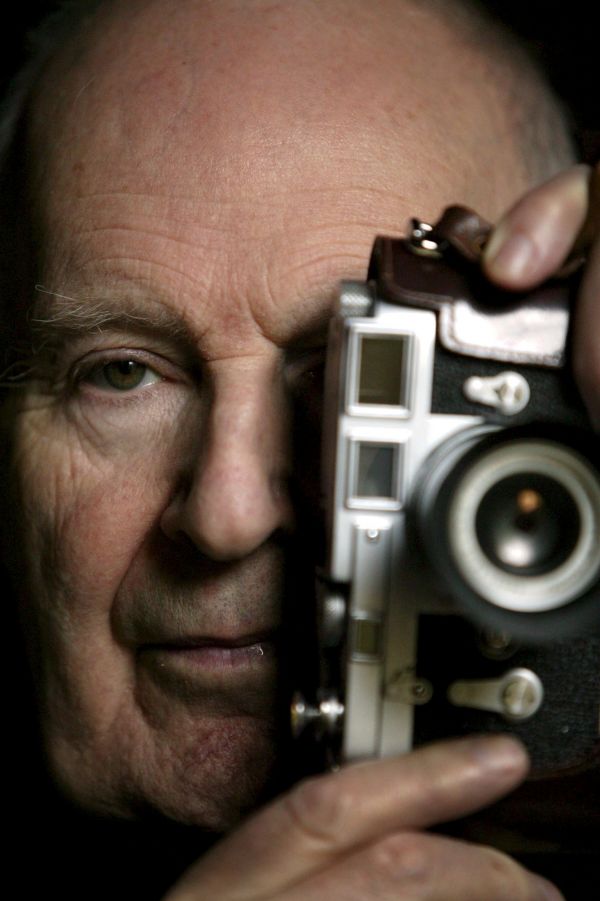 JOSEPH McKenzie had a secret.

For the last 35 years of his life, the man known as “the father of modern Scottish photography” stopped exhibiting his pictures, withdrawing from public life. In the eyes of the world, he had retired, retreated to his home in Tayport, on Scotland’s east coast, with its long view over the firth to Dundee. His death on July 5th, 2015, at 86, prompted obituaries composed around a minor key of regret – here was a man of great ability whose work had been neglected, nearly forgotten by the public and the arts establishment.

Yet, all the time, all through those decades when his reputation faded like an old photo exposed to sunlight, McKenzie kept his secret: he was still taking pictures. He just wasn’t showing them.

He took photographs right up until a few days before he died. He developed his own work, as had always been his habit, writing title and date on the back in neat black pen, and adding the new pictures to the great stacks of prints that had come before. The result, as his son Frank puts it, is “one of the largest single artist photographic archives in the world”. In addition to tens of thousands of pictures, a great many unseen, there is an unpublished autobiography, a diary, poetry, and footage of McKenzie talking about his work; all the ingredients for the major retrospective exhibition, books and a documentary which the family hopes will follow.

“We’d like to get recognition for what he achieved,” says Frank. “We are also going to try to get an OBE posthumously for him. He deserves it.”

Frank is 57, the eldest of five children. We meet in the Victorian villa where Joseph McKenzie lived and worked and raised a family. Frank leads the way through the kitchen, opens a door, pulls back a curtain, and reveals the darkroom. Here is where all of McKenzie’s most celebrated work emerged from its chemical crucible, those moody, melancholy black-and-whites of 1960s street life: pie-sellers and gossip-mongers in cobbled Dundee; petrol-bombed homes in troubled Belfast; the Gorbals Children series, in which kids grimed in snot and jam play merrily in the Glasgow slums.

The darkroom has a low ceiling and white wood-panelled walls. McKenzie feels present through his tools. Two old Leicas rest in their case. A magnifier stands on top of an enlarger, and it is easy to imagine the photographer hunched over, squinting into the lens. A pair of white linen gloves sit on a cabinet, one placed neatly on top of the other. His hands, his eyes, his vision. This feels like a shrine, a place of relics and transubstantiation – flesh into film into art. Brown bottles of sodium metaborate stand, sacramental, on a shelf. Listen carefully and you can almost catch Tangerine Dream and Benjamin Britten and recordings of the John Peel show, the music McKenzie used to listen to here, drifting in from the past.

“Joe was a master printer,” the artist Calum Colvin had told me a few days earlier, emphasising how important, almost sacred the darkroom had been for his former teacher at Dundee’s Duncan Of Jordanstone College of Art. “He invested an emotional quality in the printing. They are visual poetry, really. I think he felt that there would be a revealing of his greatness after his death.”

Frank McKenzie nods when asked about this. Did his father wish for his work to be seen once he was gone? “He always wanted the recognition, but on the other side he was almost frightened of recognition. My personal analysis is he feared rejection. Because he’d had a lot of rejection in the early parts of his life. All the turmoil that he’d been through, I think he felt rejected. Parentally, he felt rejected. He always felt that he was a mistake and his mum didn’t really want him. There were some deep psychological fears of rejection.”

Joseph McKenzie was born in the east end of London in 1929. His father was a clockmaker left bankrupt following trouble with a business partner. The family knew real poverty and the sadness that came with it. Material possession were few. When, aged ten, McKenzie was evacuated to Dorset, he did not even own a bag and had to carry his pyjamas in a pillow-case sealed with tape.

“He felt his life had been a struggle from the day he was born,” says Frank, but it was struggle which gifted him an empathy for the difficult lives of others. “Because of my own deprived background I could identify with the children’s feelings; there was a rapport between us,” he wrote in the preface to his book Gorbals Children. An impoverished upbringing was not, he went on, insurmountable; then, thinking, perhaps, of his own childhood, “It is the hang-up of being unloved, unwanted, which is a real and permanent disadvantage!”

In 1947, McKenzie was conscripted into the RAF and spent three years as a corporal in the Photographic Corps. While stationed in Germany, he met his future wife, Shelly, who is Dutch and Catholic and inspired his conversion to that faith. In 1954, the year in which he joined the Royal Photographic Society, he began to teach at St Martin’s in London. Ten years later, he and his family moved to Scotland, where he headed up the new photography department at Duncan of Jordanstone. That year, 1964, also saw him embark upon his Gorbals Children study, inspired by the paintings of Joan Eardley; the show toured in 1965, marking the start of a run of work and exhibitions in which McKenzie was established as a soulful and sympathetic chronicler of the working class.

In the early 1970s, there came a fork in the road. McKenzie had spent the last years of the previous decade travelling within Ireland, taking photographs – titled Hibernian Images – which contrasted the peaceful rural life in the Republic with the sectarian violence of the North. For a show of this work in Aberdeen, he submitted a catalogue statement which he claimed was then altered by the gallery to remove text which the curators seem to have felt appeared sympathetic to the idea of armed struggle against the British state.

“My father went berserk,” Frank recalls. “He said, ‘This is censorship. You have no right to do this.’ And that’s when things really busted up. He just withdrew. He said, ‘Well, if I can’t show my work in the way I want to show it, I’m not showing it.’”

This was when McKenzie stopped exhibiting new work in public. Between 1974 and 1980, he turned part of his home into a gallery which could be viewed by appointment, and in 1987 there was a retrospective in Glasgow, but after that – nothing. This feels, looking back, like an act of self-sabotage, even a sort of martyrdom. “Joe was a great one for thinking about sacrifice,” says Calum Colvin. “He felt that his integrity had been sacrificed by that incident to do with Hibernian Images. He felt that he was suffering, in a sense, for his artistic beliefs.”

Albert Watson, who went on to have a high-profile and successful career in the United States, was a student of McKenzie’s in the mid-1960s. He finds his old teacher’s decision frustrating. “He had a lot of self-doubt. But you can’t blame the world. You love photography? You pick up a camera and shoot.”

But can’t one counter that with the JD Salinger argument? We can choose to be frustrated that he wrote stories and then hid them away in a drawer, or we can be grateful that the few books that do exist are exquisite. “Yes,” says Watson, “in a way you are right. You can say, ‘Well, the Gorbals Children – he did that.’ And I do think those pictures are terrific. I feel very positive about Joe. But my observation is that he could have done more.”

Anna Robertson, head of fine and applied art at Dundee’s McManus Gallery, which owns a major collection of McKenzie’s photographs, believes he backed himself into a corner with his decision not to show new work publicly. “As a very honourable man who lived by a series of beliefs, it would have been difficult for him to come back from that,” she says. “To say he saw the world in black and white is a trite thing to say about a photographer, but he did. He had a highly developed sense of what was morally right and wrong, and what was right and wrong for him. There weren’t shades of grey in his own life, and he felt he had to take these stances.”

It’s an interesting thought: the stubborn, awkward, damaged, morally outraged side of his personality which drove him to take such brilliant photographs of poverty and turmoil may have been the very character traits which made him unable, or at least unwilling, to keep on taking and showing them. For, although he continued to work, his photographs were very different from what had come before.

“His work became more introvert,” says Frank. “He started looking more around the home. He took pictures of family. He took a lot of stuff around the local area. He liked taking walks along the Braes in Tayport, and down the harbour.

“So, yeah, he carried on photographing, but it was closer in. You can see that he went from being a man who challenged the world to a man who imploded – gradually, gradually, gradually until he condensed down to the immediate vicinity, and you can see what he ended up doing. Everything he did in the end was around here in the garden.”

These, then, were the last photographs of Joseph McKenzie – careful, tender, even obsessive studies of flowers and leaves and overgrown paths. Humans are absent, but his own humanity is not. They are in colour, they were taken on digital cameras, and they seem to contain within them an infinite sorrow.

Perhaps, though, it is wrong to see these pictures as sad. McKenzie loved his garden, according to his priest and friend Father Aldo Angelosanto, and he would have regarded photographing it as using the gift God gave him in the service of representing the mystery of God’s creation. “He felt his Catholicism deeply,” says the priest. “He put his soul into his photographs.”

Father Aldo conducted McKenzie’s funeral at Our Lady Star Of The Sea in Tayport, a service attended by family, students and friends. Among them was Graeme Murdoch, former chief executive of the proposed Scottish National Photography Centre.

“One of the hymns had the words, ‘You fear the light may be fading. You fear to lose your way,’” Murdoch recalls. “I think that was Joe; why he kept taking pictures right up to the end.”

A selection of Joseph McKenzie’s photographs from the Women Of Dundee series, on loan from the McManus, will be shown at Stills: Centre For Photography, Edinburgh, February 6-April 10th, 2016

Thanks to Peter for graciously allowing us to reproduce this article, which had first appeared in the Journal Magazine of the Royal Photographic Society.  And thanks to Adam Elder for allowing us to use his portrait of Joseph McKenzie.