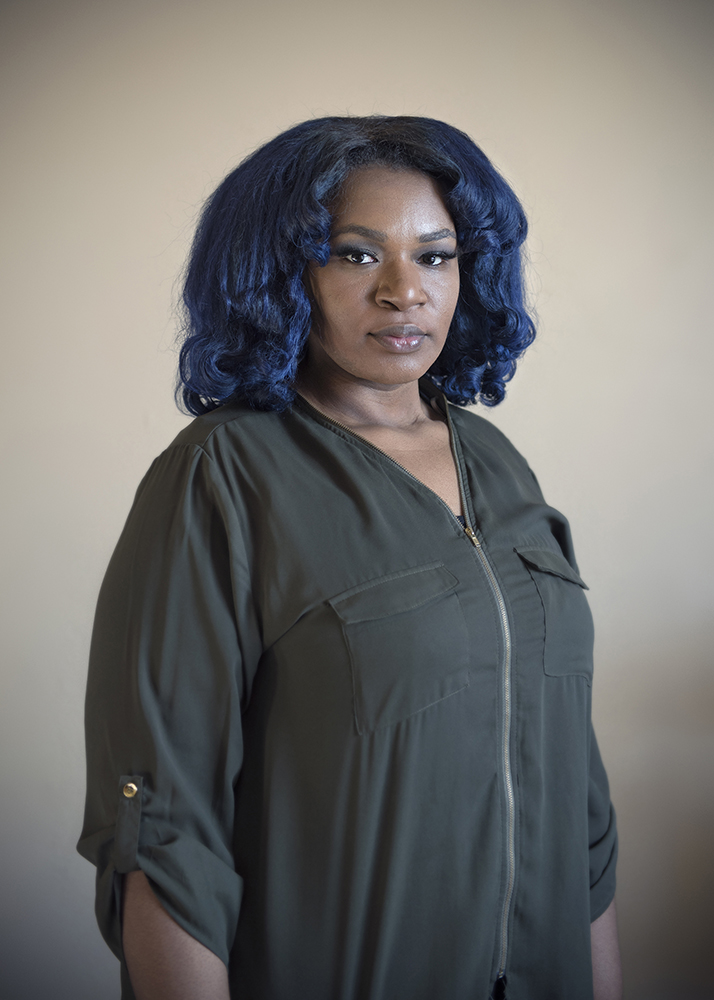 Nevertheless, She Persisted by Mhairi Bell-Moodie

Mhairi Bell-Moodie’s work, Nevertheless, She Persisted telling the stories of women who have faced adversity is currently being exhibited at Out of the Blue in Edinburgh.

Mhairi worked closely with 25 women who have overcome child loss, domestic abuse, rape, self harm, body dysmorphia, suicide attempts, breast cancer and much more. We spoke to Mhairi about the work and her exhibition….

DS: Can you introduce us to the project project Mhairi –  why did you start this, what’s it about?
The idea to create a body of work around women came to me in November 2016. In one week, I’d photographed two women who gave me some really positive feedback – both on the process of being photographed and with the end results.  They’d both been going through a tough time (chemo and bullying) and I wondered how I could use my skills as a photographer to help other women feel stronger.

One of the women was a friend of a friend.  Mette ended up being in the project but it was still a few months before I had a fully formed concept.  In early 2018, I researched as many women’s issues as I could think of and contacted several charities asking if they would be interested in teaming up to help me make some meaningful work.  SANDS Lothains, Breast Cancer Now, Edinburgh Women’s Aid and Changing Faces all put me in touch with women who were keen to be involved.  The rest of the participants answered my socail media shout outs.  Before I met any of the women, I told them a bit about myself, showed them my previous work, and explained what I hoped to achieve with this project.  I reassured them that anything they told me would be kept confidential until they decided to commit, and always made sure to give them time and space to think about it before deciding.  It was important to me to spend time building a relationship with the women as they had trustsed me with some very intimate details of their life.

DS: “Nevertheless, she persisted” became something of a strapline in the US last year, is this why you chose the title? How do audiences respond to it here?
I wanted a title which could encompass many stories.  With 25 women involved, it was important that the title was relateable to all of them – and to audiences.  The response to the title was very positive – many of the women said they felt like it fitted them perfectly.  Many of my friends said it was also appropriate for my own journey.  Several people have also commented that the loved the title and that the words have given them strength.  It was great to have such a positive response before I’d even released any of the images.  When Chelsea Clinton tweeted about the exhibition, I saw someone comment that they had never understood the title of her book (She Persisted) until he saw my series and realised the struggles we face.  That really touched me.

DS: Can you talk a little about your approach visually and how the images help tell these womens’ stories.
The aesthetic of the project ended up quite different from the original idea, but I think I made the right decisions in the end.  Almost all of the women were photographed in their own homes.  My first shoots were wider, including more of their environment.  However, apart from Nicky, whose portrait was taken in her stillborn son’s empty nursey, I found it hard to visually communicate their stories through their envirnoments.  I decided that it would be more effective to create strong portraits and tell their stories seperately.  I asked the women to write hand written postcards with comments on their journeys.  It was important to me that the women had some ownership of the project and I think doing this worked well.

The project has taken me on my own journey.  I’ve been affected by all the stories and the women have become very important to me.  They trusted me with their stories and I felt a huge responsibility to share them respectfully.  Because I worked with each woman one-on-one, they weren’t really aware of the scale of the project or the other stories.  It was really rewarding to see them support each other when I started sharing their stories on social media.  They have all said how honoured and privileged they are to be part of something with so many other strong women.  I think many of them women didn’t know their own strenghts when I first met them, but I have really seen them grow in the few months I’ve known them.  It’s been a rollercoaster ride for all of us and I’m delighted that the project – and the women – have received so much support.

Thanks so much for taking the time to talk to us Mhairi and congratulations with the exhibition.

Nevertheless, She Persisted telling the stories of women who have faced adversity is currently being exhibited at Out of the Blue 30–36 Dalmeny Street, Leith, Edinburgh, EH6 8RG until 18th May 2018.