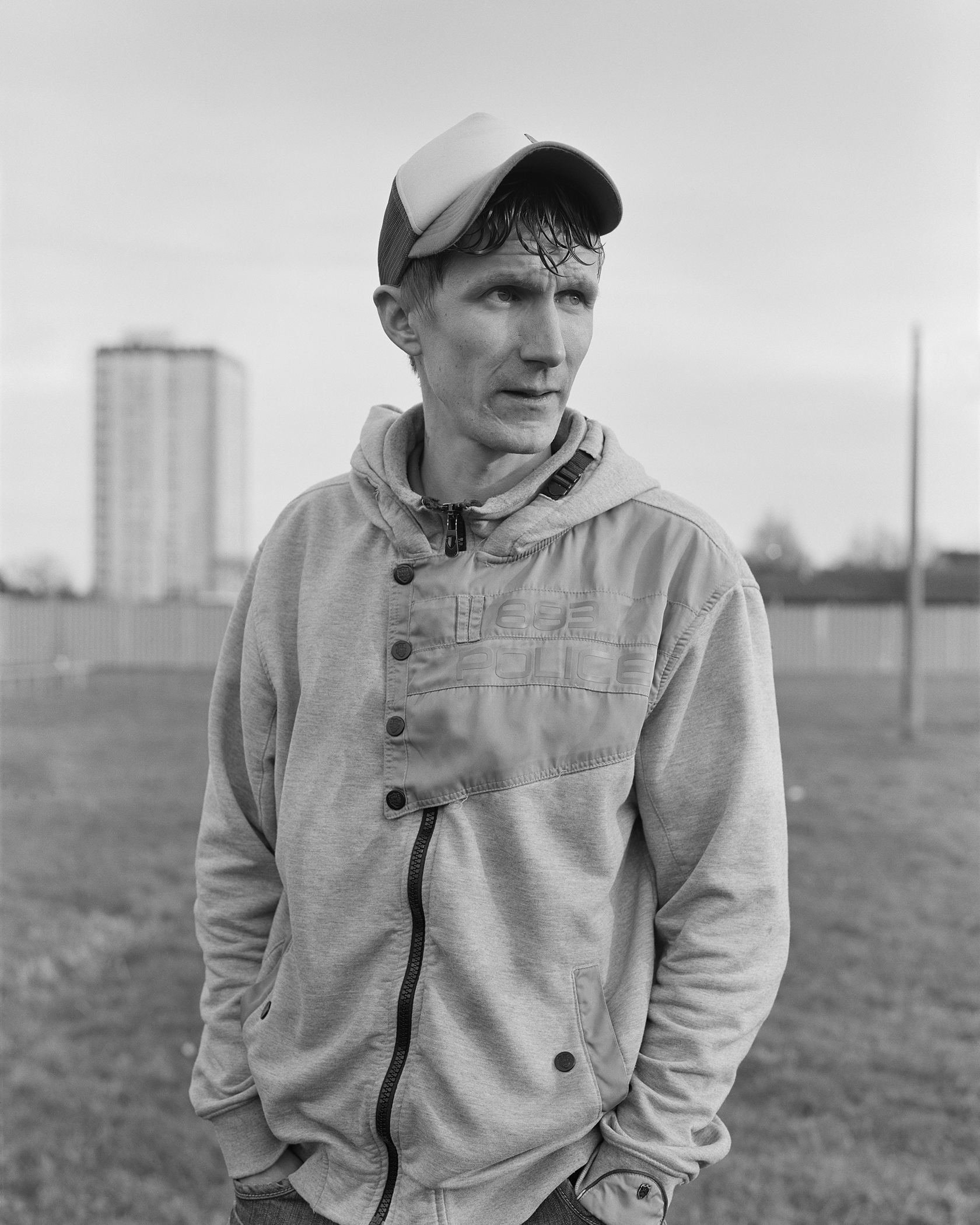 “No Ruined Stone” by Paul Duke

Paul Duke’s new book of photography, No Ruined Stone, reminds us that the places in which we grow up rarely leave us, they exert a pull across the decades and often force us in later life to re-examine how we have become the person we are today.

Muirhouse, built in the 1950s as a council estate to the west of Edinburgh has had a troubled recent history with substandard high-rise housing, chronic unemployment and endemic drug use among many of its younger residents creating seemingly intractable social problems. It has also had a reputation for strong community spirit and looking after its own as Scottish legends and former Muirhouse residents, Gordon Strachan and Irvine Welsh, can attest to. Photographer, Paul Duke, also grew-up in Muirhouse, and although he left to study and then work in London, family roots have repeatedly drawn him back and recently he decided that photography was the ideal way to re-connect with the community that dominated his childhood years.

In, No Ruined Stone, Paul’s black and white landscapes and portrait photographs are enigmatic and loaded with the kind of symbolism that only someone with a deep and complex knowledge of Muirhouse could achieve. Long-overdue re-development of the housing stock is re-shaping the estates and the clash between undergoing construction and the natural world that tenaciously clings on around these zones provides many of the strongest images in the book. Locals, who Paul encounters in and around the neighborhood, are photographed as they are found, the exchange seems natural and there is little attempt made to heroise.

To find out more about this new body of work, Document Scotland asked Paul to elaborate on the impetus for returning to Muirhouse to shoot the photographs which make up No Ruined Stone.

DocScot: Tell us about your history with Muirhouse? How has it changed since your early days there?

PD: I was raised in Muirhouse and lived there for the first eighteen-years of my life. Despite the fact that poor social conditions made it a very tough place to grow up, I had a very happy and loving childhood there. My formative years were greatly shaped by a strong maternal influence and two inspiring and very brilliant young art teachers at school, Richard White and Maldwyn Stride. My mother brought up two boys on her own, it wasn’t easy for her emotionally nor financially, but she was determined to keep us out of trouble and instilled in us both, strong moral values. My brother, like me, went onto study at the Royal College of Art in London – that meant everything to her, to break the mould of expectation for young men from a deprived Scottish housing estate.

My father moved back close to the area some time after my mother left, so I returned fairly frequently to visit him. I still have relatives who live in the area to this day.

The physical change has been significant – my house, school and a big chunk of the original Muirhouse estate have been razed to the ground as part of an urban regeneration scheme. However, many of the social ills that dogged the area back in my early days are still unfortunately prevalent.

DocScot: When and how did the idea come to you to take a series of photos? Were you focussed on what you wanted to achieve or were you just seeing what you saw?

PD: I knew during the making of the ‘At Sea’ project that I wanted to return to Scotland to make more work. Both my parents passed away around that period of time therefore it felt timely to continue to explore my own Scottish identity as well as this notion of national identity, which interests me greatly.

There was a strong pull to go back to my roots and I knew from the beginning that I wanted to make a body of work that celebrated the fighting spirit, dignity and hope of the residents living there today – I was very focused on that but always kept my eyes open. I made the project over two years so it was a very organic and intuitive experience. Working with a large format camera slowed down the process of making photographs – this was intentional. I also wanted to play with the visual language, to create a narrative that struck the balance between objective documentary and a subjective project.

DocScot: How did you explain to interested observers what you were upto?

PD: Muirhouse is a small close-knit community and word gets around quickly. I made early visits to walk around and meet people before I started making any photographs. After that, I made regular monthly visits and never missed a trip over the whole period of making the project – it was really important to be consistent. Residents therefore got used to seeing me around, trust and familiarity followed. The warmth, kindness and support I experienced when I explained what I was doing, was humbling.

DocScot: Was it important to shoot in overcast or non-summer weather?

PD: The most important thing was to always keep things free. I never allowed myself to get caught-up in lighting preference as I had no control over that – everything was shot with natural light. I made the most of the light I had to work with on any given day and enjoyed the challenge.

DocScot: How did the book come about?

Last year, I approached German photo book publisher, Hartmann Books. Markus Hartmann was previously director of photography at Hatje-Cantz before setting up his own publishing company. Markus was raised in Berlin and I think the photographs and subsequent social message I had created struck a personal chord with him. Markus and his team were therefore very keen to publish the series.

DocScot: What kind of future do you think Muirhouse has and are you likely to have any role in that?

PD: In terms of the residents, yes, Muirhouse has a good future. I had the great privilege to make friends with a handful of dynamic, committed and inspiring community activists. If developers and politicians consult these individuals and others like them over the course of time, then I am confident that Muirhouse will successfully deal with the pressing social inequities that exist, but only with their consultation.

I have no immediate plans to take on any active role but I have expressed some future involvement. However, I do hope in the interim that the content of the book highlights social inequity, challenges deep-rooted class prejudice and offers a far-reaching insight into a deprived and disenfranchised community.

DocScot: What you are up to in the short-medium term and how is your photographic practice developing.

PD: I am currently developing a new project, again based in Scotland. It’s still in the germination period so not a lot to expand on at this stage, but I do hope to start shooting in earnest this coming September. This project will form the third and final part of a trilogy of works exploring modern day Scotland.

Many thanks to Paul for the interview and for sharing his work. The book, No Ruined Stone, is published by Hartmann Projects and can be bought here…http://www.hartmannprojects.com/publications/paul-duke-publication