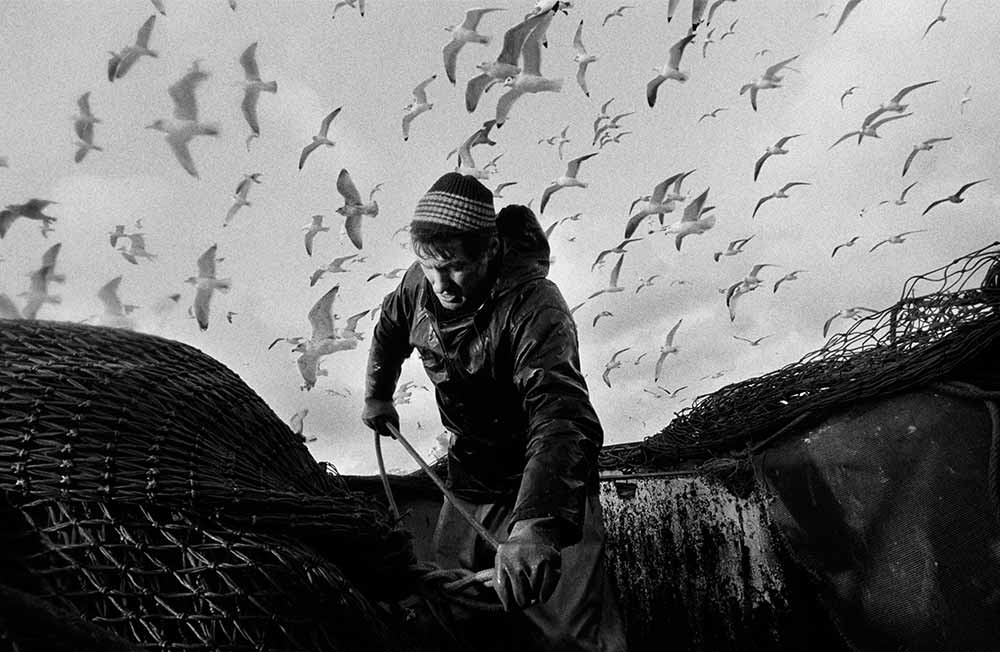 In Scotland’s Season of Photography, the Scottish Fisheries Museum is delighted to be hosting a striking exhibition of black and white images shot by Jeremy Sutton-Hibbert aboard the seine net fishing boats, Mairead and Argosy, in the North Sea in the 1990’s. These images capture the reality of the life at sea for the fishermen of Scotland’s North East fishing communities – the cramped conditions, the monotony, and the grueling work in harsh conditions.

Here, Jeremy talks about how the work came about:

“Considering I come from a land-locked family I’ve done my fair share of bobbing about on the waves of the planet, and no sea has more bobbing than the North Sea (although going through the 40degress and 50 degree latitudes of the Southern Ocean was quite interesting). The North Sea – “a confused sea” as it was once described to me and, as one fishing trawler skipper told me, late at night, only the instrument panel lighting the bridge room, “the north sea, she’s a cruel mistress”.

I think my first experience on the North Sea was on a fishing trawler, on an overnight assignment photographing fishing trawlers for a paper. There was a fisherman’s protest, lots of trawlers all together, protesting latest EU rules and regulations, net sizes and quotas. I got sent out to photograph. It was a night of adventure: watch dawn rise, shoot the other boats, back to harbour, home by lunchtime. The skipper that night, Ronnie, was a decent chap. I asked him how long he usually goes out for at a time, “10 days”, was the reply. “Can I come next time?” I asked. He smiled, he laughed, he replied, “if you think you can handle it, you can come, but there’s no going back. If you’re sea sick you’ll be sea sick for 10 days”. Count me in.”

The results of this expedition are captured in these striking images which serve as an important record of a period and style of fishing which is already passing into history and the Scottish Fisheries Museum is pleased to be able to provide our visitors with an insight into the working conditions for seine net fishermen, operating far from the safety and comforts of the shore.

We feel equally privileged to be hosting the inaugural display of this exhibition which will then tour other venues nationwide. The production has been made possible thanks to the generous sponsorship of several organisations including Street Level Photoworks in Glasgow, Scottish Fishermen’s Trust, Scottish Fishermen’s Organisation and Loxley Colour Photo Lab.

The Scottish Fisheries Museum-partnered exhibition will then tour to the following venues across the country over the next year:

A related Education Pack developed by the Scottish Fisheries Museum’s Learning and Access Officer will be available for subsequent venues to engage with their local young people.

The Scottish Fisheries Museum will host a talk by the photographer Jeremy Sutton-Hibbert and featured fishing boat skipper Ronnie Hughes on Friday 2nd December, from 6pm.