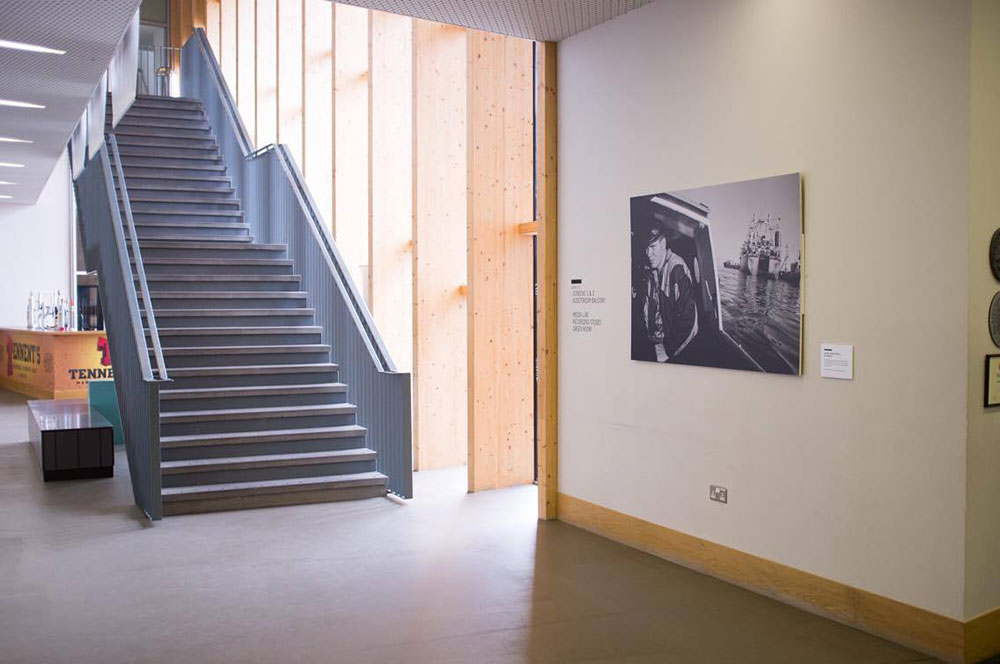 We’re delighted to write that Jeremy Sutton-Hibbert currently has two bodies of work exhibiting with Shetland Arts. North Sea Fishing is showing until August 27th at the Bonhoga Gallery, and Klondykers is showing at the Mareel arts centre for the next year, both in the Shetland Isles.

About the North Sea Fishing exhibtion, Shetland Arts wrote: “Scottish documentary photographer Jeremy Sutton-Hibbert captured the reality of the life at sea for the fishermen of Scotland’s North East fishing communities aboard the seine net fishing boats, Mairead and Argosy, in the North Sea in the 1990s.

These images serve as an important record of a period and style of fishing which is already passing into history, an insight into the working conditions for seine net fishermen, operating far from the safety and comforts of the shore. They capture the cramped conditions, monotony, and the grueling work in harsh conditions.

The North Sea – “a confused sea” as it was once described to me and, as one fishing trawler skipper told me, late at night, only the instrument panel lighting the bridge room, “the north sea, she’s a cruel mistress”.

The Klondykers work (2 images above), shot in 1994, and published as a zine by Cafe Royal Books, looks at the period in Shetland’s history when fish processing ships from the Eastern Bloc countries would come to Shetland waters buying up catches of mackerel and herring from Scottish fisheries. The Klondykers work was written about by Shetland News here on the publication of the Cafe Royal Books. Very limited numbers of the Klondykers book will be on sale fro Shetland Arts during the run of the exhibition.

Speaking to the Shetland News, Jeremy says of his time photographing in Shetland “It was the period when communism had collapsed and Eastern Europe was opening up. To come to Shetland to see street signs in Cyrillic and people in all these foreign accents walking around – it was a fascinating time.

I remember driving out to the garbage dump. A couple of ships had been impounded in the port and hadn’t been allowed back to sea, and the company weren’t paying the crews any wages.

And I remember Shetlanders driving up and giving them packets of cigarettes, or bags of clothes and things. It was interesting to see that Shetlanders were rallying around to help them.”

Klondykers, for the next year, at Mareel, North Ness,, Lerwick, Shetland ZE1 0WQ.

The North Sea Fishing exhibition, on completion of its run in Shetland, will travel onwards to: