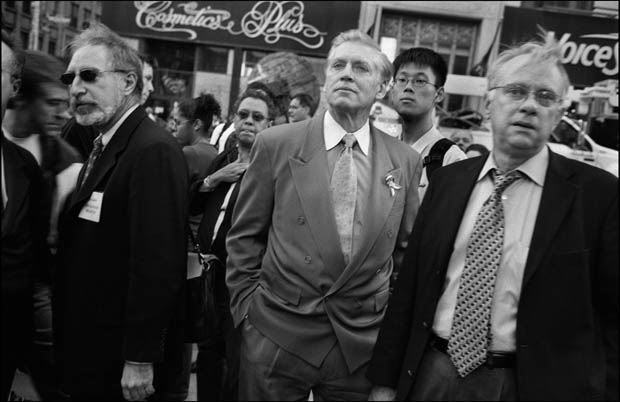 Today whilst driving to a photography assignment near Stirling, Scotland, I heard on the radio that it is September 11th, the 11th anniversary of the World trade Centre bombings by Al Qaeda. There has been much said before about it obviously, and nothing much that I can add, other than I went there shortly afterwards and photographed. It so happened I was there at the time when New Yorkers were able to see “Ground Zero” for the first time. The streets were opening up, and police barriers were moving back on a daily basis, and I worked the street, photographing all the people who came to look, to pay their respects and  pray. I shot for a few days on those streets, and produced a set of images that I am still happy with to this day. You can see those photographs of Ground Zero/ World Trade Centre after 9/11 here.

This image below I remember being one of the early images I shot, and it perhaps drew my attention due to the Scottish Saltire flag I noticed hanging. People from all countries and all nationalities were present. That was one of the most impressive things, the cross section of humanity who came there.

I wrote these words about the images at the time:

I’m in New York. With my good friend Jason I work the streets of Broadway and Lower Manhattan, edging around the perimeters of Ground Zero, photographing. We watch the police barriers move back each day, revealing more and more of the devastation. We watch as tourists and locals alike come to visit, to look, to stand silently, to pay respects. All are there; whites, blacks, hispanics, Jewish; old, young; students, business people, some from out of town, some not. Everyone stands and looks. I photograph the crowds, and no one objects. Dust still falling from the carnage behind me lands on my arms, and every day I’m there from 8am until evening, watching this cross section of humanity. I only work a section of street about 200 metres long, but all pass through, a constant, changing wave of people, a reflection of all nations. There’s a feeling in the air: poignancy, history, fear, solidarity, shock, numbness. All are standing straining to see the carnage, reflecting on the damage and the loss, the loss past and the loss to come.

And whilst on the subject this evening I saw this article about the photographs of American photographer James Nachtwey, from the actual day of September 11th 2001 itself, and how the appearance of his images has been adjusted over time.