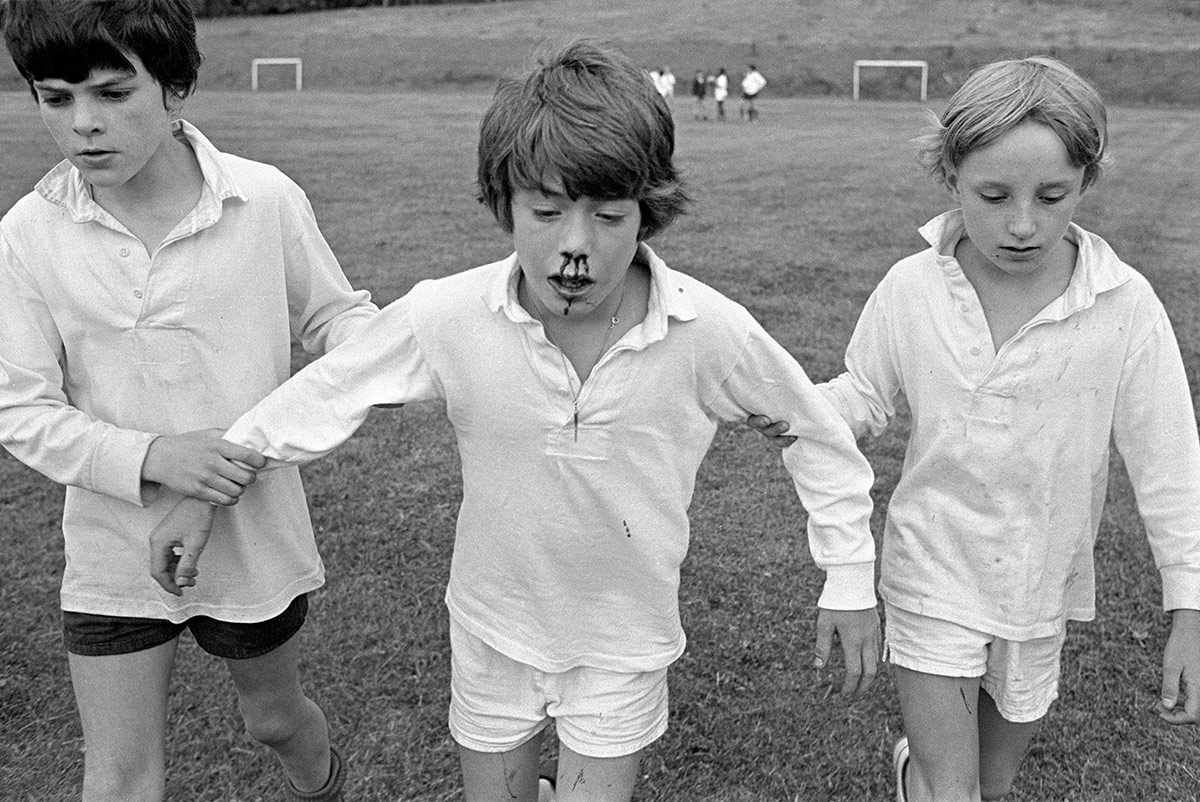 One of the bodies of work we love in Document Scotland is Tom Kidd’s Life in Shetland. So we are delighted to showcase a second body of work from Tom, featuring life in Aberlour House School. Below, Tom tells how the project came about.

I took these photographs during a one-year stay in 1978/79 at Aberlour House School, in Aberlour, which is a feeder prep school for Gordonstoun. (Now moved to Gordonstoun itself. The buildings I shot in are now the HQ for Walkers Shortbread).

The school headmaster Toby Coghill had wanted someone to do a year in life of the school, and asked a contact at Scottish Arts Council if the could put him in touch with a photographer. So I called him and went there for a trial week.
I was promised unlimited access, and was also asked to help out with some photography classes, occasional art classes and with football. Similar I suppose to a teaching assistant nowadays.

I spent three terms there, living in the school. Shot every day, probably about 300 rolls of film, using the same gear as with my Shetland work – a Nikon FM with 35mm mainly, and Tri-x. Occasionally Kodak Recording film 3200…horrible stuff.

The school paid for everything, gave me a small salary, and we had permission from all the parents and teachers.

The kids seemed to accept me fairly quickly. A couple of teachers weren’t so keen on the idea of me being around with a camera. There was an ever-changing selection of prints on display in the school, and I tried not to put anything up that would allow kids to be teased by their fellow pupils.

I don’t remember anyone being unhappy with the way the pics depicted themselves or the school. I think Toby Coghill was worried about what was going to be shown at an eventual show at Stills Gallery in Edinburgh in January 1980, but was happy with how it all went.

A few pics appeared in British Journal of Photography and Times Education Supplement, but nothing since that Stills show. Some of the kids have been in touch recently, and it’s been quite touching hearing their kind words.

I enjoyed my year at the school, enjoyed being with the kids, who with one or two exceptions, seemed happy to be at the school.
It helped me develop as a photographer, and at the time I was influenced and encouraged by photographer friends Chick Chalmers, Mike Edwards, Richard Hough and Gus Wylie, along with the greats like Bruce Davidson, Robert Frank, Garry Winogrand…the usual suspects.

A few images on display at FLOW PhotoFestival in September, but I have no plans for anything else.

With many thanks to Tom Kidd for allowing us to showcase this body of work. See more work from this project on Tom’s site.