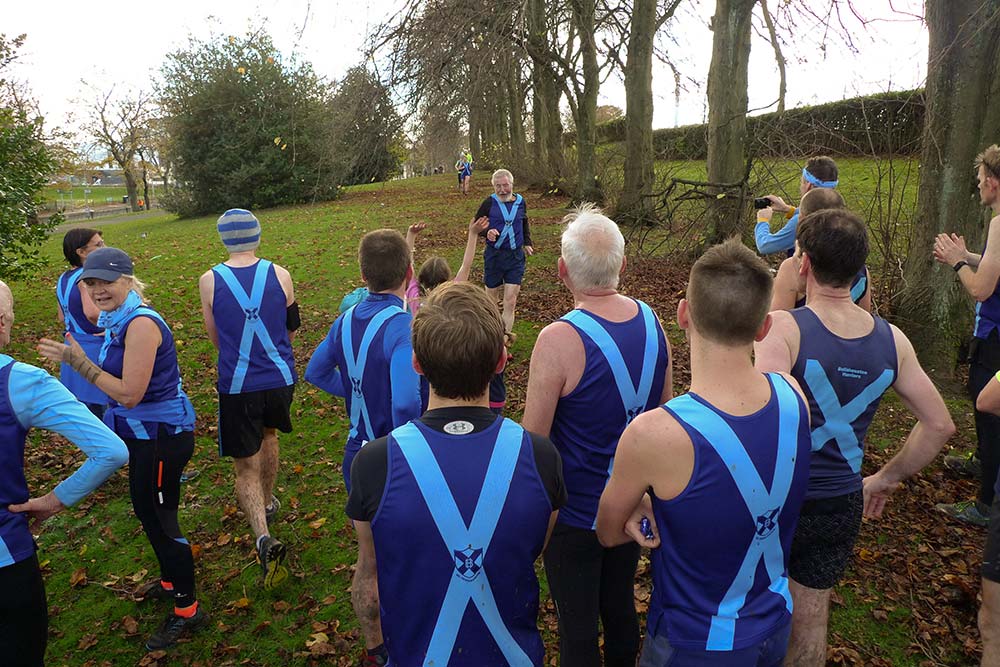 Nil Desperandum – the motto of Bellahouston Harriers running club, a club based in Glasgow’s Southside and formed in 1892. Boasting a long and prestigious history, including Olympians, the club has won many District and National level trophies.

The club this week held a 125th anniversary run, commemorating the first recorded Bellahouston Harriers run on the 5th November 1892, a 5-mile paper chase handicap run which was written about in the Glasgow Herald two days later. As reported by the Herald about that historic run, “the pace throughout was very hot, the leaders passing and repassing each other time and again.”

Jeremy Sutton-Hibbert, who took this portfolio of images, says “I become interested in running about 9 years ago now. Before that other colleagues had invited me out running and I was never interested, but then to combat stress of work in 2009 at the time of the collapse of the world economy I began running. First in the gym, then tentatively venturing outside to run.

Now, I run 3 or 4 times a week, and my interest in taking part in running, and of the sport, has grown enormously. I joined Bellahouston Harriers a year or so ago, to try to improve as a runner, to get faster, to run better. What motivated me to start photographing within the club was seeing and meeting the diverse mix of runners, from young fast guys, to those runners who won’t win the medals, but train and compete anyway for the love of it. But the important thing is there is room within the club for everyone. It’s the same on a Saturday morning Parkrun event, it gives me great joy to see runners of all walks of life, of all sizes, shapes and levels of fitness. To see a heavy-built lady or guy, at the back of the pack, huffing and puffing, finding it hard – those people to me are heroes. I admire greatly  those people who endeavour to get fit, endeavour to look after themselves and their health.

To wear the Bella vest is to pull on a little bit of Scottish running history. To run in Glasgow wearing the iconic light blue St Andrew’s cross vest, and hear shouts of “C’mon the Bella!” from the crowds is a moving experience. I wanted, in this larger photo essay from which these images come, to capture a little of what it means to be a Bella Harriers runner.”

“I joined the club because I was running but not getting any faster, and wanted a more structured training with a network of runners who could support me. To be honest, I’m not actually sure why I run… there’s probably a multitude of benefits there that I can’t quite put my finger on, because it would span multiple paragraphs. Maybe better asking why you wouldn’t run?” – Becky, pictured above.

“I suppose I run because I still can!  It keeps me reasonably fit and healthy despite problems with my knees and hips. I feel a sense of achievement in completing races or time trials even though I’m getting slower but I like to keep a positive attitude with a “hi I’m still running”. It’s great to be a member of Bellahouston Harriers and to be with like-minded individuals. It has a great social side where all are made welcome – I’m pleased to have so many friends in the club. The thing I like best about the club is the support you get in competitions irrespective of your standard (you could be last but you still get a cheer from club mates!)” – John, pictured above.

“Running to me is as much for my mental health as well as my physical. I started running to challenge myself and help me create healthy habits outside my own constraints. After completing a few races and wanted to improve my times, so looked at joining a running club. It absolutely terrified me and took me well over a year to gain the courage to attend a session, however it has shown me how strong I actually am. The club has given me some of the best friends, the best memories and the self-confidence that I didn’t realise I had.” – Steph, pictured above.

“I am a runner, not a jogger. I train hard and am motivated to improve. I run as it gives me a focus. I set myself targets and the thrill is in working towards them, whether that’s nailing a tough session, ticking off another long run or just getting out for some solo miles when the legs don’t fancy it – I always feel better for forcing myself out the door. I joined Bellahouston Harriers in early 2012 just seeking improvement and structure with my running and haven’t looked back. A great club with great people.” – Stuart, pictured below.

“Note to self:  never get photo taken post race! To be honest I joined the club on a recommendation from my 97 year old neighbour who ran for Bella Harriers when he came back from the war.  I think I’ve been running for Bella for about 7/8 years now.” – Mel, pictured above.

All images and text Copyright © Jeremy Sutton-Hibbert 2017, all rights reserved.