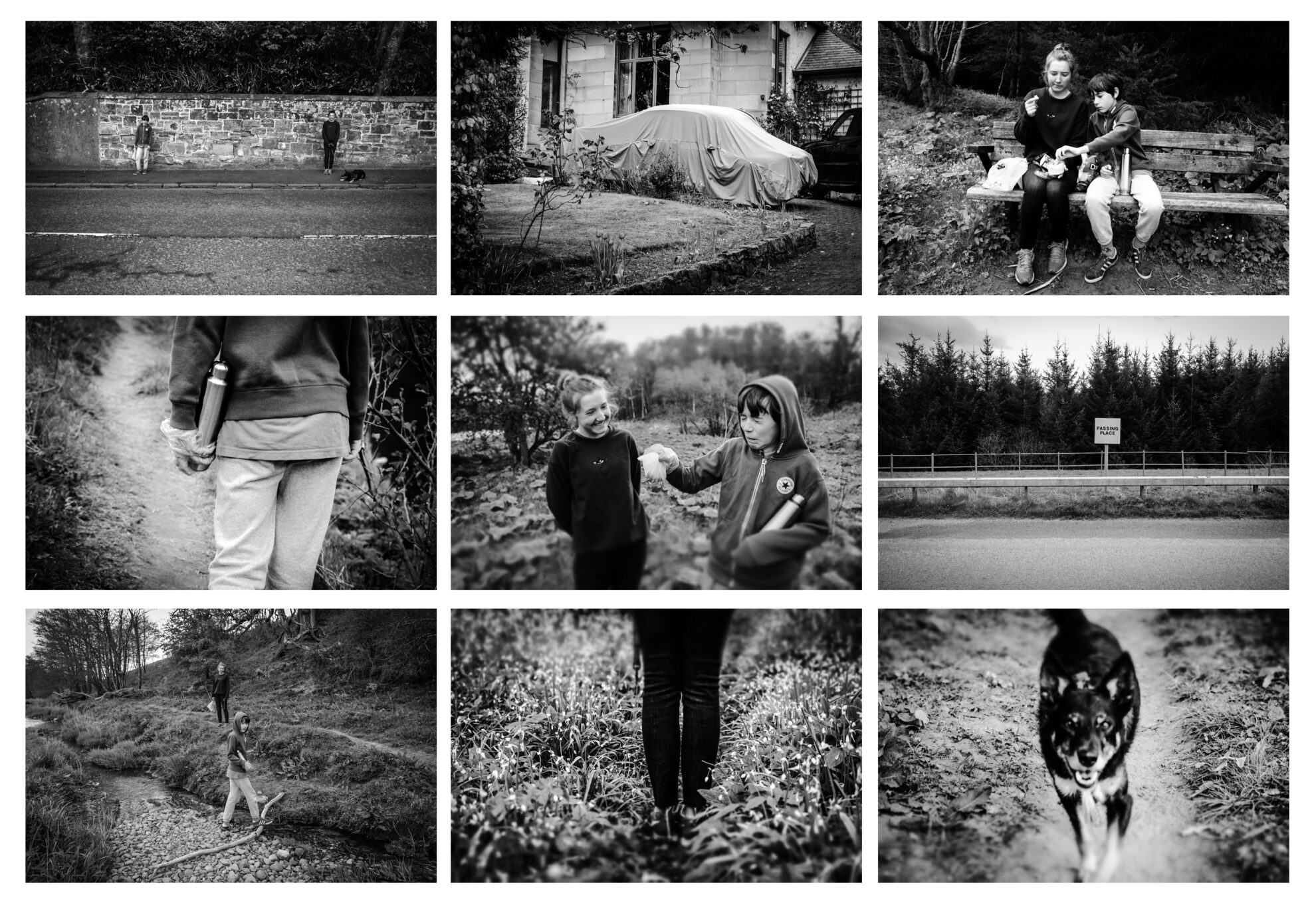 Document Scotland caught up with photographer Holger Mohaupt to talk to him about his work titled The CoronaTapes, a project made in response to the 2020 Covid-19 pandemic crisis.

Walking with Gloves – A Pandemic Diary

DS- How did the project come about?
HM – The project wasn’t planned, it emerged from conversations with people in the street during the first week of lockdown.

In the beginning of lockdown, very few people were out in the street and it was often eerily quiet and empty. Our little seaside town is never very busy anyway, so the few people that were outside seem to be up for a wee chat to see how we were all coping with the new situation. Nobody was in a rush or had to go anywhere other than back home.

I remember one morning, I asked an elderly man on the other side of the road how he was doing and he replied: ‘Surviving’. He sounded worried and that really got to me. I felt that I had to do something, something that could hold on to those moments and encounters – and not forget about how we felt when we were in it. It’s a project about empathy and the quiet voices, inside yourself and around you. The swimmer, the bin van driver, the electrician and the dog food supplier, all heroes in their own special personal way.

The ‘pandemic diary’ is also a project about photography itself and the way we read images, informed by the life that surrounds us and by the way an image is communicated on-line. It was fascinating to know that globally everyone was affected by COVID-19. We were all in some form of lockdown or quarantine at the same time. I had responses from across the world, from Japan, to Saudi Arabia, to Mexico and back to North Berwick.

An on-line project is very different from an exhibition or a book. It has immediacy, a short virtual shelf life and it’s screen-based (whatever size your screen, from iphone to 15inch laptop). That plays an important part when I curate my images for an on-line social media audience.

How are you approaching the diary?  How do you know the people in the images?
I wanted to capture the normality of the everyday, the routines of life ‘inside (your home) and outside’, out in the street. The insight had two layers – one was the physical nature of my life and that of my family of five (three children and two adults) in our house. The other was the emotional side, more raw, more experimental, I guess. ‘The outside’ was the world I met with on my daily drifts through town, on foot or on my bicycle.

My approach was to be guided by chance and instinct. My encounters with people and my daily experiences of lockdown were spontaneous but I also sometimes actively walked a different way, just to see what would happen, a bit like the French psychogeographer Guy Debord on his derives through Paris in the 60’s. He used the derive (drift) as a means to explore and see his town in a new way.
The people who appear in the diary are all people I met by chance in the street. North Berwick is a small town, so most of them I had seen before or had met in the past but didn’t necessarily know them. I made an appointment though to visit Emma, she’s a GP, often working five-to-six days-a-week (and she’s a single mother.) single-handedly looking after her two children.

Why you’re doing it and sharing it on Tumblr?
I wanted to keep a record of this special time, a record that is emotional, subjective and full of ordinary people and ordinary things.

I guess it made me think about what was ‘special’ to me in the context of a very unique situation. During lockdown North Berwick felt like a small village, everyone knew that the people you see outside walking on the closed golf course or standing in the queue at Tesco’s had to be local people, people that actually live here. This sensation created something quite special, I can’t really put my finger on it.

I wanted to capture this special moment in time. For a long time, people didn’t know for how long it would go on for. We were in total lockdown for 77 days.

I decided to stop my recordings after the first easing of the lockdown in England. The change in England led to a sudden influx of visitors from south of the border and generally more people started to come to North Berwick from the West-coast. There was definitely a change in mood and atmosphere locally. The beaches were full of litter and people getting drunk and the roads were busy and noisy again with a lot more cars. Local people started feeling a bit resentful and angry. There was a real shift from the feeling of being a small village to being a busy tourist town again. It was then that I decided to bring my pandemic diary to a close.

I was sharing my diary on two social media platforms. One was Instagram, where I posted my images every day, interspersed with little micro portraits of people. The other was Tumblr, which I used for a blog. The blog contained a slightly broader set of images. It also included screen grabs and some graphics with information on the current situation to give a fuller picture of the media landscape people were surrounded with. I also posted links to the blog on my Facebook site.

I wanted to use more than one platform to make the images more accessible. I was aware that not everyone has Instagram, especially elderly people I know and didn’t often know what Instagram even was. Website URL’s are easier to communicate, which makes tumblr a good alternative, though it is not as immediate as Instagram.

The ‘pandemic diary’ as a blog and on Instagram worked well as a means to share local images and stories. After a couple of weeks, people I bumped into on the street or on the beach, would mention the diary. They really enjoyed seeing images of their own town and the little backstories of people they all knew, but often never spoke to. The diary all of a sudden took on the form of a little/local viral newspaper.

There’s an interesting mix in the colour and the b/w portraits testimonies? What’s your thinking behind mixing the two?
The diary is very much in the tradition of street photographers, like Robert Frank, Henri Cartier-Bresson and William Eggleston. I wanted to be open to using both colour and black and white photography, selecting whatever format best represented any given moment, directed by the subject itself.

Most of the portraits are black and white and I took them with that in mind. But sometimes I couldn’t stick to my rules. Stewart, the lobster fisherman, is all in colour. I met him on a very misty morning. Everything around us was de-saturated, looking pastel and grey. The only thing that stuck out was Stewart ‘s bright yellow waterproofs and his red fishing basket. It was the same with Ian, who works for the council, collecting litter and waste. I chose to photograph both of them in colour, because I felt black and white would somehow take too much away from their appearance and subsequently, their character. For most of the other’s, it strangely worked the other way around.

I am often drawn to strong verticals and symmetry in my compositions, black and white helps to support this look. Black and white photography is also brilliant in eliminating the reds and greens that our retina is so attracted to when reading an image. – Holger Mohaupt, June 2020

Visit The CoronaTapes on Tumblr.

Holger Mohaupt is a German artist & filmmaker based in Scotland. He studied visual communication and anthropology at the Art Academy in Hamburg and completed his studies in Scotland with a postgraduate diploma in Electronic Imaging and a practice-led PhD doctorate at Duncan of Jordanstone College of Art & Design in Dundee. His distinct lens-based work has been exhibited internationally at festivals and in galleries and broadcast on TV.

In 2015 he set up the art & film collective Room 8 Studio together with the filmmaker Tracey Fearnehough. Room8 on Twitter, and on Instagram.

Holger’s research practice is focused on landscape, memory and immersive technologies. Since 2017 he is visiting lecturer in documentary film at Napier University in Edinburgh.