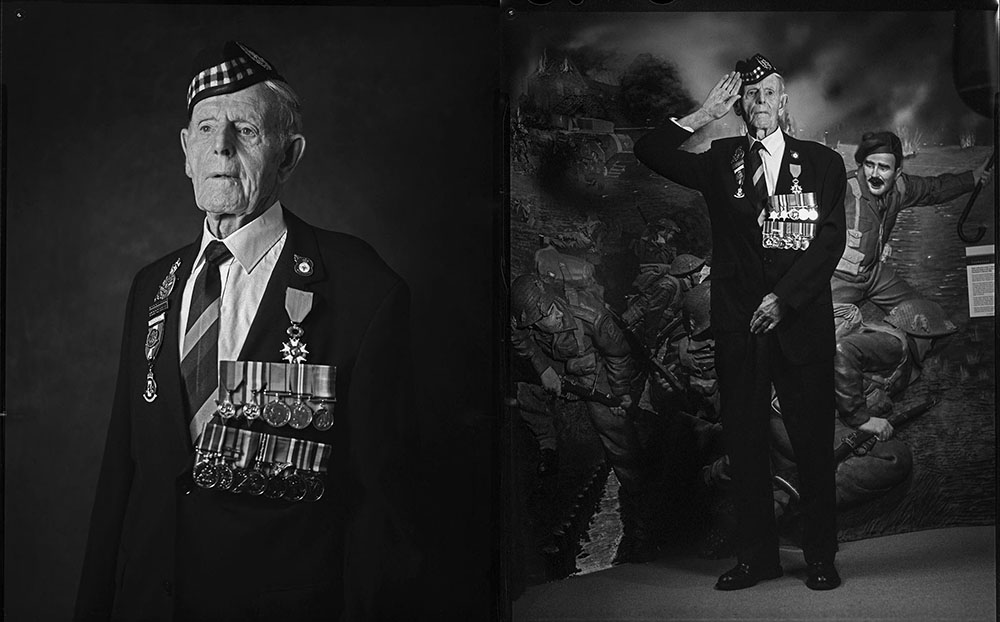 We Will Remember Them by Wattie Cheung

We’re very pleased to be able to bring you the work of Glasgow-Based photographer Wattie Cheung, who has recently been working on a series of portraits of Scottish D-Day veterans. Wattie, who was Scottish Press Photographer of the Year 2018 (amongst other awards), shares with us some of the work and the story behind the project. – Jeremy Sutton-Hibbert

DS- Where did the idea for the project come from?
WC- I’ve been covering many Remembrance Sundays and other jobs in relation to war veterans over the years in my capacity as a press photographer. WW2 has always been a fascinating subject since I was a child and over the last few years after meeting war veterans it had always been at the back of my mind to do something involving these men and women before it was too late. It wasn’t until I got the Graflex 5×4 camera and started doing portraits on it that the idea really got going. Also Jeremy Sutton-Hibbert has been badgering me for the last few years to do some kind of personal project.

What was your thinking behind your approach and style of shooting?
A lot these veterans are in their mid 90s so getting them to do star jumps or anything like that was out of the question , so I decided to make it as simple as possible and have poses that could translate to each subject no matter what their physical condition was. I like to think it makes them look dignified befitting of their service to the country.

You used an old camera, tell us about that and why? How much did you shoot?
I wanted get away from my everyday digital camera and thought that the Graflex 5×4 was an interesting subject that would interest the sitter and make it special for them . It’s also a connection to the era with the camera being made in the 1940’s.  A lot more work is involved as its a very slow way of working from getting the dark slides ready, setting up, taking the picture, processing etc. It’s unlike my day to day work flow when I can turn a job around in ten minutes.

How easy was it to track down the men? How did that happen, did you have a charity or client helping you?
I’ve used my contacts to help get other contacts to do a couple of the portraits and also Poppy Scotland came to the rescue with Fraser Bedwell really getting behind my idea and helping me with the subjects. It ended up with them commissioning me to do a series of portraits to publicise the charity which was helping men to go over to France for the 75th anniversary of D-Day.

How was it photographing the men?
The men were really pleased to be photographed and when I showed them examples they couldn’t have been more helpful. Their families were important as they would help organise the time and place to do the pictures. It seemed a very collaborative thing between myself and them. I also made sure that I didn’t just sweep in and take a pic then sweep out . I made time to sit and chat to them and hear their stories, look at the pictures from when they were younger and basically just bond with them.

They must have incredible stories, what were the highlights?
One veteran, Bill Glen, landed on D-Day +2 , made his way inland dodging fire where after a few days he was with some men and blown up by a German mortar. He says that he was lucky because he was invalided out, never having seen the enemy or firing his rifle. Many of his friends were not so lucky. A couple of them didn’t really want to talk about what they saw but rather talked about their role was in the landings. I think for many the memories are still too painful and after the war everyone just wanted to get on with their lives and that includes the families, so they just didn’t speak about it.

Why decide now to photograph them? Why do you feel it important to do so?
I had been covering the Remembrance Sunday and memorial days and saw that the WW1 veterans had disappeared before my eyes, men I had seen coming back year after year were no long in the line-ups. So with the anniversaries coming up it seemed important to start document the WW2 veterans before they disappear too and with the my getting the Graflex, the timing seemed perfect.

How will the project go forward from here? Any plans to do more portraits or to exhibit them?
I want to keep going and meet and photograph as many veterans as I can before next years VE and VJ anniversaries. I have a couple more portraits lined up including one lady who was in the WRENS. Finding them is the difficult thing, then getting them and working round my day job as a press photographer. I hope to try and get at least 30 portraits before the end of the year. What I will do with them is the next thing. Maybe an exhibition, definitely try use them in the media for next years anniversaries. I also plan to start videoing them for little 10-15 shorts, if I can figure how to do it. If anyone has anybody they feel would suitable and willing to have their portrait taken, then please get in touch.

Main double portrait, top of page:
James Glennie from Aberdeen, born 1925.
He landed on Sword beach on the 06/06/1944, was then shot, wounded and captured not long after and spent remaining days in POW camp Stallag 4b. Joined the Home Guard when he was 15 as a runner until he was old enough to get into the regulars, in his case the Gordon Highlanders, 5th/7th battalion. His unit landed on Sword Beach on the 6th June. After 3 weeks his small unit was defending a crossroads where they blew up an armoured car with a 6 pounder. Not long after that he was shot in the arm twice and taken prisoner. Lost his best friend at that moment. After been operated on by German doctors he was then removed to Stalug 4b and kept their for next 7 months. After many escapades he managed to bet back to Blighty where he was going to be sent to Japan for that invasion.
Jim was a Private in the Gordon Highlanders inheriting 51st Highland Division. After the war he became a welder on the shipyards and offshore.
Copyright © Wattie Cheung

Ian Ritchie Forsyth from Hamilton , born 23/12/1923. He landed on the beaches 16/08/1944 and was Driver Operator, reconnaissance for armoured division. He was a Sergeant in the 15th/19th The King’s Royal Hussars and became a teacher after the war.
Copyright © Wattie Cheung

Many thanks Wattie for sharing the work, and good luck with the project continuing.