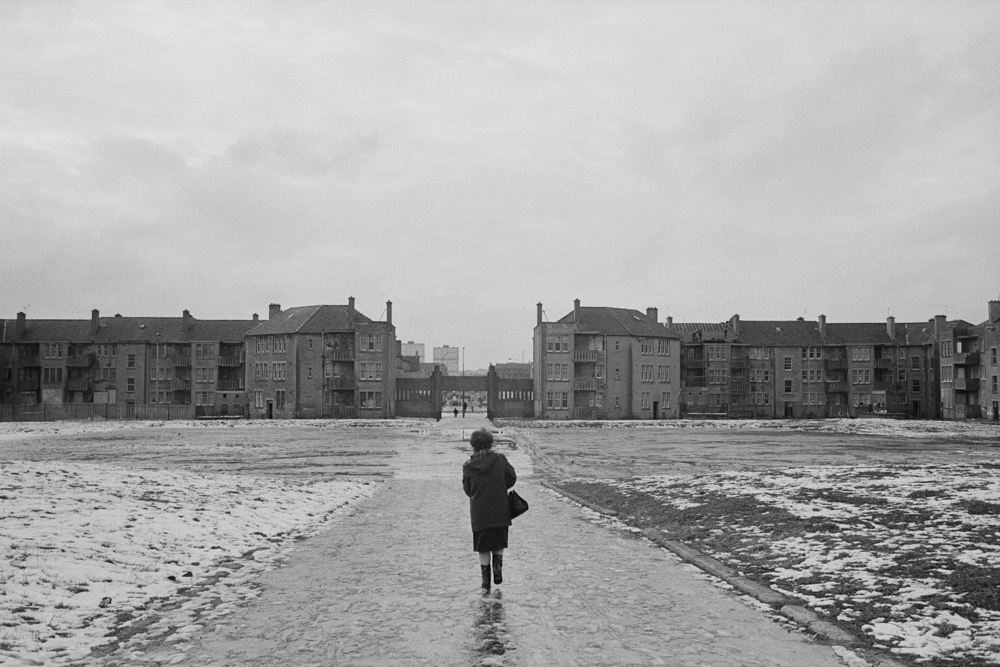 Document Scotland showcases the work of veteran photojournalist Mike Abrahams though his series of images titled Glasgow. Here he explains the background to the work:

“I grew up in Liverpool in the 50s and 60s, a city in which to my eyes colour was absent. I recall soot, smog and dereliction only in black and white. I don’t know if this has influenced my preferred medium as a photographer or whether it is simply that I find colour a distraction from the essence of what interests me; emotion, graphics and of course content. It also has enabled me to feel that I am making a photograph, something that was instilled in me by years in the darkroom resulting in an object that I could hold in my hands that was evocative of the time, place and people I had the privilege to meet.

These photographs from Glasgow, a city that felt familiar, a river at its heart, industry in decline, ill thought out housing policies, a host of social problems and a people of great spirit and life. I made three visits to the city between 1986 and 1999. Three short assignments and a chance to engage with Glasgow.”

“In 1986 during an assignment for Shelter, the housing charity I was asked to make photographs that questioned the concept of home. I worked across the UK, but my time in Glasgow centred on the Red Road Flats and Possilpark. My second visit in 1990 for the book “Glasgow, 24 Hours in the Life of a City” took me back to Possilpark and Red Road Flats. My third visit to Cranhill.

Red Road was dogged by crime and vandalism, gang fights and violence of all sorts. There were problems with asbestos, lifts too small to carry a coffin and that constantly broke down. After a fire in 1977 in which a young boy died many residents came to the end of their tether and started to move elsewhere. Some of the blocks were then offered as student accommodation, and refugees and asylum seekers started to be placed there.”

“Possilpark was one of the poorest in the city. It’s decline began when in 1967 the Saracen Foundry, which was the main employer in the area, closed down. During the 1980s Possilpark had become the hub of the city’s heroin trade. High levels of anti social behaviour and burglary made life stressful. People I met refused to leave their flats unoccupied even to go to the shops for fear that in their absence their flats would be emptied.

In 1999 I was asked to report on “Mothers Against Drugs” in Cranhill. The group formed after 13 year old Allan Harper was found dead after an overdose, his shoulder gnawed by the three bull terriers belonging to his mother’s boyfriend. It was thought he may have bought the heroin from one of the ice cream vans that supplied the estate.”

“The photographs shown here do not necessarily refer to the specifics in any of the stories I shot at the time, but give a context to these photographs. My focus has always been to document the lives of ordinary people in addition to illustrating some specifics that relate to the story. It is these documents of life at another time, that all these years later I hope will be a valuable record.”