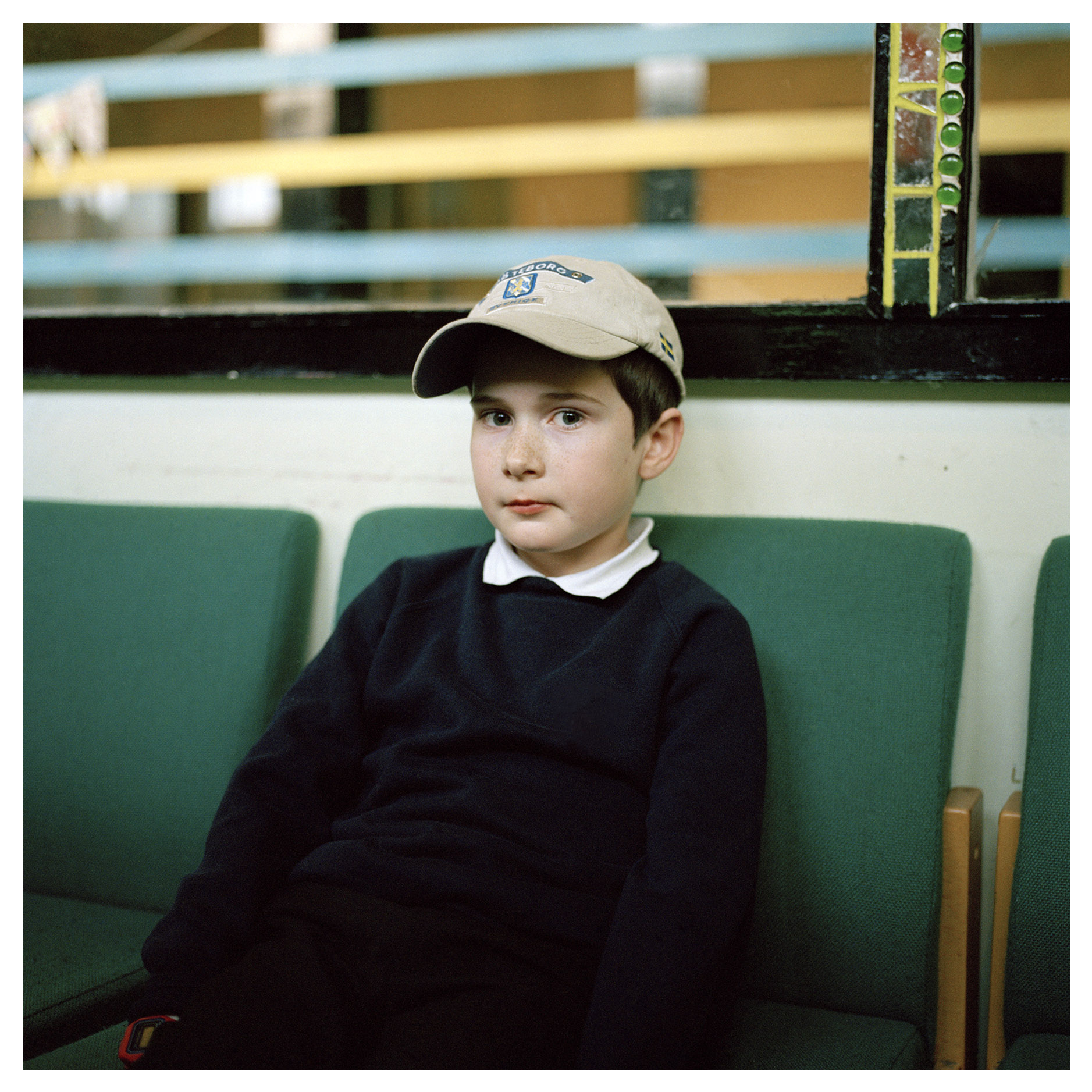 Be, still by Mairead Keating

In 2015 while studying photography at Edinburgh College of Art, Mairead Keating spent time an an Edinburgh youth club making portraits of the children she met there. The resulting body of work, “Be, Still” explores notios of childhood and growing up. Sophie spoke with Mairead about making the work and how the project came about.

“The children welcomed me into their lives and presented themselves to me in the way in ehich they wished to be seen by the world. The children revealed a sense of fragility, but also strength and knowledge. Every child is an individual; an independent person with thoughts of their own. With children there is huge potential, when making each picture I found myself wondering what each child will ne like in 10 years time. What will they grown to be, what will they look like, where will they be?”

DS: Tell us a little about how Be, Still came about – was it made while you were a student? What drew you to this place and to photograph the children in this way. Is there a story you’re trying to tell us.

MK: Yes, ‘Be, still.’ was made while I was studying my degree at Edinburgh College of Art. The project actually began in my third year and I decided to develop it further into my final year and it became the work for my degree show.

While, perhaps, it wasn’t something I spoke too much about at the time when I started the project; I think that one of the main things which drew me to making this work was rooted in what I had experienced as a child myself. We lost our Mum to Cancer at the tender age of 39. She left behind a heartbroken 42-year-old husband with 5 young kids, (4 girls and 1 boy), between the ages of 4 and 14 in rural Ireland. I was the middle child and 9 years old when Mom died, “an awkward age”, I was told time and time again.

In my adult life, I often look back and wonder how we got through it. I am still amazed at how resilient we were, and I am somewhat in awe of our younger selves and how we managed to navigate through our new life without her. I think it is both fascinating and heart-breaking the way in which children manage to adapt to their individual circumstances, grow into teenagers and adults. Childhood experiences completely shape who we are as adults and these early years are so important.

I knew that I wanted to do a community-based project with kids, and I was extremely fortunate to be welcomed into a Youth Club in Edinburgh whose aim is to provide recreational, social and educational opportunities for every child. Located in a gang-free, neutral territory, the club operates out of an area in Edinburgh that sadly, in some parts, is home to some very disadvantaged and deprived children.

Research had been conducted by Heriot Watt University, the Joseph Rowntree Foundation and the Child Poverty Action Group in 2013 found that “18% of all children in Edinburgh live in low-income households… This equates to a total of some 17,600 young people.” In general, in the UK, research found children in low-income households are less likely to do well at school than their counterparts in higher-income families. Further, a lack of skills and qualifications has been identified as a key factor in limiting an individual’s prospects of escaping from poverty through work. The Youth Club hopes to empower and enable young people to thrive and prosper in their community.

DS: The portraits are captivating – what was it about the kids which made you want to show them in portraits – the images shops their vulnerability and a sense of personality.

MK: Through my studies, I became increasingly interested in portraiture, it quickly became my preferred way of working. I was heavily influenced and inspired by a number of artists – Zoltan Jokay, Michelle Sank, Doug DuBois, James Mollison, Nelli Palomaki, Sally Mann… The list was, and still is, endless.

Shooting on Hasselblad using 120 Kodak Portra film in natural light allowed me to observe my protagonist, capturing their performance while tapping into a serious but sensitive side of my subject using a subtle colour palette. I began capturing quiet, still moments where the gaze of the child became the focus of the image, many displaying defiance in their body language and pose.

The title of the work, ‘Be, still.’ was born out of the notion of how kids are so often told to be still, but primarily as a means of telling each child that it is OK to “be…” still. To stay how they are for a while. In a world where kids are growing up so fast, it is a reminder to enjoy their childhood while they can. There isn’t any rush.

DS: Who are these children – and how did they respond to having their pictures taken – was it a collaboration, did they prepare – choose a favourite spot or was it an off the cuff situation – you took them where you found them.

MK: Not all, but some of the children who attend the youth club come from very difficult family backgrounds, which can often lead to real problems in social terms. Some of the older kids may be drifting in and out of school and falling in with the wrong crowd; getting involved in gangs and finding themselves in trouble.

This was very important to me and the basis of the work. This give and take relationship between photographer and sitter. The very language of Photography alludes to this, where I ‘take’ their portrait from them. It needed to be the way they wanted to be seen.

The kids were great, and they didn’t mind me being there. I think they enjoyed the company and most of them loved playing up to the camera, each of them wanting their turn. Some of the kids were more confident than others while others needed a little encouragement from their pals to get involved at first. There was a lot of play and silliness in these shoots behind the scenes. While the portraits captured show very still and quiet moments, behind the camera there was chaos!

DS: There’s feels like a narrative behind the images – was that your intention. Nothing is given away in the context of your website – so a lot of this is left to the viewer – how do you want your audience to respond to these images?

MK: Childhood is recognised as a social construct which is ever-changing, but it is important to understand why. What is childhood and what should it be like? What are the reasons for these changing constructions, in particular in contemporary society? Photography can be used as an instrument to answer all of these questions. I believe that while certain problems do exist in relation to the portrayal of children in photography, it would be foolish not to embrace the projects which strive to give kids all over the world a voice and help us learn to understand and empathise with them the in the way that we, as adults should. On the whole, it will help us to understand the world as we know it, a little better, and help us to create a better future for our children.

The message of the superb work, which is being done in, not only this Youth Club, but Clubs and Outreach Programs all over the UK and Ireland is also central to the work. In an area where territorial-ism is an important issue, this Club aims to encourage the children to integrate within a safe environment where they make new friends, learn new skills and look towards the future. This is especially important with the younger children and the staff hope that they and the club can be a positive influence that encourages each child to reach their full potential.

The Youth Club hopes to empower and enable young people to thrive and prosper in their community. Young people can be a catalyst for reversing social and economic decline in a community. Early and ongoing engagement with young people is critical. Too often, support comes late in a young person’s life – dealing with the symptoms rather than the causes of social problems. In an inclusive approach that engages with the community’s most troubled and isolated young people, the Club is open to all and does not shy away from dealing with some of the most challenging young people whose issues and behaviour often leave them excluded from school and society.

DS: After this project you were commissioned to be artist in residence at Mary Erskine School for girls, – how did that project go? How were the results? Can we see them?

MK: Yes, I became the Artist in Residence at ESMS: The Mary Erskine School in Edinburgh for the 2016/16 school year. It was a very different experience but one which I enjoyed thoroughly.

Here, I worked with the girls after school teaching them how to use the school’s darkroom which had not been used in a number of years. The most enjoyable part of my time there was seeing the images that the students came back with after shooting their surroundings in the previous week. We developed the film by hand and printed their photographs in the darkroom.

In terms of making my own work, the constructs of the setting sometimes resulted in a stiffness in my subjects, and it sometimes felt difficult to find sitters who were comfortable to take part. I began shooting empty interiors during my time at ESMS which was not something I had delved into in the past and left me pleasantly surprised.

I think it can be quite difficult for students coming straight out of University and into residencies. It is important to be sure that both parties are benefitting from the process and that both have an understanding of what each hopes to take from the experience.

DS: What are you working on now?

MK: I really struggled after leaving University having been separated from my colleagues and like-minded classmates. You take for granted the constant support, the critique, the engaged conversation… Just being immersed in the art world. I didn’t have that with my family and circle of friends. The regular 9-5 which pays the bills took hold and before I know it months on end have passed me by and I haven’t made any work. I found very hard to get out of that rut.

I bought a cheap camera and shot some work in a more informal manner, started reading and looking at work that inspires me again and slowly I have begun to sink back into a world I became estranged from.

I am now in the early stages of working on a project exploring the theme of sleep. I have personally struggled with sleep and have experienced night terrors from a young age, so it is a topic which has always interested me. In a world where it, today, worryingly seems like it is almost like wearing a badge of honour to boast to our colleagues on how we survive on just a couple of hours sleep a night, I think it Is an important topic to discuss and explore.