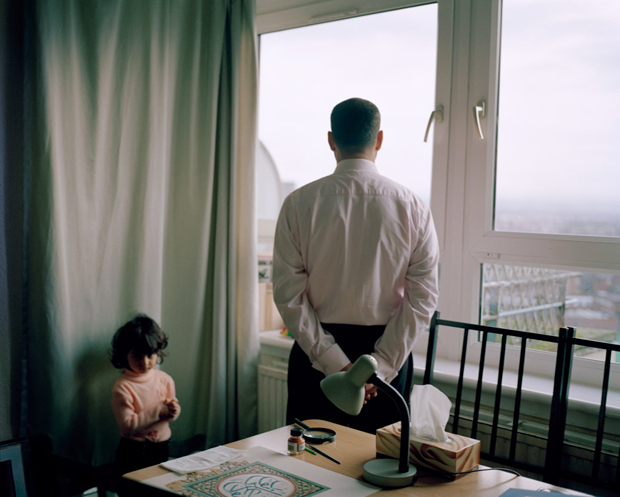 Document Scotland is pleased to be able to show Sarah Amy Fishlock’s ‘Middlemen’ series, a portraiture project which documents the plight of three Iraqi interpreters who have fled Iraq and now live in Glasgow, a portrait of those who live here but who sometimes seem invisible and ignored, and for whom a new life far from their own communities is a choice of desperation.

Over on the Document Scotland blog we’ve posted a small interview with Sarah Amy Fishlock in which she discusses her Middlemen project and shows us some of the book that she self-published.

“In 2007, under increasing public pressure , the British government pledged assistance to its locally engaged staff in Iraq. These ordinary people, working as interpreters, drivers, and other administrative staff, were viewed as ‘collaborators’ by the fundamentalist militia who had obtained a political and psychological hold over the disorientated population of post-invasion Iraq. The Iraqis who had worked with the coalition forces since the 2003 invasion were subjected to brutal reprisals : threats, kidnapping, torture and murder. Their situation went largely ignored by the British press until a series of articles by Times journalist Deborah Haynes revealed the truth.

Under the Locally Engaged Staff Assistance Scheme, applicants could either resettle in the UK or apply for financial aid to help them move to more stable regions of the Middle East. The scheme was active for just over 3 years before the British government began to wind it down, parallel to the withdrawal of its military presence in Iraq. As of 12 noon Standard Arabian Time on 16th January 2011, no further applications were accepted.

I worked closely with three former Iraqi staff who successfully applied for the LESAS, collaborating with them and with the Scottish Middle Eastern Council (SMEC) to produce a photographic portrait of their new lives in Glasgow. These families face an uncertain future as they try to adapt to a culture very different from their own. They have left their friends, family and history behind them, in a volatile country to which they may never be able to return.”

“I spoke to the manager of the Labour Support Unit. I said, ‘I want to resign. I want to go, so would you help me?’

He refused. He said ‘British policy is different. They are not accepting anybody.’

We worked for them. We asked for help and were refused. We kept asking and asking.

“The militias are connected to the government.

They have a very powerful authority to arrest anybody who deals with the British army.

So we lost many friends at that time.

Some of them were murdered.

Some of them were cut in pieces and thrown in front of their houses.”

“You go into the office one morning, thinking ‘It’s a new day: I’m going to do something useful.’

Suddenly somebody says to you ‘You remember this guy?’

They say ‘He was kidnapped and they found him dead this morning.’

You feel the tension for the rest of the day, the whole week, the month.

We left for a very simple reason: we did not want our daughter to go through what we went through.

We want her to have a normal life.

We want her to have a choice.

We want to do everything right from the beginning.”

“Nobody mentions the interpreters who lost their lives for Iraq.

Their lives are deniable.

Nobody looked after them.

Their case is forgettable.”

“When they attacked my home I decided, without hesitation, to leave Iraq. Because those people were talking seriously: they really would do what they said.

I didn’t want to face death like the other interpreters.

Two of them were my close friends.

When I remember them I feel very sad.”

All images and text/captions are © Sarah Amy Fishlock 2012.