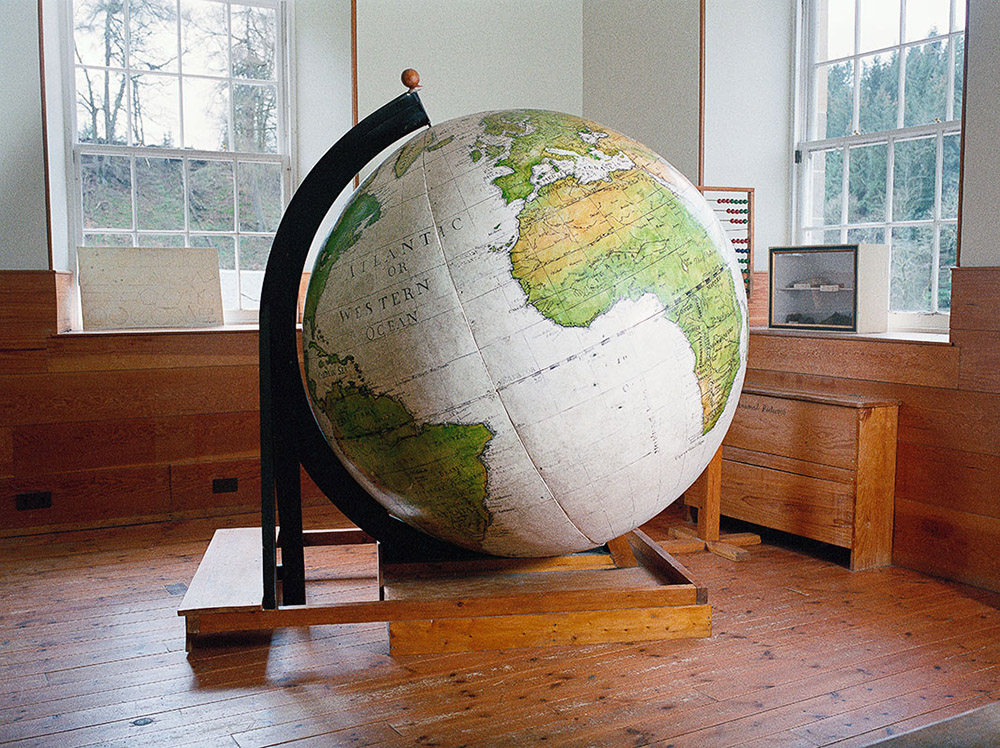 The village of New Lanark, nestled in the sprawling Clyde Valley on the Falls of the Clyde became world renown in the 19th century as one of the earliest examples of a socialist utopian community. Built as a cotton mill by the industrialist David Dale in 1846, here workers conditions were revolutionised with the implementation of hospitable housing conditions, social welfare for mill workers and education for all children resident in the village under the guidance of Dale’s son-in-law, philanthropist and social reformer Robert Owen. Saved from near destruction after falling into decline in the mid-20th century, today the village thrives as a popular tourist attraction, having been designated a world heritage site in 2001 for the continued relevance of Owen’s ideals and as an exemplarily model of urban planning. Alongside New Lanark’s role as a tourist destination, some 250 people continue to live in the village for whom this beacon of utopian philosophy is simply called home. The New Lanark Trust has recently secured funding to renovate the last remaining unrestored tenement block as a museum, completing New Lanark’s rebirth as a perfectly preserved model society.

Uncanny Valley explores the dichotomy which exists between New Lanark’s past and present, contrasting it’s dual role for visitors as an almost perfectly preserved model society with the current residents whose very homes, kitchens and living rooms are world heritage sites, symbols of a bygone yet persistent utopian ideal. As the last remaining unrestored tenement block in the village awaits restoration as a museum, my intent was to create a document of the last remaining untouched traces of New Lanark’s utopian past before it is frozen in time for future generations as a reconstruction. For Sigmund Freud, the uncanny effect was most noticeable in the compulsion to repeat, for instance when becoming lost and repeatedly (yet seemingly accidentally) returning to the same point. Retracing ones steps, the viewer may discover they have travelled from the past to pastiche, no longer in ruins but perfected to an uncanny degree. In the valley which lies between past and present, the ruins of utopia stand side by side with it’s uncanny reconstruction, signifying the cognitive dissonance which exists between the cherished utopian dreams of the past and the reality of modern society. – Alan Knox

DS – Thank you for sharing your work Alan, it’s great to see. What drew you to New Lanark in the first place? What was the attraction?

AK – Growing up in Lanarkshire, I always remember being aware of New Lanark and it’s history as one of the world’s earliest examples of a utopian socialist community. Under Robert Owen’s leadership in the 19th century, labour conditions were revolutionised with social welfare provision and free education for workers and their families, royalty came from across Europe to marvel at how such a society was achievable. I was fascinated that such a small place could become the cradle for such revolutionary ideals: a beacon of social equality for visitors from around the world yet most importantly, a home for some 250 people to this very day. New Lanark has become famous as a place where people come to gaze but in this project, my attempt was to show the village from the gaze of the residents: what is it like to live in a world heritage site? Were Robert Owen’s ideals still in evidence? Is utopia an achievable ideal or a work in progress? As I progressed, I felt very honoured to be treated as a guest in resident’s homes as they told me their perspectives on life in the village.

I was also interested to learn that Double Row, the last remaining unrestored tenement block closed to visitors is about to undergo renovation as a preserved museum, having stood derelict for 40 years. I wanted to create a record of these interior spaces as untouched evidence of life in bygone New Lanark before their renovation for visitors. By juxtaposing these images of dereliction with portraits of the residents who currently reside in the village, I hoped to convey how far the village had travelled from near total ruin to a flourishing home for over 200 people. By also contrasting them with images of New Lanark’s re-enactment of life in the time of Robert Owen, I hoped to convey a landscape poised between the past and it’s uncanny reconstruction.

DS – What are the feelings of the people that live there to living in this museum-like Utopia? And to being in your project, did they buy into the project and idea?

AK – All residents I photographed took a great deal of pride in the village and were eager to convey a view of New Lanark which tourists do not normally get to see. Though they all saw value in the village’s role as a world heritage site, the recurring theme I found speaking to residents was the importance of balancing their experience of the village as first and foremost their home with it’s role as an icon of Robert Owen’s utopian socialism and a busy tourist attraction. One resident told me stories of tourists accidentally wandering into their home and others of visitors tapping on their living room window, mistaking it for a restored mill-workers house. Generally though this was all taken in stride, some have lived in the village since restoration work first began over 30 years ago and had watched as the village was reborn from near ruin to a flourishing attraction. Others had family ties to the village stretching back generations. Speaking to James Arnold, the first director of the New Lanark Trust and former director of the Utopian Studies Society, he stressed that a utopia should never be viewed as an ideal of perfection but always as a work in progress. This term certainly seemed to apply to New Lanark.

DS – Are you continuing with Uncanny Valley, how far to completion are you, and what are the aims for the project?

AK –North of the village lies the sprawling Hyndofrd Quarry where I’m hoping to shoot this autumn. Many of the residents I spoke to were very active in campaigning against it’s encroachment upon the village, forming the Save our Landscapes group which recently scored a major victory when the quarry owner’s bid to extend excavation into the protected buffer zone surrounding New Lanark was rejected by the Scottish Government. Ultimately I hope to document how the village sits within this wider industrial landscape and produce a book of the series to coincide with the renovation of Double Row.

DS – How was it gaining access to New Lanark, and how much time are you spending there?

AK – The New Lanark Trust was very welcoming in allowing me to photograph inside both the visitor attractions and Double Row and I’m hoping to be able to return to there in the future to photograph it’s restoration. Chance meetings with former residents such as David Dunlop meant he was able to give me a personal tour of Double Row where he was born and raised. The picture he drew of growing up in New Lanark was one where family and a sense of community were central to the village and as the last surviving resident to have been born there, I was eager to photograph David in his former home before it is fully restored.

DS – What do the inhabitants think of the work, have they seen it? Will the work be exhibited there at all?

AK –I’ve since been able to show some of the inhabitants prints of their portraits and the response has been kind. I’m also hopeful of exhibiting some of the interior images of Double Row in the New Lanark search room in time for the Doors Open weekend on September 12th-13th.

DS – You’ve just graduated from the Glasgow School of Art, how was the course there? What other bodies of work have you been recently working on?

AK – Studying Communication Design at Glasgow School of Art allowed me to specialise in both digital and analogue photography whilst encouraging me to explore new skills such as book design. During my final year I worked on a series of projects which first began several years ago when I started documenting the process of scattering my grandfather’s ashes. Over time, it seemed a more sensitive way to document this process would be to convey only the trace of the ash. The most natural way of doing this appeared to be the photogram which involved scattering my grandfather’s remains directly onto a roll of large scale photographic paper and exposing them to light in the darkroom. Once exposed, the shadows cast by my Grandfather’s remains appear as stars against an inky black sky, reconnecting the remains of the dead with the origin of all life. Through this, I hoped to question the relationship between photography, death and the sublime, as the astronomer Carl Sagan famously said, “We are made of starstuff.”

Images shown during my degree show are currently on display at Peacock Visual Arts in Aberdeen as part of the Futureproof 2015 showcase of photography graduates from across Scotland. There is also a plan to exhibit my Man in the Moon project in the future which I’m very excited about.

DS – We saw the work of Made of Stars project, on Creative Review site, which was fascinating also. Are there plans to exhibit that project or make it into a book?

AK –I recently made a photobook dummy from the project which I’m hoping to self publish in the future. Prints from the project were recently displayed at the Daniel Blau Gallery in London as part of their 5 Under 30 exhibtiion where afterwards several people told me they had recently experienced a family bereavement and had found a healing quality in the images. I was very humbled that others were able to find meaning in a project which had originally been so personal to me.

DS – What next for yourself and your work? You’ve certainly been noticed with a lot of your recent work, both the projects mentioned above and also your borders project The Debatable Land which I believe was shown at Carlisle Photo Festival in a waiting room, at the same tie as Document Scotland exhibited on a bridge across the train tracks. A great venue for photo shows we felt. Did you enjoy showing work there?

AK – I was really honoured to be invited to exhibit work from two of my borders projects, The Debatable Land and Schengland at Carlisle Photo Festival alongside Document Scotland and other photographers and it was great to see the images displayed in such a busy setting. Photographing the border during such a momentous year for Scotland was an experience I’ll never forget, in many ways the issues raised during the debate seem to have only grown since the referendum result and I’m hoping to return to the Border region soon to continue the project alongside Uncanny Valley.

Thank you Alan, and all the best for your work.