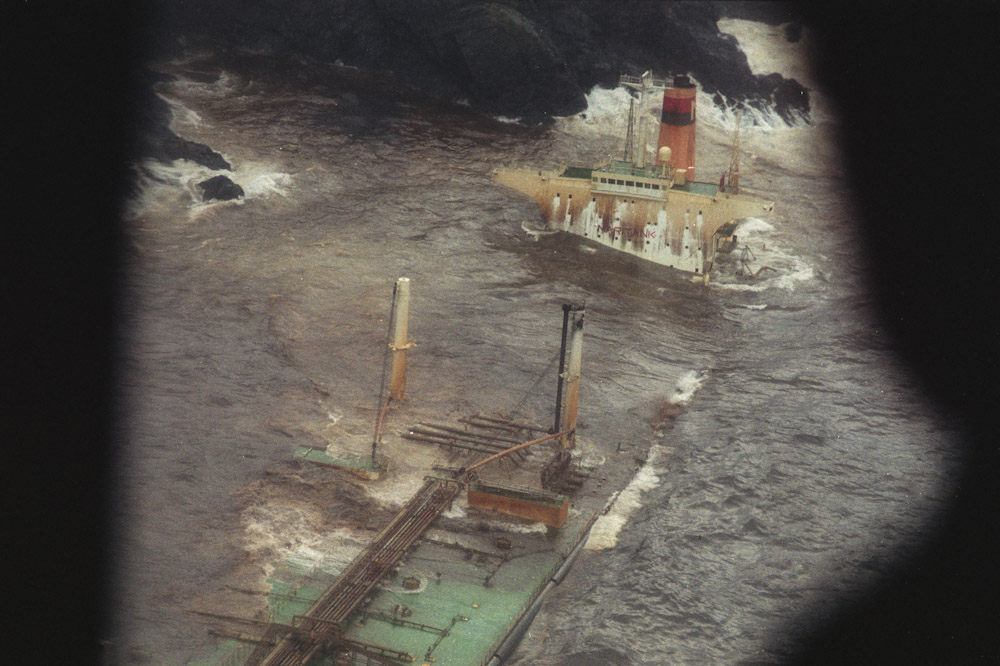 Twenty years ago this weekend, on 5th January 1993, the Lerwick coastguard were advised that the Liberian-registered oil tanker, the MV Braer, carrying 85,000 tonnes of crude oil, was drifting without power in a storm 10 miles off of Sumburgh Head, in the Shetland Isles. The vessel eventually settled on rocks, leaking her cargo of Gulfaks crude oil, an oil which is lighter and more easily biodegradeable than North Sea crude. Nature spared the Shetland the worst of the spill, with the severe storms raging, breaking up the oil and averting  the worst case scenario of the spill.

To read more about the Braer disaster see here, and here.

“I was sent immediately on assignment by the Scotland On Sunday, by picture editor Kayt Turner and editor Andrew Jaspan. I flew there in a light aircraft with Ian Lang, then Secretary of State for Scotland. My brief was to get a shot of Ian Lang observing the stricken vessel from the aircraft and get a picture back for the next front page of the paper. I forget if I got the front of the paper, but I ended up staying in the Shetland for almost 2 weeks. Along with fellow Scotland on Sunday photographer Adam Elder, and journalists Euan Ferguson and Willie Paul, we covered the disaster to produce a comprehensive view of it for a following magazine issue for the paper. Due to the numbers of media who descended on the island, and a lack of rooms available, we all shared one hotel bedroom, 2 in the bed, 2 on the floor. Shetland in winter, each day the light came up about 10.30am, and it got dark again at 2’ish, time available for photographing was short. And the weather was bad.

Standing on Sumburgh Head, trying to look down on the Braer was a fight against the storm. Inch your way past the police in gas masks due to the oil spray, inch to the cliff face, the wind buffeting you hard, crouch or stand, shoot a frame or two of photographs, then crouch, turn and wipe the oil spray from your camera lens. Such were those days”- Jeremy Sutton-Hibbert

The work above is by Jeremy Sutton-Hibbert, Tom Kidd and Richard Baker. Click their names to see their respective websites.