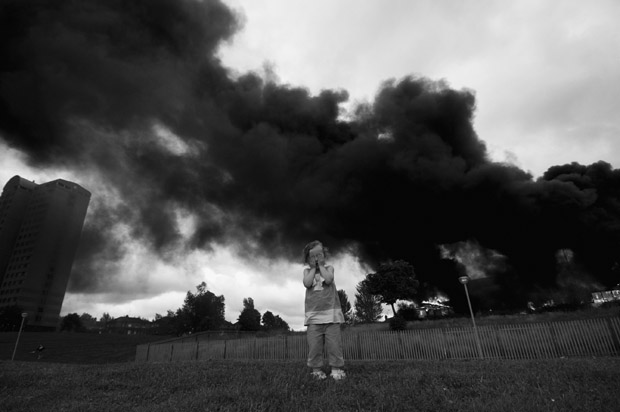 Glasgow-born press photographer Brian Anderson has for many years work on his self-initiated and self-funded project ‘FACES, A Photographic Journey Through The Underworld’. The result of this work is a two volume book which depicts the British criminal underworld, portraying the leading figures or ‘Faces’, and documenting the lifestyle of the participants, the gangland killings and feuds.

Brian kindly shares below some of the images and spreads from the book with Document Scotland, and answered some questions about his project.

Document Scotland- Brian, thanks for showing us the work from your FACES project. Can you let us know how the project came about, and what was your motivation for doing it?

BA-  The motivation behind the Faces project was purely the fact that this type of criminal portrayal had been attempted in the past but not done accurately (example growling idiots or doorman types).

DS- And what was your aim of the project ?

BA- To produce a historical body of work of the most infamous British Criminals over the last 50 years, to be used as a search tool for future criminologists, historians and true crime enthusiasts.

DS- How long did it take to work on, and I’m sure a lot of the project was merely the logistics of trying to get access to these men and families, how much time did you spend doing logistics as opposed to the photographing days?

BA-  Ten years in total, and in all the big cities of the UK – Glasgow, Manchester, Liverpool , Newcastle, Birmingham, Sunderland, London, Essex, Dublin, and in Spain. Driving for hours then maybe I got 10 minutess for a picture most times.

DS- I can imagine finding grants, bursaries, or clients to finance the work on a project like this wouldn’t be easy, so if you don’t mind, how did you finance it?

BA-   Self funded, any extra income from my day job as press photographer at News of the World would finance it .

DS- How hard was it breaking through into that world and getting the access? How did you go about it? How did you get these crime families, and figures from the crime world, to agree to be photographed?

BA- Very hard indeed they just don’t take to anyone,  build up of trust really, once they new my intention it was fine though.

DS- How were people chosen in terms of deciding who to photograph?

BA- That was the easy bit, it was the big time infamous gangsters who made all the newspaper headlines in their respective cities.

DS- Why do you think these men agreed to be part of the project? What was in it for them, I’d have thought that they wouldn’t want photographed, or to be identified?

BA- Think they agreed to photographed mainly for the historical social document of the project. Anyone could buy or take pictures during a court case for example without their consent. Also think nobody every asked them before, they liked that.

DS- How did that play out in the types of photos you were able to get, could you direct the scenes, control the portrait situations, or were they more controlling? What were the dynamics involved when you turn up to photograph the main men? Did they give you a lot of time, or seconds?

BA- Sometimes it was seconds, one major Manchester gangster pulled up in his Jag, his minders got out and searched me, I was put in the back of the car for 2 snaps then kicked out,  so he would not be left out such a historical book.  The gangsters in the book picked locations on the day, I just got the call to say turn up.

DS- Were you always happy about how they were portrayed, or portraying themselves? Could you chose the locations for the shoots? How would it work?

BA- Most times I was happy at the  location I wanted them to choose, anyway to be honest they know their own city and left it to them, but looking back there’s a few I would have changed if I could.

DS- Has there been any criticism at all of how they are portrayed, or of the project in general? I’m sure some people will think these men should not be given the oxygen of publicity or that in a sense making a big high production value book gives them some sort of validation.

BA-  Your always going to get people to knock anything you do I suppose, it’s human nature  people with criticize mostly lazy journos looking for a cheap and easy dig. In no way does this book glamourise crime,  it documents death, and a old man sits in wheelchair broken and dejected and alone, it’s hardly glamour.

DS- And what about from the men themselves, were there any feedback, compliments or criticism about how they have been shown? In terms of editing the images did the fear of repercussions from the crime families ever make you chose certain images over an other?

BA-  Most are very happy of the potrayal of FACES because it’s real, a true piece of British and Scottish social history really.

DS- Did any of them ask for image approval before you were allowed to publish them?

BA- One guy ask me to delete the picture because he looked fat so I did , then took it again, he liked it .

DS- How do you see the project as having worked? Was it successful, and what do you think it means to have all these figures photographed and their lives illustrated?

DS- I can only imagine that the project must have had moments of danger, or tension for you? Any you can share with us?

BA- Had a gun pulled on me, a loaded Magnum actually and put to my head by a Glasgow gangster high on coke. Liverpool gangsters pulled out lines of coke in a packed restaurant and asked if I was wearing a wire before threating to kill the chef as their steak was undercooked. I was chased from a funeral, involved in a car crash with a feared London gangster, and another London gangster put a hit on me (which was cancelled after he got a call from another criminal telling him I was ok). Got various death threats from a family who didn’t one in it after I sent them a nice polite letter. To answer you question loads of time.

DS- And if you’re around every crime family in the UK, surely at some point there were moments when the police, or authorities, began to take an interest in you? Or have they since now that the book is out and the images are public?

BA-  Sure I’ve been noticed  many times but just doing my job.

DS- Are you glad it is finished? Can you breathe out now? What is next for the project, has it been exhibited?

DS- Where is the book available from ? Is there a website people can see the work and images ?

BA- TRUECRIMEPUBLISHING.COM , and will be doing a website soon and selling limited edition photos from FACES.

DS- What is next for you, do you have a new project started or in mind ?

DS- Many thanks Brian for sharing the work, take care out there in the streets. It’s a jungle out there.