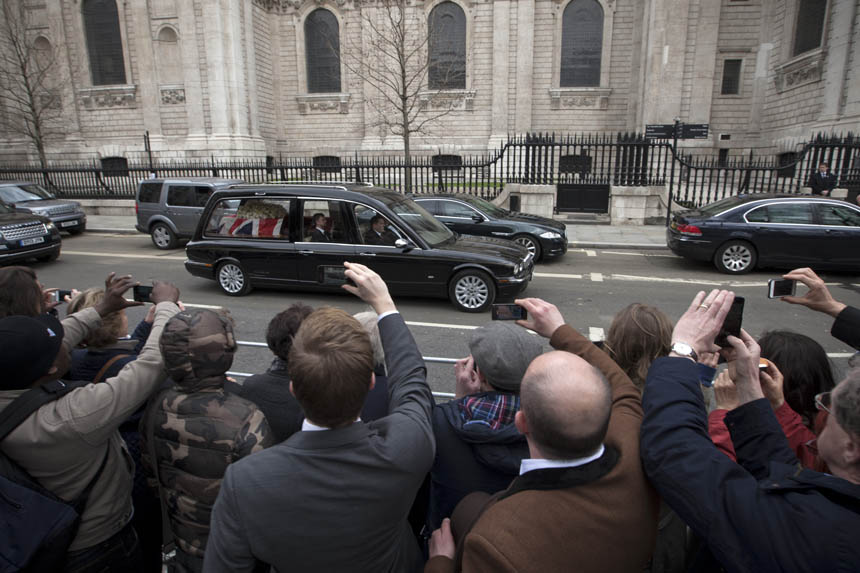 Margaret Thatcher‘s passing in April 2013 brought to an end the life of one of the most controversial and influential post-War British politicians. The Conservative leader, who had served as Prime Minister from 1979 until being deposed by her own party in 1990, divided opinion. What cannot be doubted, is that she changed society and created a legacy that is still the source of much debate across the nations of the United Kingdom.

Thatcher was granted a State funeral, with full military honours in London. At the same time in Glasgow, people there gathered on the streets to give her their own send-off. Document Scotland photographers Jeremy Sutton-Hibbert and Colin McPherson covered the two simultaneous events at the opposite ends of the country and political spectrum.

“The day began with a drive down to Ayrshire, and listening on the car radio to the procession through the streets of London of the funeral cortege of Margaret Thatcher. It sounded solemn and respectful in London, but around me were the wet fields of Ayrshire, and the once mining communities that reside amongst them. I turned off the radio just as the funeral service began in St. Paul’s, and just as I arrived at the pub in which a ‘Thatcher is Gone’ party was about to begin.

Union Jack bunting hung inside and out, and the landlord, Jim McMahon, was wearing a black tie. Any confusion as to whether it was an anti-Thatcher or pro-Thatcher party was soon cleared up as champagne was sprayed and drank, and beers consumed, and ex-miner McMahon asked for a minutes silence, not for Thatcher, but for the jobs they had lost in the coal mines, for the people who had fought Thatcher on the picket lines and died, and for all the victims of her policies. It was the first of a few speeches, and heckles, and which ended with raucous applause and cheers for a vitriolic and passionate speech by Socialist politician Tommy Sheridan.

Back in Glasgow a little later and Tommy Sheridan started his speech there with his same first lines and black humour jokes, but I was distracted by those in attendance in the smaller than expected crowd, from the woman with the miss-spelled banner, the Republicans with their flags and banners depicting IRA hunger strikers, and Wonder Woman doing karate kicks whenever she saw a camera. It was all far removed from the ceremony on the radio, or that I could read about on Twitter, but no less real, no less passionate or historical.”  – Jeremy Sutton-Hibbert

“London does pomp and pageantry well. It does poignant and ceremonial well too. When it comes to births, deaths and marriages – not to mention the odd jubilee or Olympic Games, this particular metropolis scrubs up well and gets out all its finery.

I love working at big state occasions or ceremonies in London. It’s not only the backdrop but the whole organisation which impresses. Nothing left to chance, everything spotless and perfect.

And so it was at the funeral of Baroness Thatcher of Kesteven. On a suitably funereal, grey morning, with rain spattering our lenses, we watched and witnessed the final journey of a woman who, 23 years after leaving office, still ignites flames and inflames passions.

And as always, the streets were clogged with onlookers, wielding cameras by the thousand, all collecting little souvenirs of the Iron Lady’s last journey.

There was applause, there were boos, but most of all there was London: magnificent and majestic, putting the event into perspective and committing it to memory and history.” – Colin McPherson.