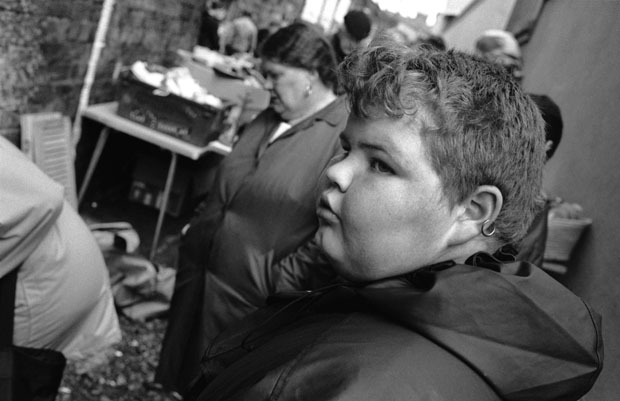 “Paddy’s Market, “the type of place you go to buy one shoe lace” was how I first heard it described.

Paddy’s Market’s reputation was a long one with a 200 year old history, and not always one portrayed in a good light. Rumours had circulated for years that it would close, the Glasgow city centre would be cleaned up, the stalls under the railway arches would be closed, a part of Glaswegian history would be lost for good. As these rumours got ever louder I decided I needed my own set of images from the market before it did indeed disappear (and it did indeed close years later).

I ventured forth one weekday, for the market didn’t operate on weekends, and tried as best I could to mingle with the crowds and to shoot the images without drawing attention to myself. The stall holders had no problem, they were proud of their heritage, but some shoppers preferred not to be seen to be shopping there. I had been warned before I went that the trouble would not come from the stall holders or the shoppers, but from the people selling illegally cigarettes and alcohol from the back of a van, or from the drug addicts who hung around one end of the lane, buying their drugs, consuming their heroin.

But I encountered no trouble, maybe a few stares, maybe a few people turned away, but I shot for the day, a few rolls of black and white. A few frames to record that Paddy’s Market had existed.”