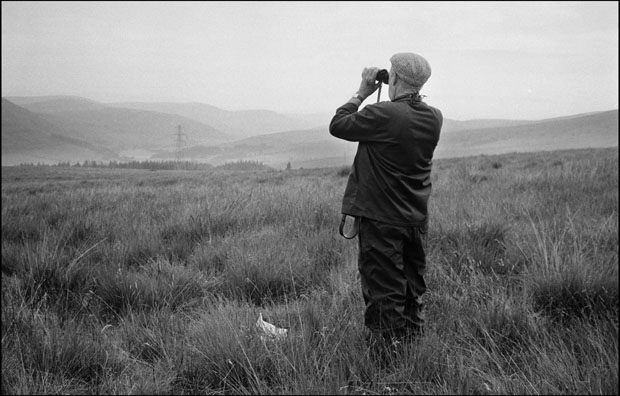 “I was on a self initiated shoot, down in the Scottish borders, shooting in black and white on my Leica cameras, a story which I had already placed with a magazine, when I got wind of another little story. Hound dogs. “So what’s that then, how does that work ?” I enquired.

A week or two later, and I’ve sold the idea, and I’m down in the Borders region again, out in the fields, two Leicas and a pocketful of HP5 film. For those were the days (and for those that care it was either two M6s, or an M6 and an M4-P).

Anyway, hound dog day indeed. Lots of them, lots of yelping hounds. We’re off on a hill, early morning. Earlier that day a rag, soaked in aniseed, oil and turpentine, has been pulled over the hills on a large looping trail. The dogs when released will follow that trail, sniffing all around the fields, over bushes and dry stone dyke walls, following the scent all the way back to the start line. The owners will watch with binoculars as the dogs disappear, straining to see them in the distance, and then shouting when they reappear. First dog back wins. Whilst the hounds are away money changes hands with the bookies, and when the hounds come back, running straight to their handler who blows whistles, flutters flags, urges them on with bowls of their special treat food, more money changes hands.

I’m not sure now how many races there were, not so many. A morning’s worth. It was a fun little shoot, over and done in a couple of hours, bar one picture of the top dog receiving it’s trophy later in the afternoon. Great fun.”