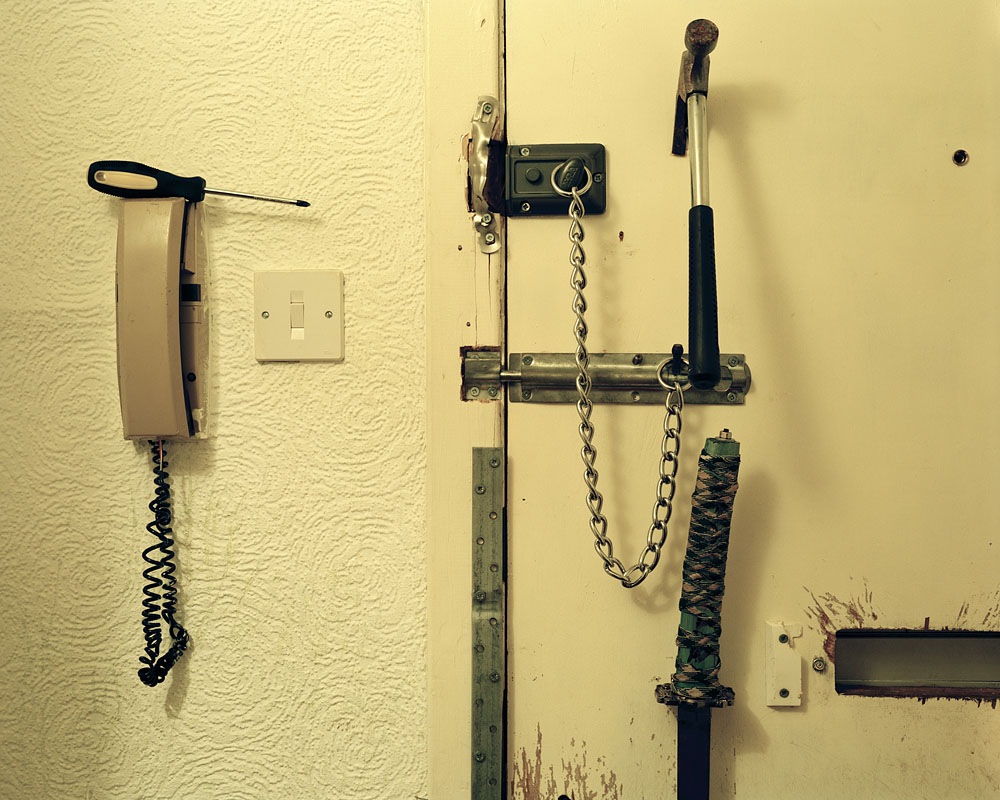 Japanese-American photographer, Yoshi Kametani proves the dictum that it often takes an outsider to show a country – or a part of it – as it really is.

Yoshi, who is only just embarking on his photographic career, has made a brutally honest depiction of a group of young people living, playing, and sometimes misbehaving in the Muirhouse area of Edinburgh. Muirhouse is one of those neighbourhoods where young people often get forgotten and whose lives often never take flight. When scheme-life can seen un-escapable.

The resulting project, called Plastic Spoon, shot over the last five years, is a clear-eyed and fearless report from the fringes of Scottish society. Yoshi uses a variety of camera formats and even mixes colour and black and white in the project, but every image feels intimate and part of a multi-layered exploration of the world he and his subjects inhabit. Last year he won several awards for the project and is hoping to bring out a photobook sometime in 2014.

Document Scotland were intrigued at the level of access Yoshi managed to get into the everyday lives of his subjects and we wondered what his motivations were for choosing Muirhouse as the first major project of his career.

Yoshi: My experience with Muirhouse started in quite an organic way, I suppose. The first step I took for this specific project was to just walk around the streets and photograph what interested me. This act was part of my research process. Initially I hung out with the kids on the streets and photographed their lives. Eventually I would meet random people on the streets who were a bit older and they would ask me what I’m doing there or if I am lost. If you can imagine a stereotypical East Asian guy with cameras around his neck walking around a Scottish council scheme, you can see how one would assume that I got lost and ended up in the wrong side of town. I stuck out like a sore thumb and my American accent seemed to intrigued people even more. The people I crossed paths with were just as interested in me as I was in them.

Every one was nice and a few people invite me into their homes to get warm and have a chat over a cup of tea. This is how most of my friendships began, on the street chatting about where I’m from and what I’m doing in Edinburgh and me asking them about their lives. It was actually a pretty normal interaction. I guess that’s how the relationships started and with the cultivation of friendships came the access into their lives.

DS: Were there any hurdles in your way?

Yoshi: Well perhaps getting too close to my subjects. But this was unintentional and in hindsight, I believe that it added to the project immensely. Since I had spent a significant amount of time with my friends from Muirhouse, I would end up present at activities, which by law are considered illegal. I could not photograph these events. This was for their safety as well as my own.
To get over this hurdle I had to represent the sensitive information that had unfolded in front of me in a way that was not directly linked to my friends or to myself. I would use metaphors or use objects and landscapes to represent certain incidents or events.

DS: What does Muirhouse say to you about modern Scotland?

Yoshi: I dinnae ken pal!
There is a whole underground culture created by the working class youths that has been hidden away for one reason or another. It seems like this environment is one that some folks want to keep hidden. So in a sense that says a lot about modern Scotland.

Document Scotland: You admit that Trainspotting was an influence on why you went to Muirhouse. The film of the book contained very strong imagery. Was that a problem or an influence for you?

Yoshi: I don’t know if the strong imagery in the novel or the film affected me in a problematic way but I can say for sure that it influenced my knowledge of the place and the culture.

DS: Can you tell me three things you have found out about Muirhouse that most people won’t know?

Yoshi: Most bad things happen behind closed doors and amongst people who are “involved” so the streets are pretty safe. From my experience a lot of the people there are extremely friendly and hospitable, more so than in the city center. The social situation in Muirhouse is more complicated than one can imagine.

DS: Yoshi is planning to bring out a book of the Plastic Spoon project sometime this year and we wish him all the best with this as it feels like a very strong representation of a part of Scottish society that is much over-looked. In closing we wanted to ask for some words about his favourite image from the project.

Yoshi: It’s a picture of a plate of sliced ham at the center of the table.
This photo means a lot to me because this ham in the middle of the dinner table represents the hospitality that the people of Muirhouse has shown me.
This photo was made on Christmas day 2009 at my friend Mikey’s parents house. Mikey’s brother had just got back from jail and had an ankle bracelet on because he was on house arrest. A few weeks later Mikey had to leave town to avoid being locked up.

More of Yoshi Kametani’s work from the Plastic Spoon project can be seen on his website.

A video shot by Yoshi relating to the project can be found here….