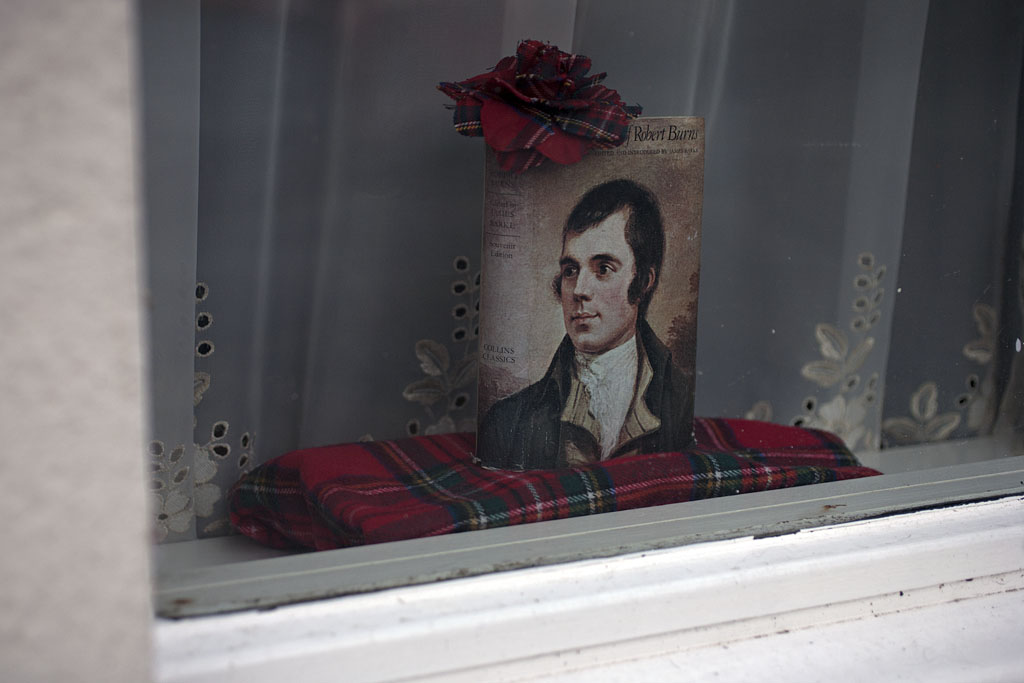 “”Oh wad some power the giftie gie us To see oursel’s as others see us!”

In asking God to give us the ability to see ourselves the way we appear to others, Robert Burns was musing on the personality and character traits that go into making us the individuals we are. But the quote might also work on the level of visual representation, for we are often curious as to how friends and strangers alike appraise the face that stands-in for us, that conveys our me-ness.

Burns if he were alive today might marvel at how only a few paintings and an engraving of himself had been replicated in all sorts of mediums, on all sorts of products, and in all sorts of locations throughout the world. In recent times Burns’ likeness has spread like a virus, those glossy dark locks, ebony eyes and rosy cheeks summing-up in three-quarters profile how we imagine the Bard really appeared to people of the time.

Though Burns lived a couple of hundred years ago, he must be the most-recognised Scotsman of all time, which is remarkable considering that photography, which makes portraiture both promiscuous and replicable, was half-a-century in the future when he died. As with the heroic portraits of Che Guevara and Bob Marley which adorn t-shirts, posters, and books the world over, the likeness of Burns has found itself standing in for a series of ideas…the discovery of potential in humble backgrounds, the inner-spark of poetry, romance and wanderlust, worldwide fraternity, and of course Scottishness.

If anyone is interested in what Robert Burns really looked like based on those artworks that were made in his time, there is a rewarding and well-researched article on the website of the Alexandria Burns Club. And from the news this week, a modelling of what Robert Burns’ face may well have looked like.

And if you love the Bard, and would like to live in Burns’ country, then you could always choose from Burns Road, Burns Avenue, Burns Grove, Bard Drive. Stephen McLaren went in search of Robert Burns.