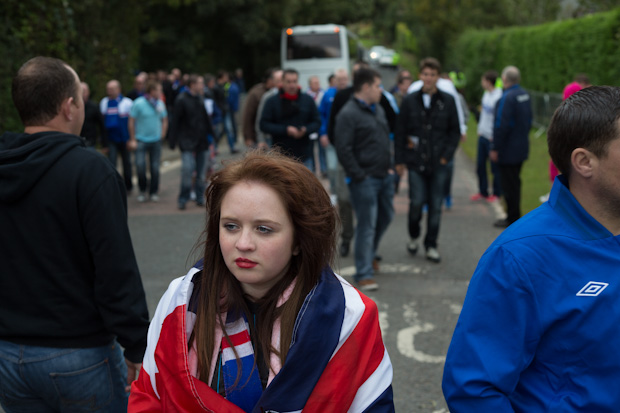 Life In The Third by Jeremy Sutton-Hibbert

In 2012, Glasgow Rangers Football Club were wound up and relegated. They started again at the bottom of Scottish Football League. Document Scotland’s Jeremy Sutton-Hibbert followed te team as they embarked on life in the Third Division.

‘These images are part of an ongoing project, a document of an unusual, exciting and historically unprecedented year in Scottish Third Division football. The project, Life In The Third, is a photographic journey through the Scottish footballing Irn-Bru Third Division which this year is graced by the presence of the mighty Glasgow Rangers Football Club.

Rangers have found themselves playing in the lowest division, not because of bad results on the pitch, but because of years of poor financial results and mismangement. These financial complexities culminated in the club being bought by a new investor, Charles Green, and the Scottish footballing authorities refusing to recognise this new financial arrangement, and as such Rangers were deemed to be a new club and company, and faced no option but to work their way back to glory from the bottom of the Third Division.”

“The images show what it means to be a fan in these interesting times, with the clash of a corporate footballing team versus semi-professional status teams, and a city team with their fans visiting rural towns and countryside local supporters. The photographs document the small stadiums across the Scottish landscape, stadiums which have crowd capacities of 2,000 compared to Rangers’ Ibrox Stadium crowds of 51,000. Life in the Third also shows that across the divide, fans are fans, fathers take their sons along to games, and certain footballing traditions are to be found despite the team supported or stadium locale.”