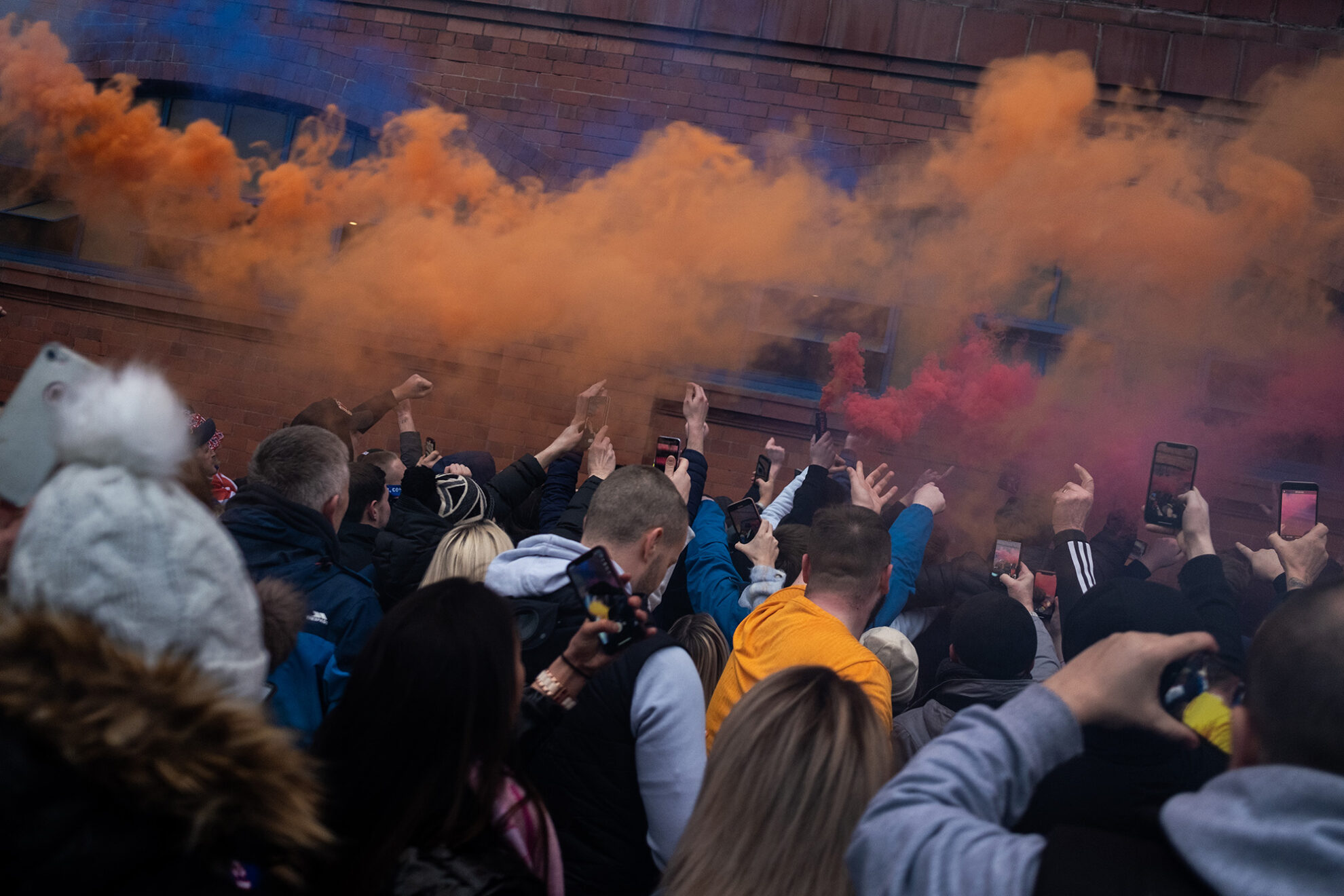 You may have noticed in the last week or two that Rangers Football Club in Glasgow have won the Scottish Premiership, denying their arch rivals Celtic FC, on the other side of the city, the chance to win ten titles in a row. Around the city posters have gone up, and graffiti appearing, #RFC55, the ‘Gers win their 55th title in their history and Rangers FC fans celebrate.

On the Saturday, as Rangers took on St Mirren, fans of the club began gathering outside Ibrox Stadium, breaching the Covid-19 CoronaVirus lockdown guidelines. Women wearing Rangers face masks telephoned their families, girls in sequins danced with smoke flares, and the Union Bears beat their drum and punched the air.

It’s never particularly easy being amongst Rangers fans to photograph, cameras are not always the most welcome, and this time there was the added piquancy of the chance of Covid-19 hanging in the air along with the red, white and blue smoke, as the large groups of jubilant fans congregated. I was keen to photograph the celebrations, continuing photographing life in my home city, and the images acting as an epilogue to my earlier project on Rangers in 2012, Life in the 3rd, (and here.)

On the Sunday, all eyes were on the Celtic FC game, would they drop a point against Dundee United, thus handing the title to Rangers FC? I followed the game on Twitter, refreshing every few minutes to check the score. 0-0, 22min played. 0-0, 44min played. 0-0, 60-min played. It was looking like it was going Rangers’ way.

My phone pings, a text from a Rangers-supporting friend, “Union Bears going to George Sq” was all it said. So I picked up my camera, grabbed two face masks just to be sure, and headed into the city. There in the centre of town half the square was mobbed. Boys danced with their shirts off, or wearing any number of iterations of the Rangers strip, plastic inflatable sharks swam through the air, cut out and keep cardboard trophies jigged up and down, flares and smoke bombs made the air acrid, and underfoot cans and bottles were crushed.

In the days that followed, as the media and social media discussed the congregating of so many fans in these Covid days, posters appeared in the Southside proclaiming Rangers manager Steven Gerrard a God, and new graffiti appeared in Govan. Another season nears its end, a winner has been declared. In a few weeks it’ll all be back to zero, and a new season begins.

All images and text Copyright © Jeremy Sutton-Hibbert 2021, all rights reserved. No unauthorised use permitted.