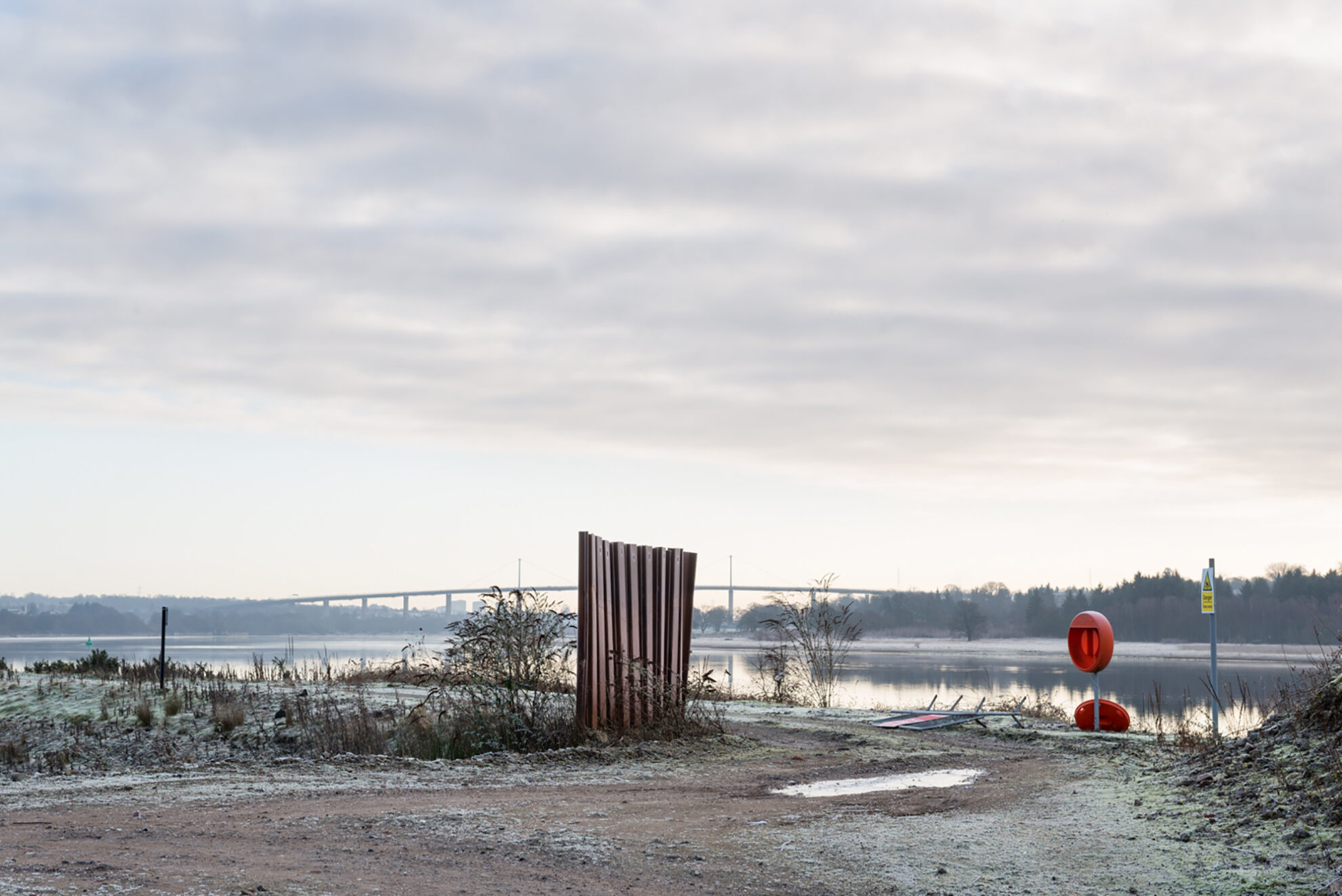 A journey along the River Clyde estuary.

Document Scotland speaks with photographer Michael Thomson, about his 10-year long project photographing the River Clyde estuary. We started with asking him for the title of the project?

I am in the position where I haven’t had to finalise a title just yet. The motto of Clyde Navigational Trust, a foreunner to ClydePort, is “Floreat Clutha” (Let the Clyde Flourish), and I like the idea of using that motto.

How long have you been working on the project, how often are you out there walking and photographing on the river?

The project started around 10 years ago, and with there being over 20-miles of river, I have found that there has been plenty to keep me interested. Although I don’t manage to get out each week, when I do, it is usually Sunday mornings.

What was the main impetus for starting the project, and for keeping it going? Do you have a connection to the area and River?

The impetus was the move to Glasgow. The office I worked in was on the Broomielaw and, living on the South Side, I cross the Clyde every day. I found the landscape interesting, and it got to the stage where I started leaving home early in the morning, so that I could explore further up the river, towards Finnieston then onto Govan, by this time it was obvious to me that I wanted/had to use my weekend to explore further.

I don’t have any connections to the Clyde or the area, I was brought up in the North East of Scotland.

What’s the aim of the work, do you see it as art, or social documentation?

The project fulfils my curiosity. I was brought up in the North East, and was not so aware of the scale the Clyde and what had been constructed on the river.

You have two photos from the River Clyde estuary in the RSA exhibition recently, are you planning a book or solo exhibition of the work?

That was the second time the RSA have accepted my pictures in their Open Exhibition. I enjoyed the process, and was disappointed that due to Covid-19 there was not an exhibition in their gallery this year, it was only available online. There are no plans at present for an exhibition or book, but I am certainly open to the idea.

There’s an absence of people in the pictures, any particular reason?

As I see the project, it is the landscape that I am investigating/looking at. There is always the chance that someone will walk through as I compose the frame. If someone does walk through, they are not normally in the position I would want, so I
wait for them to leave.

At some point I would like to add people to the overall project, most probably set portraits.

How has the River Clyde estuary area changed since you’ve been doing the project?

There had been a drive by the Clyde Waterfront Partnership from 2004 to 2014 to regenerate 20 km of the Clyde, a great deal had either been completed or started before I began this project. While I have been photographing the Clyde, the only structures that I remember being demolished, are the cranes at Fairfields, the dry dock sheds at Yoker and the Ballantine’s distillery at Dumbarton. There has been more in the way of construction, with The Hydro, Squinty Bridge and there is always seems to be a new residential site.

You’ve been shooting for 10 years, do you feel the project is nearing completion, or still some way to go? Have you an end in sight?

I have not set a goal for the project, and I enjoy photographing the Clyde – at the moment I cannot see this changing. However I do know that I need set a goal, and to edit what I have. This may lead to a new project within the overall project.

What are you looking for when you’re out walking, what’s your workflow?

When I visit an area, I start with an open mind, especially where the site has been cleared. One aim is to try to get consistent conditions, just to maintain an aesthetic through the project.

I was able to obtain the digital files taken from a brochure from the early 1960’s, the brochure maps all the companies that had sites on the banks of the Clyde from Broomielaw through to Gourock. This brochure helped me focus on new locations.

The workflow is fully digital, I moved over from film around 2006/7.

I notice you’re never on the River Clyde, always on the land, was that a conscious decision?

The only times I have been on the river are at the ferry crossings at Yoker and Govan. I think it would be interesting to take a boat down the river to photograph from a new angle, especially where I’m unable to access the river bank.

You will also see that quite a few, and maybe the majority of my images, have been made away from the river bank. I think this reflects peoples access, where historically industry had control of the river banks.

There are markers spaced across the river from Newark Castle to Cardross, which indicate the Western extent of Clyde Navigational Trust jurisdiction. I believe that there is only one left upright
and I would like to get out to photograph that marker.

Are you a prolific shooter, are these images edited down from many, or do you photograph sparingly?

I don’t know if I am prolific, but having been working on the project for so long, I do have quite a lot of pictures in the portfolio. If you are asking about being prolific each time I set out, then it is a mixed bag, dependent on where I am, the weather and my mood.

Have you other projects and photographic work on the go?

Yes, I quite like working on projects. For example, the walk to work inspired me to make a project on the political posters and graffiti in the run up to the 2014 independence referendum. And for a period I was working up in the North East, and have a project on The Cabrach, an estate in Moray.

I don’t have anywhere where my work is available on line yet. I do need to find time to create a web site.

However, I am not totally isolated, I am a member of Street Level Photoworks in Glasgow, I also attend Scottish Photographers in Glasgow and also a RPS group in Lanarkshire, where I can share projects, and get feedback.