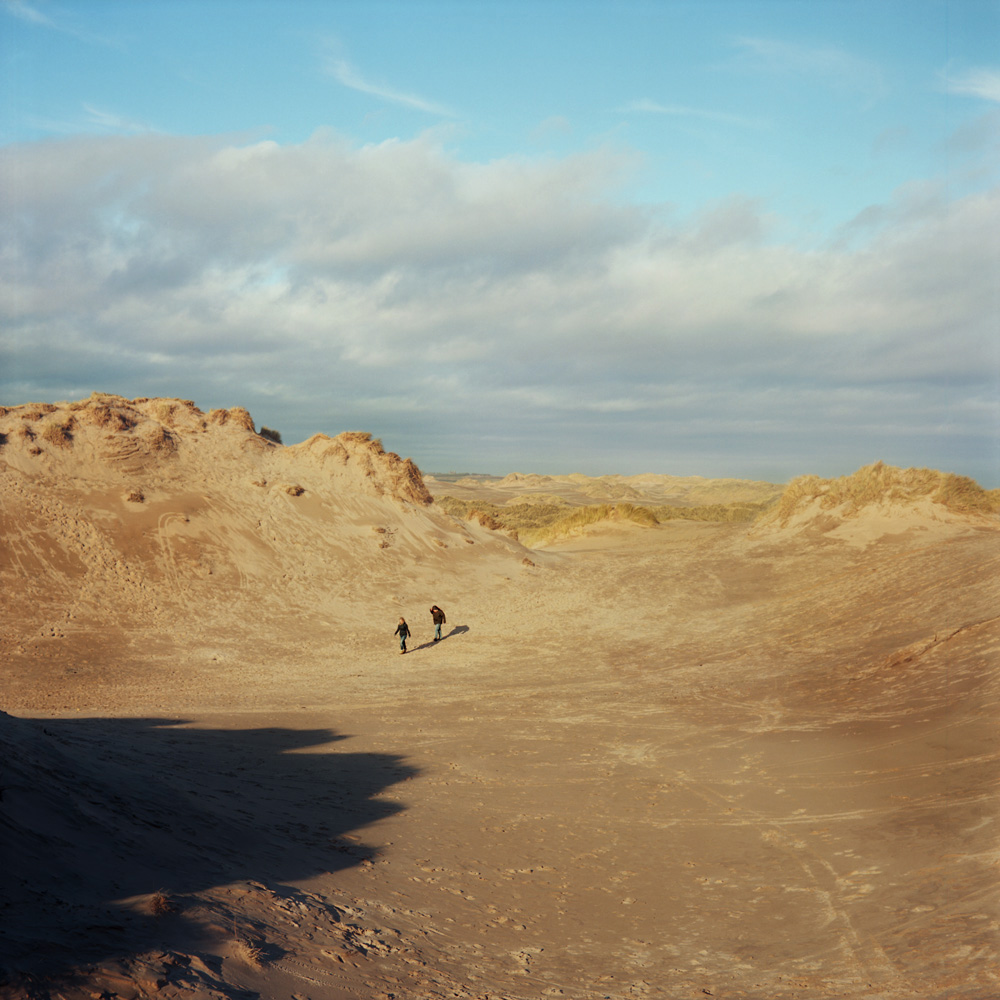 The Dunes by Sophie Gerrard

The Dunes by Sophie Gerrard is her landmark series which looked at the environmental and personal challenges and costs a community endured as they faced up to a multi-million pound development which would alter their lives forever.

“Sophie Gerrard’s project The Dunes, is about a Site of Scientific Interest in Aberdeenshire that Donald Trump has turned into a golf course; but it’s not just about that. Depicting local people whose lives and livelihoods have been irrevocably changed by Trump International Golf Links it’s also a story about the power of money and the lack of regard for the environment.

Foveran Links used to be home to an enormous, shape-shifting network of sand dunes; constantly moving, it created the unique community of plants and animals that made it an SSSI. This designation should have ensured it was protected, and initially Trump’s planning application was refused. Then the Scottish government, lured in by the 6000 jobs the American billionaire was promising to create, intervened. The jobs have not materialised but the golf course has, riding roughshod over local people; those who have refused to sell up and move on have found their houses boxed in behind giant bunkers of earth and screens of thick spruce and pine.

These people are not happy but there’s little left they can say – they can’t afford to fight Trump and the army of lawyers he can fund. In Scotland this story has special resonance, recalling the Highland Clearances and the depopulation forced by landowners; it also recalls China’s famous holdouts, single houses standing firm against developers. These disenfranchised locals can’t speak out, Gerrard’s images eloquently tell their story.”  – Diane Smyth, Deputy Editor of the British Journal of Photography, 2012.

“The vast shifting dunes at Foveran Links, Menie, were once one of the few remaining examples of true wilderness in the UK. This dynamic landscape, a wonder of the world, has, however, been stabalised and sterilised, bulldozed and flattened into “The greatest golf course in the world” according to Trump. The Dunes presents a social document and intimate portrait of a vulnerable community and landscape on the Menie estate in Aberdeenshire. Portraits of the residents and their personal accounts and memories communicate not only the local, environmental and political impact this controversial development has had on such a unique and fragile landscape, but also the deep personal and emotional scars left on a community bullied into submission and left with no voice.”  – Sophie Gerrard, 2012

“These dunes are the jewels in the crown of our national identity. The equivalent of our rainforests, once they’re gone, they’re gone.”  – Dr Jim Hansom, Geomorphologist, University of Glasgow

Susan Munro
Susan Munro is one of the residents living on the Menie estate. Having refused an offer from Trump International to buy her home, she  has seen the landscape outside her door change dramatically over the  past few years. “Bringing up my  two little boys here,  they had everything you could want growing up,” she recalls. “It was two minutes to the beach,  and it was the busiest house in the summer, full of kids, happy  children all the time. And now that’s come to a halt.” Munro’s home is situated in the middle of the Trump development; the ground in front of it has been raised and levelled and a huge pile of sand; set to be a car park; now blocks the view from her kitchen window. “I sometimes feel like a captive in my own house. I go out the door and I’m stopped, I get 100 yards out the door and I’m stopped by them, “where are you going, this is private land.” It happens everyday. I get stopped when I’m out walking the dog, or when I try to go down to the beach. They try and stop me, and then they follow me, they get out of their jeep and they follow me all the way down onto the beach behind me and the dog. It’s awful.””They sit up there in their 4x4s on that bank of sand facing my house and look right in at me,” she says. “It really cheeses me off. I used to know these dunes like the back of my hand; now I don’t know where I’m going. It’s changed so much. It’s heartbreaking.”

“The great importance of the sand dome was that it was mobile, it was a great shifting system, it wasn’t
fixed. So if you plant it, if you try and stabilise it you will ruin the very aspect which made it unique.
If you halt the progression of these dunes by planting them, you’re effectively sterilising the entire
dynamic system.” – Johnny Hughes, Director of Conservation, the Scottish Wildlife Trust.

Michael Forbes
Forbes and his family have lived on the Menie Estate for generations. His uncle, father, grandfather and great-grandfather were all fishermen. “My uncle, who was a salmon-fisher, bought this place in 1956,” he explains. “I left school and came to work for him, until eventually my father and I bought a salmon station and we worked that together. “When I first came to live here, there was no green at all, only sand. I’ve watched it change and grow for the past 40 years. This place means peace and quiet; it’s paradise. Where else would you find anywhere like it? There’s nowhere.” That all changed, of course, with the advent of the construction work. “The wildlife is just outside my door, or at least it was till the diggers came,” he recalls.
One of the golf course’s most outspoken critics, Forbes has been at the forefront of the planning battle against the development, and in return has been branded a “loser” and a “village idiot” in a statement issued by the billionaire himself. In 2011, Forbes’ access route through the dunes to the sea was closed by Trump. Which means that he no longer fishes for salmon. “Now that the access is blocked, well, I can’t fight him,” Forbes says. “He’ll win; he has too many lawyers.” So why does Forbes remain on this land rather than sell up? “I think if I’d been younger, I’d have taken [Trump’s] offer [to sell up],” he explains, “I’d have sold. But I’ve been here for 40-odd years now, and I want to stay. “It’s a wild place. It’s my home.”

David Milne
Milne bought his home on the Menie Estate in 1992; a former coastguard station, it sits 30m up and 300m back from the high-tide mark. From the roof-top lookout tower you can see the spectacular 40-mile coastline of Aberdeen Bay.
“It’s the serenity,” he says, explaining the attraction of the place. “You can hear the waves, the birds, the sea. It’s pretty close to being an untouched landscape – or at least it was. That is what I fell in love with 20 years ago when I saw it.”
With the arrival of the golf course, things have changed. “Trump described my home as an eyesore: he didn’t want his golfers to see it,” he says, adding, “They came and planted Sitka spruce and Scots pine, which blocked our view – but half of them are blown down or dying now. Fully grown trees planted at the top of a hill need a lot of water. We’re 100ft up and 700ft back from the high-water mark and we regularly get salt spray on the windows. All the wind that comes off the sea here is heavily laden with sand and salt. Those trees are brown on the seaward side. They’re dying; the salt in the air is no good for them.
“The dunes were a very strange and beautiful place,” he reflects. “It was an evocative site, and isolating – there were spots where you could see nothing else. We used to walk down through the dunes every weekend, then up the beach to Newburgh. It was a perfect place to live. People say it’s only a patch of sand, but it’s not. It was a unique and valuable wilderness, valuable to Scotland, to the UK and to those of us who live here. This development is a tragedy.”

“By turfing and stabilising the dunes, the unique landscape has now lost all its scientific value. What was once a valuable environmental asset for the UK has been lost.” – Dr Jim Hansom, Geomorphologist, University of Glasgow

“SSSIs are designated in the national interest, not just in the interest of Scotland. This is a decision which could have implications for protected areas of coast all over the UK.” – Johnny Hughes, Director of Conservation, the Scottish Wildlife Trust

More images from Sophie Gerrard’s project can be seen on Photomonitor. These images appeared, along with an article by Peter Popham, in The Independent in July 2012.

Diane Smyth was the deputy editor of the British Journal of Photography, and has also written on photography for Aperture, Creative Review, PDN, The Philosophy of Photography, The Guardian online, The Sunday Times online and The Sunday Herald. http://www.bjp-online.com/