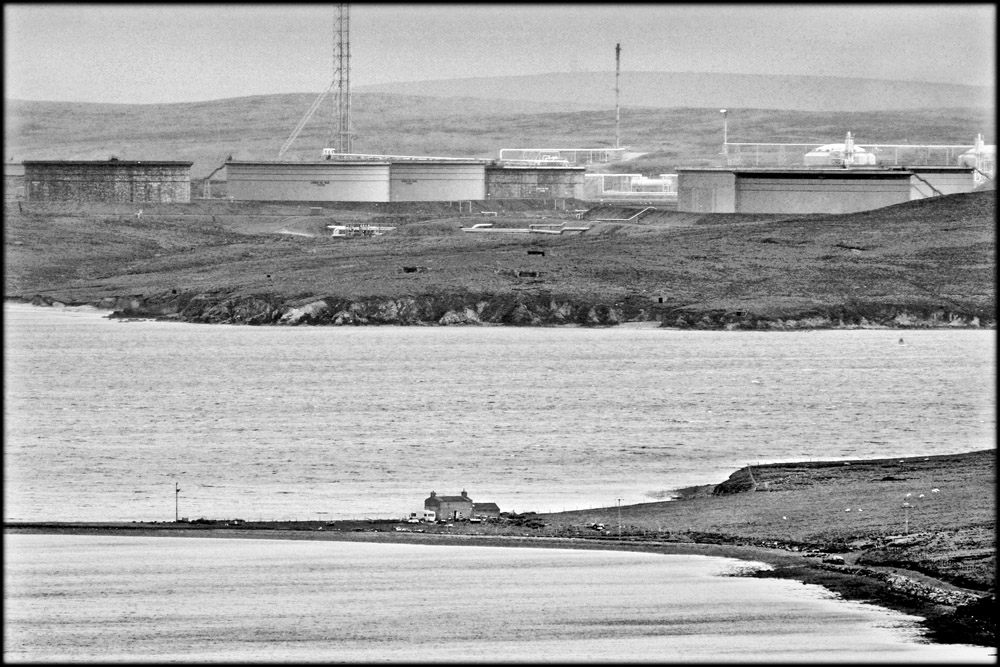 We’re very pleased to be able to show the Shetland photographs, from the 1970s, of Scottish photographer Tom Kidd. The work was originally published as ‘Life In Shetland’, by publisher Paul Harris, and it is this book that we saw, in the home of Edinburgh photographer Murdo MacLeod, which caught our interest.

Tom Kidd has very kindly answered some questions via email about his Shetland photography, more of which can be seen here on the (Tom Kidd) Black Gold Tide website. (Make sure to look for the Browse the Archive button in the menu bar…).

Document Scotland- When was your Shetland project shot, and for how long did you work on it?
Tom Kidd- 1975 to 1979. I think I was there on and off for about 10 months….seemed longer.

DS- How did it come about, via a grant or bursary, or assignment?
TK- I was awarded a Kodak Bursary on leaving Napier College.

DS- What was the aim, or brief, for the project?
TK- To try and document the effect North Sea oil was having on Shetland.

DS- A lot of readers like the technical information of projects, what cameras did you shoot on, and films did you use ? Do these matter to you?
TK- All shot on Nikon FM cameras with mainly 35mm lens. Some with a 24mm and few with a 135mm I borrowed from Chick Chalmers. Mostly shot on Kodak Tri-x developed in D76. The FMs went everywhere with me. Wonderful cameras.  My wife Clare still has one and it amazes me how big and bright the viewfinder is compared to current digital cameras. I just wanted a small robust camera that was reliable.

DS- How much did you shoot over the period of the project ?
TK- Probably shot about 200 rolls, but honestly never counted. I would shoot about 20, 30 or 40 rolls then return home to Edinburgh and develop them in big batches in our darkroom in Polwarth. Sometimes with near disastrous results.

DS- We’ve seen the books, ‘Life In Shetland‘, and ‘Black Gold Tide‘, can you tell us the story of how they came about and how they work together?
TK- Chick Chalmers was working on his ‘Life in the Orkney Islands‘ book at the same time as I was doing my Shetland project. We met as Stills Gallery was taking shape and Chick pointed me in the direction of his publisher, Paul Harris. Paul was keen to do it, and later went on to do ‘Life in Caithness and Sutherland’ by Glynn Satterley.
A book was a real bonus, and something that gave me the shove I badly needed to carry on with the whole thing. I had become disheartened, felt I wasn’t producing anything worthwhile. I had gone off to photograph a year in the life of a prep boarding school on Speyside. Going back up to Shetland with fresh eyes, a purpose and a deadline all helped. I was very fortunate to be helped and encouraged by a group of friends who really lifted the awareness of photography in Scotland in the 70’s.
Sadly their efforts in getting Stills Gallery off the ground and pushing the Scottish Arts Council into being pro photography seem to have been ignored or forgotten. The late Richard Hough (famous for his bus queues) who was one of my lecturers, and a huge influence, the late Mike Edwards whose large format landscape photography was exquisite, David Pashley who pushed the Photography course at Napier to new levels, my flatmate Chick Chalmers, Lesley Greene and Lindsay Gordon at the Scottish Arts Council. There was a real buzz at that time. I had two “models” for ‘Life in Shetland’ in the form of Chick’s Orkney book and Gus Wylie’s wonderful Hebrides book.
‘Black Gold Tide’ was Tom Morton‘s idea. It was fun to go up and shoot some more, and to go through all the old contact sheets. I found quite a few nice shots that I had never seen or noticed before. Also alarming to see how crap a lot of the early stuff was. Tom’s enthusiasm was infectious and he put the whole thing together.

DS- Did the work get exhibited?
TK- Not at the time. The Bonhoga Gallery in Shetland showed some of the pictures about 10 years ago.

DS- How was it, as a non-Shetlander, working in Shetland on the project? Were people accommodating to the ideals of the project ? And how was the work received by the Shetlanders?
TK- Like anywhere I suppose. Some were helpful and others weren’t. BP refused me access to the terminal at Sullom Voe which didn’t help. Lots of delightful people who did help me. I was at Napier with a Shetlander, Charlie Robertson. He was a help with a few pointers.
When I first went up there, I rented a cottage in the middle of nowhere. That was quite a lonely existence, and I found it hard work. Far more productive staying in B and B’s. Living with locals just gave me a better feel for the place I think. I ran out of money fairly quickly as well, so worked on building sites and as a furniture van driver to keep going. Again, that allowed me places and people I would not have encountered otherwise. There were mixed reactions when the book came out. I think the younger folk were more open to it, while some of the older generation expected a nice gentle collection.  One review in a Shetland magazine said I made Shetland look like war torn Poland. It didn’t sell very well at the time.
Chick Chalmers unwittingly ended up with about 50 copies. The publisher closed down and Chick thought he was getting a load of copies of his own book cheap from the liquidator. I wish I could have seen his face when he discovered they were unsold copies of mine. His Orkney book had long since sold out. I gave him a Nikon camera in exchange for them.

DS- Have you been back there recently, shooting anything else? Any new projects on the go that you’d like to share with us?
TK- Not for been there for a good few years. Last time was flying the air ambulance. I have a couple of projects in mind and I will let you know when they start taking shape.

DS- Many thanks for sharing the work, and the story.

All images are of course Copyright © Tom Kidd 1975-2013, all rights reserved. Tom Kidd can be contacted via his Black Gold Tide website page.