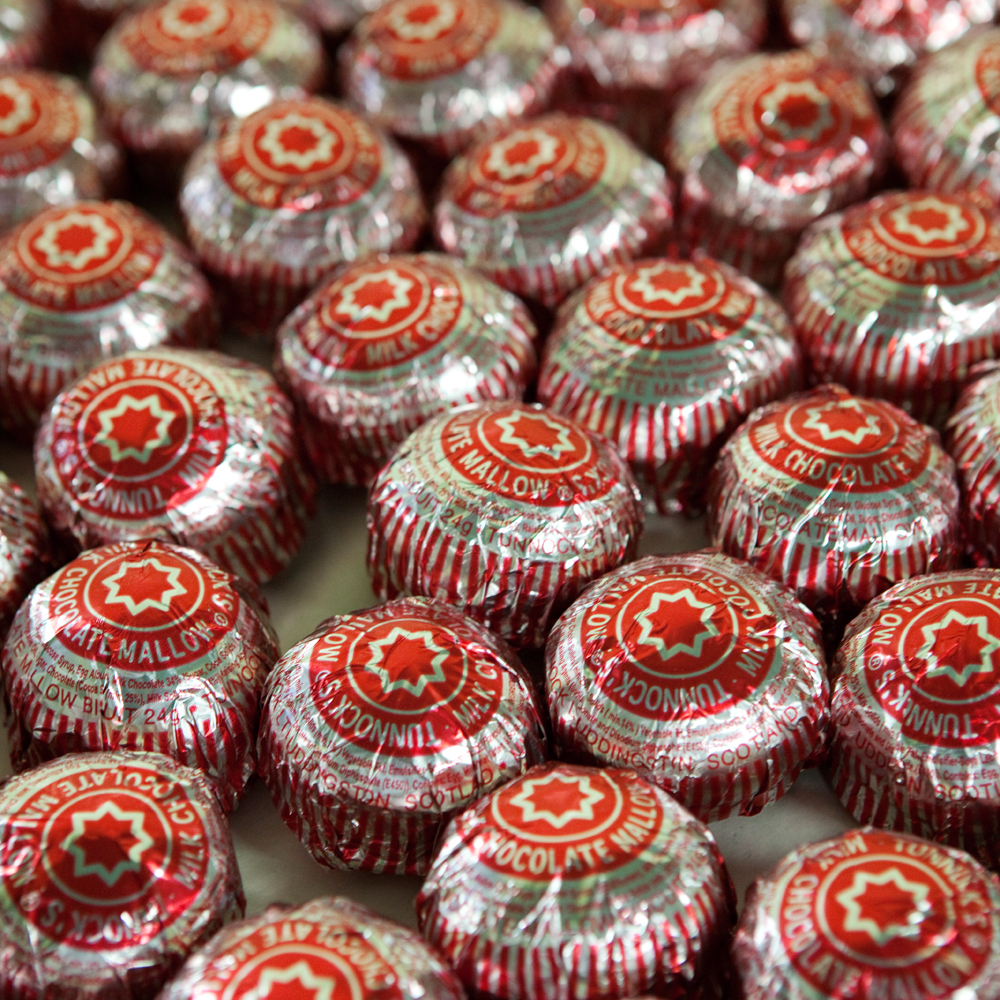 Tunnock’s, the iconic Scottish, family-owned chocolate company is headed by Boyd Tunnock CBE, the founder’s grandson, who celebrated his 80th birthday in 2012. The company was established in 1890 by Thomas Tunnock and still produces the iconic snowballs, caramel wafers, caramel logs and Tunnock’s teacakes famous all over Scotland and the world. With it’s perfect combination of nostalgia and chocolate, this instantly recognisable and increasingly popular Scottish brand is seeing record sales. Boyd Tunnock is quite a character regarded fondly by some as a present day Willy Wonka. Some of the staff have worked at the factory for 30 years.

“This is my Hornby Dublo – my train set. There’s nothing I like better than watching these biscuits go round and round, 600 a minute. At Tunnock’s we’ve been lucky – in that we’ve been making things that people want to buy.

There’s no secret, there’s a trick maybe, the trick is to get everything right.”

“I originated the teacake, but the caramel wafer is probe my favorite because we make more money off it. The design we’ve got to this day in caramel wafers was not originated till 1955. It works so we haven’t really changed since, you know, way back.

My father never really said sit down and I’ll tell you about it because he was too busy looking ahead. He died when he was 86, when he was about my age he said the only thing I’m short of now is time, and he was right. During the wars he was the biggest private caterer in the Glasgow area. I’m just an amateur compared to him.

You keep trying various things, I’ve got a new idea of a biscuit, I’ve only made handmade samples so far, it’s a kind of nougat wafer biscuit. It’s a tricky thing to make.”

“We use an Italian meringue, for that perfect texture, but well, you can’t photograph any further than here I’m afraid, I can’t let you into that area.

The last 3 mornings I’ve been in about ten past 6, then I go home about half past 7 for a cup of tea, read the Herald, then about 8 o’clock then I’m out on the factory. When I go out around the factory then I’ll say to them, if you work for me you’ve got to smile. I do that you know, and they laugh. Most of the time it’s alright, you know, I’m reasonably easy to get on with. As long as you do it right.”

“You don’t change a winning team, it just keeps you going all the time. It comes from the top and radiates down. What happens on the factory, if everything’s right pat me on the back and if something’s wrong then kick me in the bum because I haven’t got it right, I haven’t told somebody something.

I’ve got an engineer Bob, he’s been with me 48 years. He gave me this framed poem which goes something like this…

Life’s too short for greetin, there’s things you cannae mend, so leave them be and start again the world’s no gonna end. You’ve time to plan so many things, it all depends on you, so shake yourself you wackaloon, get up and do it noo.

I think that’s it really, don’t sit still, get up and do it, try it. That’s the whole thing, business is easy, but you’ve got to be very careful. Don’t get complacent, you got to keep thinking, and keep striving for perfection, you’ll never get it but keep striving for it.”

This body of work was originally commissioned by The Telegraph Magazine and was accompanied with words by Richard Preston, see the full piece and the great on-line design and layout here.