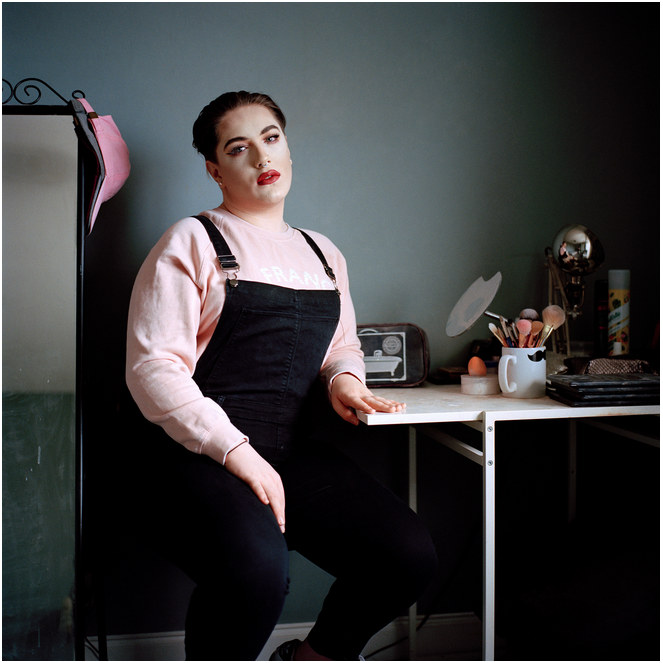 ‘Masc’ – by Craig Waddell is a series of queer portraits that challenge the outdated idea of conventional masculinity. Document Scotland first saw Craig’s work at The Edinburgh College of Art degree show in 2017, we wanted to know more and so Sophie chatted with Craig recently about his motivation behind making the work and what the portraits mean to him. We’re grateful to Craig for taking the time to discus the project with us which is exhibited at the RSA New Contemporaries 2018, opening this week.

DS: Hi Craig, thanks for taking the time to do this interview – what is Masc about, can you introduce the project?

CW: Masc is about contemporary masculinity in the queer community, and the different ways we can see it interpreted and realised in the individual. Personally, I’ve always been interested in the dynamics of masculinity – from my experiences in the gay community especially, I often felt there was a rejection of more feminine identities in favour of the masculine. Gender non-conforming behaviour and presentation is often celebrated as an act of performance or as an entertaining gimmick, but for many of us, it’s our lived reality and something that should be respected and acknowledged.

DS: It’s an interesting view point, in your opinion why do you think masculinity is an important subject to be talking about currently?

CW: In recent history we’ve really seen these issues come to the forefront of societal conscious, and I felt it was a very exciting and important time to document some of the incredible individuals that make up our community.

DS: You’ve mentioned your personal experiences and how they have motivated you and this project, is it an autobiographical body of work?

CW: Masc as a whole was borne out of my personal experience reconciling my non normative identity, so I would say there is a definite autobiographical quality. So much of my personal discovery was fuelled by my interactions with my contemporaries, so I sought to explore and record that.

DS: There’s a sensitivity to the portraits, each is naturally lit, fairly formal, in calm personal surroundings with some very giving expressions…. tell us a little about the subjects, who are they and who are they to you?

CW: I wanted to create a series of photographs that really celebrated diversity, and put the dignity and character of my sitters first. I chose to use the formal portrait as my medium to form a disruption of gender norms and societal expectation, which classical formal portraiture often reinforces.

The end result is inexplicably bound to the process of medium format analogue photography, that carried the drama, depth and subtlety I felt the subject mattered deserved and needed.

The only qualifying criteria for my sitters was that they identified with my concept, which resulted in a wide range of identities presented, definitely not limited to the outdated notion of the biological male. They range from close friends within the community in Edinburgh, to those I was connected with through social media and then photographed. Although the style of shooting is deliberately formal, the sessions were always inter-dispersed with incredible conversation. That was one of the best parts of undertaking this project – I really got the opportunity to learn about who they are and what they are about, as well as connecting further with close friends, which then informed the end result, and I feel gave that personal connection that comes across in the portraits.

DS: It’s interesting you say that, I personally feel that’s one of the greatest privileges about making portraits, that time and space to connect and share stories – people can share the most extraordinary things… Are there any stories you’d care to share with us – from those conversations?

CW: In terms of particular photo sessions, I’d have to say one of the most special ones was with Cameron Downing, who was 17 at the time and studying makeup artistry at college. Having never met in person – we were connected via a Facebook callout I did for sitters for the project – I shot the portrait in his bedroom at his parents house, and we spoke about what it was like to be that age and not really have access to a major support network for young queer people, which is the club scene.

Another great moment in the project was being able to photograph James Faulkner, who I think is such an important member of the community. I see James as one of the founding members of the queer community in Edinburgh as it stands today – as one of the original drag performers in the city, he’s nurtured and supported a wide variety of performers and other queer people, and is a member of the Dive performance collective. My portrait was by no means the first (and I assume definitely not the last) time he’s served as a subject and muse for artists, and we were surrounded by various prints of different works he’s been a part of, as well as his incredible collection of antiques and curiosities, many bequeathed to him from his grandmother. It was just really lovely to get to know James better, and hear about his rich, and sometimes difficult life story, and we spoke about how the queer community was evolving in Edinburgh. It was one of the first portraits that I took for the series, and it was a real defining moment for how the project would continue.

I’ve always tried to keep a diversity of viewpoints in the project, so being able to include Katharine, a dear friend of mine and a queer woman, and Zachary, a trans man and one of the loveliest people on the Edinburgh queer scene, was incredibly important to me. They also turned out as some of my favourite new photos of the series.

DS: Are the portraits all made in Edinburgh? How have your experiences affected your opinion on the LGBTQ community in this city?

CW: Most of the portraits are shot in Edinburgh, with a few featuring people based in Glasgow. I think the LGBTQ community in Edinburgh definitely has it’s shining moments, and some of the people in the series reflect that, from inspiring creatives and performers to some of the new generation of queer people in Scotland. In general though, I do think Edinburgh is a smaller scene than other cities such as Glasgow and Manchester, and maybe sometimes we have less opportunity and resources. However, I have a lot to thank Edinburgh for – it has had a really profoundly positive effect on my personal development, and enabled me to be ever more confident and comfortable in my identity, no doubt due to the welcoming and accessible nature of the community here.

DS: It’s mature work for an undergraduate final project. How have you found making the transition from BA to professional photographer?

CW: The project was originally created for my final year degree show submission, and has formed the main basis of my practice post degree. It marked a real turning point in my practice – although I think I’d created some really wonderful portraits prior to this project, this was the first that felt fully cohesive and realised as a body of work, and very important to me as it interrogated a lot of issues very close to my heart.

I have a lot to thank this body of work for – it landed me my first big paid portraiture commission, on the Faces of a Vibrant Economy project for Grant Thornton and Getty Images, and I’ve also been fortunate to exhibit it in a few shows since my graduation, including at the Edinburgh Art Fair and as one of the finalists of the Scottish Portrait Awards 2017. Masc in it’s most recent iteration is being featured in the RSA’s New Contemporaries for 2018 – something I’m incredibly proud of and excited to be a part of.

I still definitely feel that I’m still finding my feet in the professional world of photography, and I’m very excited and optimistic about what is coming next in my practice.

DS: Is this a continuing project?

CW: After continuing the project until recently, I’m thinking of taking a break from it and exploring some new avenues. However, I feel it has become a real centre-point of my photographic practice, and something I’ll always be returning to and working on.

I’m currently doing a bit of thinking and research about future projects – something I’m particularly interested in currently is the increasing phenomenon of younger people embracing their queerness, and being able to define themselves far younger than I was ever confident enough to. I imagine this is linked to more progressive attitudes in society, and something I think is incredibly exciting and something I’d love to explore.

Later this year, I’m going to be working on a new series of portraits of performers during the Edinburgh Fringe Festival, exploring the concept of the persona of the performer, which I’m also very excited about. I’ve been fortunate enough to meet some incredible people in the performance community in previous years of the Festival, and I’ve made it a priority this year to produce a series of portraits that attempts to capture that vibrancy.

DS: Thank you so much for talking to us Craig – we wish you all the best with your future plans and the continued success of your work.

See more of Craig’s work on his website www.craigwaddell.com ‘Masc’ will be shown at The Royal Scottish Academy New Contemporaries 2018 from 24th March – 18th April 2018.