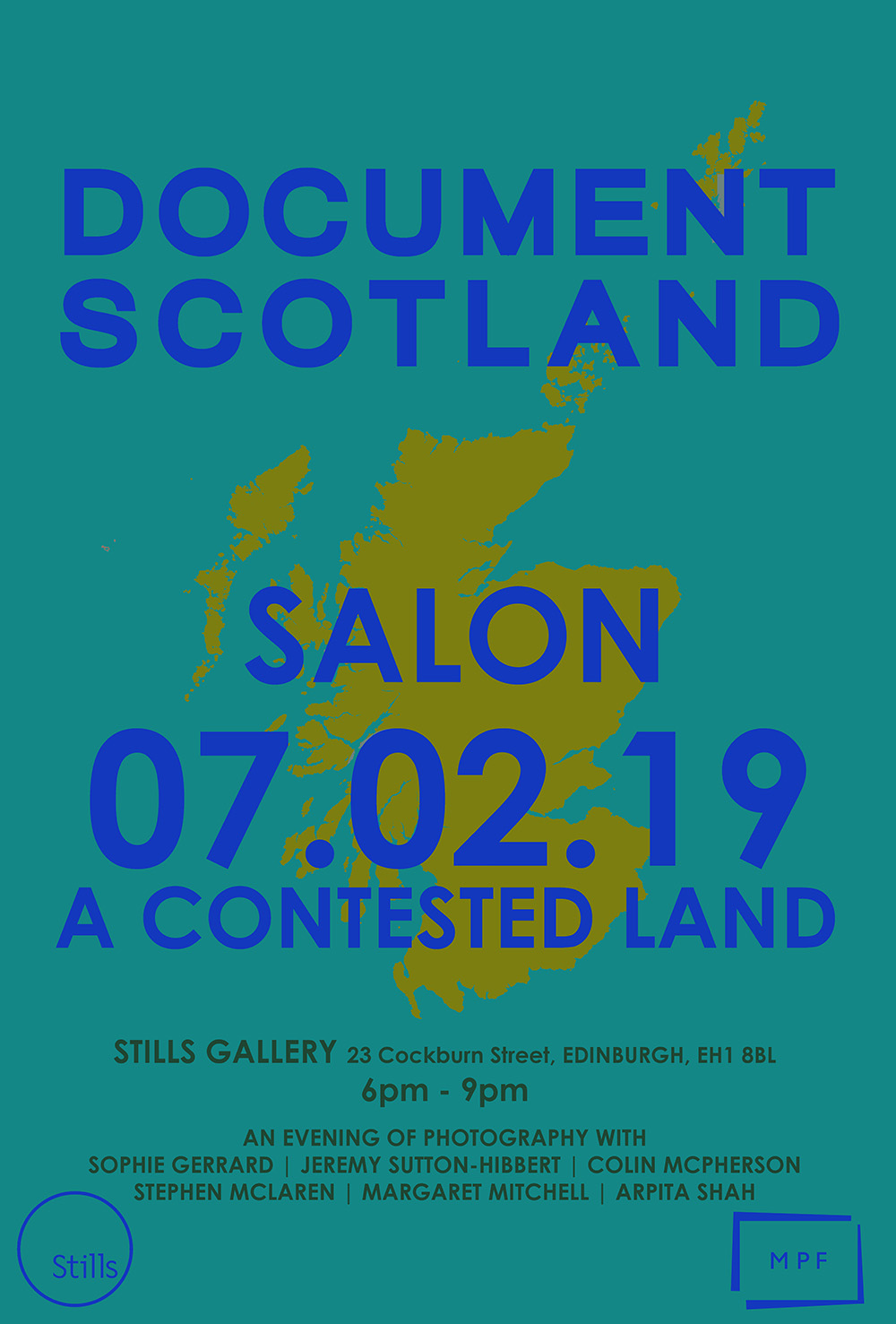 As part of the launch of A Contested Land, the first exhibition of which is currently on show at the Martin Parr Foundation in Bristol, we are staging one of our popular salon evenings at Stills Gallery in Edinburgh.

The event takes place on Thursday, 7th February and as well as presenting work from our new show, we are delighted to have two additional contributors to the evening’s entertainment. This will be our third salon at Stills, and we are very much looking forward to a stimulating, relaxed and enjoyable event.

Central to the evening’s programme will be presentations by three of Document Scotland’s photographers who will each talk about their own individual projects: Jeremy Sutton-Hibbert will guide us through Let Glasgow Flourish, his insider’s view of street politics in his native city, which has been the frontline in many of the recent political campaigns, from the Independence and Brexit referendums, to protests about refugee rights, arms fairs and nuclear weapons. Sophie Gerrard will talk about The Flows, her evocative and beautiful study of the unique landscape of the Flow Country in Caithness and Sutherland. The work discovers and explores issues behind the degradation and regeneration of this iconic location, which now enjoys protected status from rapacious exploitation. Colin McPherson’s Treasured Island looks at contemporary life through a historical prism on Scotland’s smallest permanently-inhabited inner Hebridean island, Easdale in Argyll. By weaving together the past and present, he tells the story of an island whose very survival is always in question, but whose population – numbering just 65 – is as resilient and imaginative as anywhere. Finally, we will look at Stephen McLaren’s Edinburgh Unchained, a fascinating investigation into the links between the wealth of Edinburgh and the city’s links to the African and Caribbean slave trade. This body of work poses questions which go beyond the merely rhetorical in seeking an explanation as to why Scotland’s capital still benefits for the actions and injustices carried out by Scots abroad in the 18th and 19th century.

We are delighted also to be able to include work by two of Scotland’s most outstanding current photographers, both of whom are making consistently captivating work. We have previously featured Arpita Shah’s work live and it is a pleasure to be able to invite her back again to see her latest stories. She is a photographic artist and educator based in Edinburgh and works between photography and film, exploring the fields where culture and identity meet. As an India-born artist, Shah spent an earlier part of her life living between India, Ireland and the Middle East before settling in the UK. This migratory experience is reflected in her practice, which often focuses on the notion of home, belonging and shifting cultural identities. Arpita is also co-founder of Focàs Scotland, an initiative that supports local and international emerging photographers.

Glasgow-based Margaret Mitchell’s work spans over two decades and has recently started to receive the recognition it richly deserves. A first-time collaborator with Document Scotland, Margaret will talk about two projects: Family (1994) & In This Place (2016-17). Taken over 20 years apart, these two connected series ask whether the choices we have in life are ultimately predetermined by upbringing, locality and socio-economic position intertwining with the issues of social inequality that they raise.

Document Scotland is looking forward to a great event and we hope that those who have already bought tickets will have an enjoyable and thought-provoking evening.

Please note that the event is now officially sold out, however, if you wish to attend, please email for the up-to-date situation regarding the waiting list and returns.