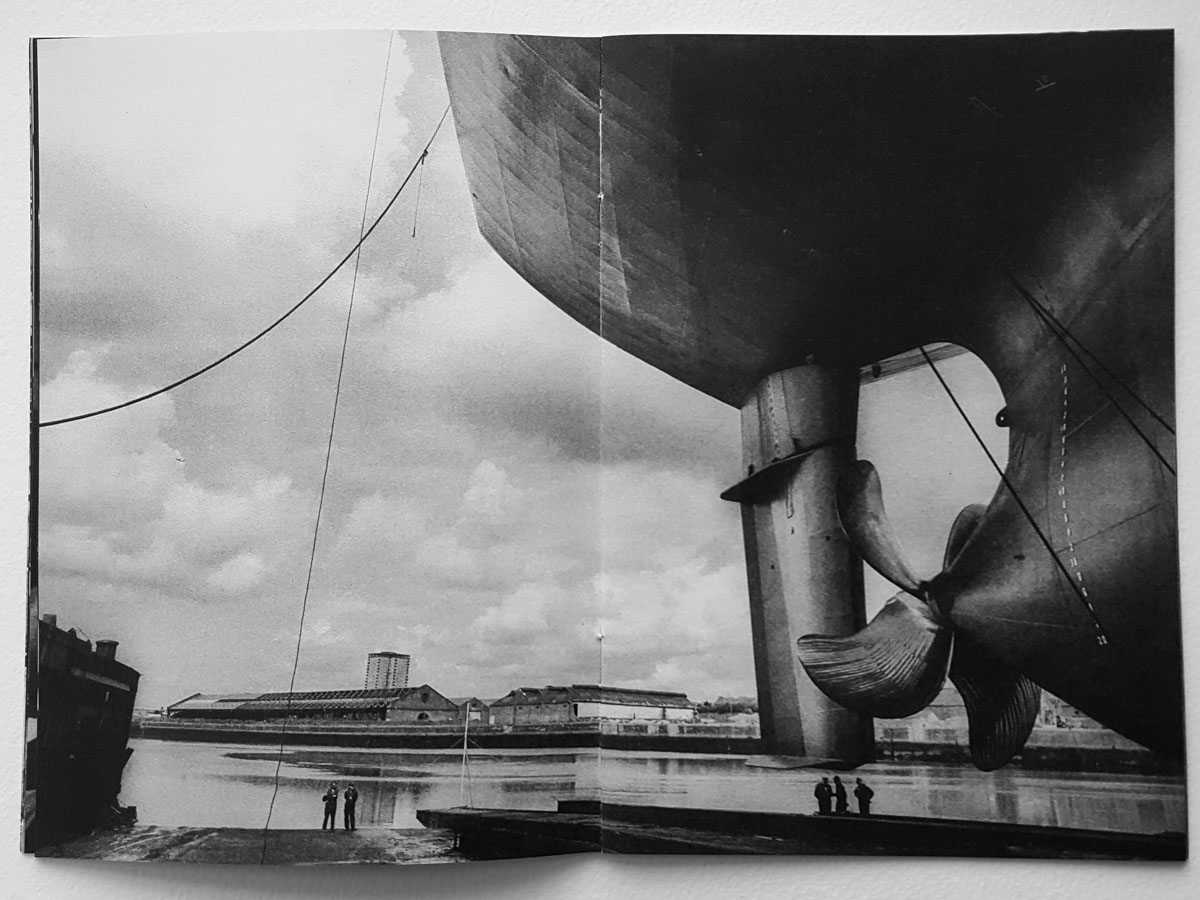 Shipbuilding On The River Clyde

Shipbuilding On The River Clyde, by Jeremy Sutton-Hibbert

I’m pleased to announce that some of my archive work, of shipbuilding on Glasgow’s River Clyde in the 1990’s, has been published as a small book, and is due to be exhibited over the summer here in Glasgow.

The photographs, shot in the Kvaerner, Yarrow and Ferguson’s shipyards on the River Clyde, have been published as a limited edition book by the industrious Craig Atkinson at Café Royal Books: ‘Shipbuilding on The River Clyde’.

A selection of the work from the book will be exhibited, in a group show ‘Govan / Gdansk’ at Street Level Photoworks gallery in Glasgow, Scotland, from 4th June until 31st July. My book will be on sale at the show also, and on Saturday 4th June I’ll be talking about the work at the gallery. Please join us!

The book and exhibition were showcased a few days back by the Daily Record. You can read the article here, and here’s how it looked in a pretty decent spread.

This exhibition at Street Level, curated by director Malcolm Dickson, will encompass the work of four photographers- Michal Szlaga of Poland, Nick Hedges of England, Raymond Depardon of France, and myself. The works on show link the shipyards of Govan in Glasgow and Gdansk in Poland and their post-industrial decline and resilience.

Michal Szlaga’s ‘Stocznia/Shipyard – Documents of Loss’ is the outcome of a 15 year project in which Szlaga has documented the buildings of the Gdansk Shipyard, their gradual demolition and the construction of new ones. For Szlaga, the shipyard represents a dynamic landscape of industrial architecture reflecting history and its people, the images loaded with memories of the turbulent times of the anti-communist revolution.

In 1980, the French Magnum photographer Raymond Depardon was commissioned by the Sunday Times to record aspects of Glasgow and the evocative results are now lauded as telling an unremittingly bleak portrayal of urban deprivation and decay. In 1968 Nick Hedges was commissioned by the housing charity Shelter to document the abject living conditions being experienced in slum housing in the UK, including Glasgow. The images here are from the seminal and humanistic body of work ‘A Life Worth Living’, which, like Depardon’s work, see children happily at play against the backdrop of the Govan cranes, evidence of a community spirit unthwarted by the harsh realities of life.  Shot for editorial clients, Jeremy Sutton-Hibbert’s ‘Shipbuilding’ from the mid-1990’s is a critical time capsule at the Kvaerner shipyards in Govan which catches the monumentality of this industry and the people who drove it.

The exhibition ‘Govan/Gdansk’ and the programme of events around the exhibition are organised in association with an RSE – funded research network on Regeneration and Waterfront Heritage Zones, exploring participatory approaches to waterfront regeneration in urban spaces in transition in Northern European cities. The main case studies of regeneration focus on Govan and wider Glasgow (Scotland) and Gdansk (Poland), each of which are dealing with the consequences of the post-industrial demise of the shipbuilding industry, trying to find a transition into a new economy and community.

Seminar is free and open to public. To register pls email:   by 31 May.

Alongside the exhibition we will be selling copies of Raymond Depardon’s ‘Glasgow’.
112 pages, 30x23cm, £20, and Jeremy Sutton-Hibbert’s ‘Shipbuilding on the River Clyde’ on Cafe Royal Books, £7.

4 thoughts on “Shipbuilding On The River Clyde”