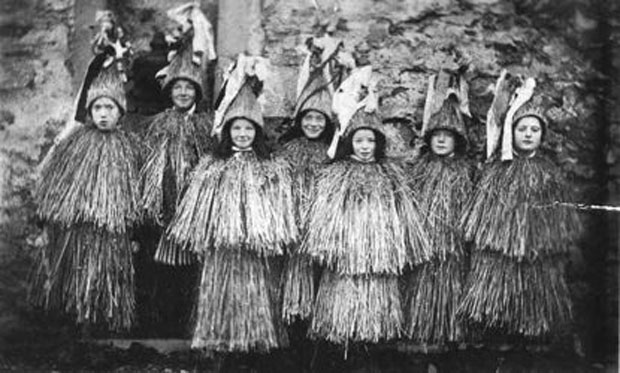 In 2013, Document Scotland were approached by Gemma Ovens, at the time a student at the City of Glasgow College, about showing her photographic work on the Skeklers, and skekling tradition from the Shetland Isles, and we felt both that the images Gemma had sent over were so interesting, so strange looking, and also that Gemma had linked to a very professionally done little Vimeo piece that her article and images deserved to be shown.

It was also interesting to us, to find out from Gemma, that no images of real Skeklers exist, or certainly none that Gemma has yet found, and that to preserve the idea of skekling, or the look of it, Gemma recreated some scenes, using local people and locally made skekler outfits. Is it documentary or not? We’re not sure, but we’re interested in it, and Gemma’s work has an appeal. So we present it here today, and hopefully you will also find it interesting, perhaps some of you may like to comment on whether you feel it is documentary in nature ?  –Jeremy Sutton-Hibbert.

‘Skeklers of Shetland’ by Gemma Ovens.

“Whilst visiting the island of Fetlar in Shetland, I stumbled across curious old photograph of straw-clad children. I was intrigued to find out more – what were they? What were they doing? With a bit of research and help from local historians, I discovered that they were ‘Skeklers’.

Skekling is an old Shetland folk tradition. A Skekler is the name for a type of disguised person dressed in a distinctive straw costume; it is a variant of the term ‘guiser’. Skeklers would go round the houses at Halloween, New Year, and turn up at weddings in small groups performing fiddle music in return for food and drink. It is believed that this fascinating custom had all but died out by 1900 and the children I had seen in the old photograph were actually part of a ‘squad’ dressed as Skeklers as part of the Up Helly ‘A festival.

In recent years, Shetlanders have been trying to revive this ancient tradition and I managed to get in touch with a local band (Fiddlers Bid) who regularly dress in Skekler outfits made by local craftsman Ewan Balfour. I borrowed these authentic costumes to recreate scenes of Skekling as there is almost no real photographic evidence. My aim for this project was to ‘resurrect’ this ritualistic custom and to create a surreal world; a fusion between the fantastic and historical documentation. I wanted to find out if there was still a place in our contemporary consciousness for Skeklers – the primordial need to adorn fancy dress and disguise ourselves. I am currently documenting a similar folk tradition – the Whittlesea Straw Bear, and hope to compile a body of work tracing the straw related, pagan and folk traditions of Great Britain and Europe.” – Gemma Ovens.