It is with great pleasure that Document Scotland has the privilege of highlighting the work of veteran photographer Larry Herman. Here we reproduce our interview with him about a specific body of work which he made in Scotland in the 1970s, entitled ‘Clydeside’. A selection of the images from the Larry Herman’s Clydeside project can be seen on our Portfolio page. 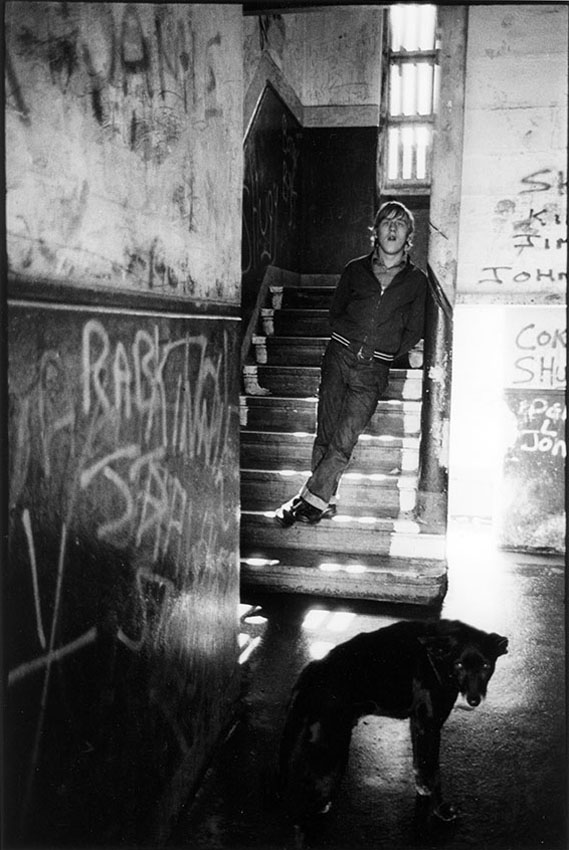 In the 1970s, New York born Larry was commissioned to come to Scotland to make work. Out of his travels came Clydeside, an intimate portrait of the region based around the river. Here, Larry explains to Document Scotland’s Colin McPherson the background to the project and what became of the photography he made.

Document Scotland: Firstly, how did you come to the Clydeside project? Was it a commission, or something you undertook of your own volition?

Larry Herman: Around 1972, I was commissioned by Penguin to work on the book, Seven Modern Poets, and went to Glasgow to photograph Edwin Morgan. We spent several days walking around together and I listened, closely, to him talking about “his” city. He was enraptured by Glasgow and, after just longer than a week with him, I was too. I spent the next couple of years finishing another independent project and immediately began raising money to return to Scotland. I started reading and aspiring to becoming an authority on the West of Scotland and returned in 1974.

DS: Over what period of time did you make the work, and when?

LH: I began preparing the Clydeside project in 1972. I actually photographed for three years starting in ’74. I then spent about a year editing. So, from beginning to end, I worked on the project for nearly six years.

DS: The photographs in the Clydeside series feature many of the iconic locations (i.e. factories, housing schemes, etc.) which still have great resonance today, 40 years on. How did you find and research the subjects featured?

LH: I don’t go to a place without a good deal of preparation. As I said earlier, I aspire to become an authority about what I photograph and spend long periods reading and filling myself with information. I still wander about in the streets or, photograph a political event like demonstrations, but when I actually begin shooting long-term projects it’s after months, perhaps a couple of years, of reading and talking to people. I begin to feel a part of what I photograph! When that happens I know I’m working well.

Within minutes of meeting someone I want to photograph, I ask them “what would you like strangers to know about you?” I listen intently to what people have to say and this anchors me in a reality that I simply wouldn’t have as a stranger. Frequently, all I do is photograph what people tell me about themselves. I actually talk more than photograph. This method of working gives my documentary photographs their credibility and authenticity. People always ask me “how do I get into situations?” and the very obvious answer is that I allow myself to be led. And naturally, where people work, the conditions there and circumstances of where they live are fundamental to all of our lives.

DS: What was your impression of Clydeside as an area, in comparison to say London or other major British conurbations?

LH: I’m attracted to places for what they are. Some, well, I couldn’t imagine living there and others are extraordinarily inviting, mysterious and provocative and suggest that if I were to spend a thousand years I would still be uncovering interesting things. Glasgow is like that for me. Its interesting because of its industrial history – one of the places where the Industrial Revolution in the world began. I liked the huge, heavy industry workplaces. I liked the way language is used. I liked the way the city physically looks. I liked where it’s situated. I liked the competition or, rather perhaps more accurately, the humour of the antagonism, even hostility, towards Edinburgh. I just liked being there! It felt right being there. 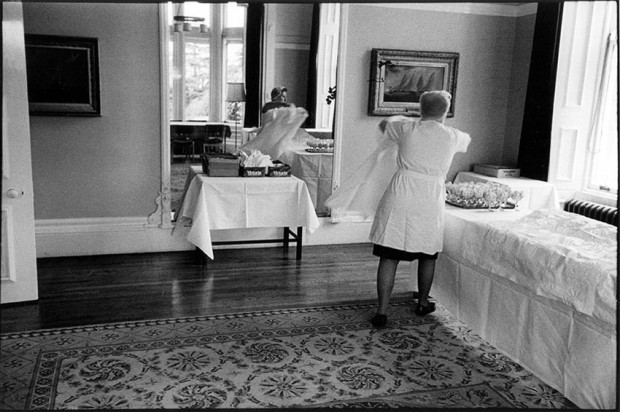 DS: Techie stuff: what camera did you use – and what film (you might not want to disclose this, some photographers are like that – but I think it’s interesting)?

LH: So do I! Of course, it’s what you do with tools, but nevertheless, it’s more information about the way I work. Over the years I’ve standardised a lot. I only use Ilford HP 5 and ID 11. I use three Leicas: M3, M2 and a MP. The MP and M2 have 35 mm 1.4 summilux lenses. The MP is the body and lens I use ninety – nine per cent of the time with the M2 as a breakdown back-up. The M3 has a 90mm 2.8 Elmarit on it. I don’t use this focal length every year, but when I need the “90” well, nothing else will do and I’ve got it in my bag. The 35 mm focal length is my standard lens.

DS: Where were the photographs seen? Were they published, exhibited. etc.?

LH: A huge exhibition, perhaps 130 photographs or so and lots of text, opened at the Centre for Contemporary Arts (the old Third Eye Centre, founded by playwright Tom McGrath), in Glasgow’s Sauchiehall Street, in 1979. The exhibition travelled around Britain and a few other countries for a few years and bits and pieces have been consistently published since. I sold an edition of the complete archive to the Scottish Trade Union Congress. Penguin came close to publishing a book of it. They assigned an editor, Neil Middleton, and we had several meetings and were about to sign a contract when Penguin founder, Alan Lane, died, the company was sold to Pearson. Neil was forced to resign and Penguin was no longer interested in working class Clydeside.

DS: Have you returned to Clydeside since? If so, what are the major changes you witnessed?

LH: I’ve visited Glasgow several times over the years, but never for an extended period. There have been huge changes, especially, for me, the Broomielaw and the heavy industries along both banks of the River Clyde, right through to Greenock, are mostly gone. I don’t lament the past, but profound industrial changes have affected neighbourhoods that built up around the docks, the shipyards and all the many places where people worked and where I photographed. Of course, many of the highly skilled trades are gone, too. For me, Glasgow is now a different place and the Glasgow I inhabited doesn’t exist.

DS: Finally, which of the images stand out as your favourite, and why has it particular resonance for you?

LH: Obviously, I don’t sell or release photographs for publication unless I like them and liking them is often a relative thing. But, that’s not what you’re asking. If someone were to ask me for my favourites – images that I consistently like then, the photograph of Ozzy in Blackhill, the two young men hanging around in Greenock, Catherine Douglass. On the other hand, that’s not a fair question and I’m not going to answer it!

Many thanks to Larry for taking the time to answer our questions. More of Larry’s work can be seen on his personal website www.larryherman.net.