On the day the Catalonian government announces it plans for independence from Spain, Stephen McLaren recounts his experiences from there in the week leading- up to the tumultuous vote. 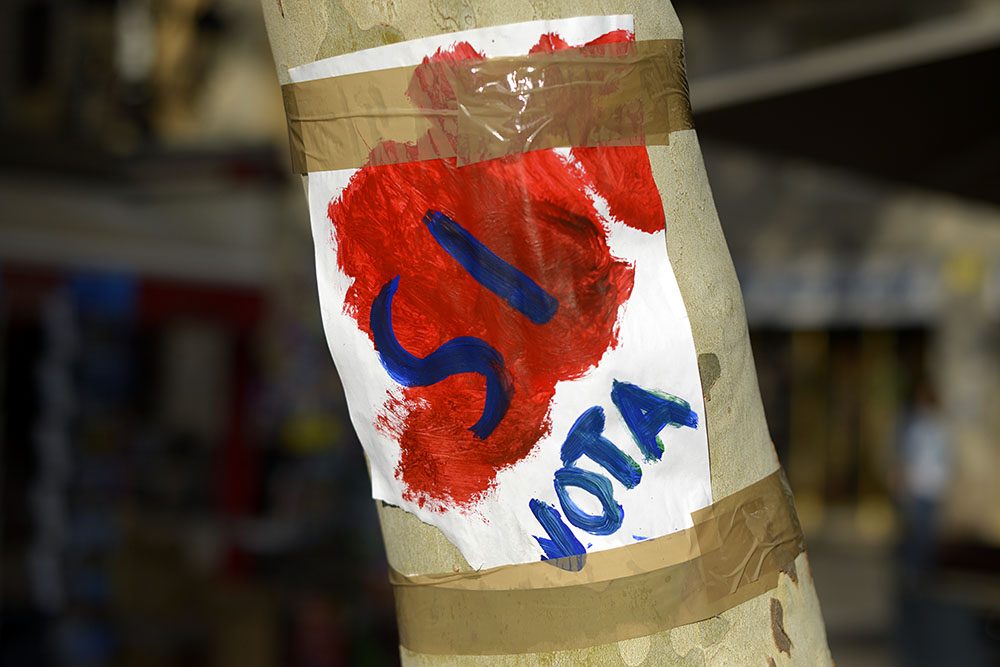 A yes sign displayed in the streets of Catalonia © Stephen McLaren 2017 all rights reserved.

I first strolled down the famous Ramblas of Barcelona in the summer of 1991. This was a year before the city would be the host for the 25th Olympic Games which would prove to be so successful in raising Barcelona’s international profile. In front of the worlds tv cameras the games were used by Barcelona’s government to revitalise its urban core and announce itself as a world class city, open to curious travellers and lovers of Modernista architecture, glorious food and new Mediterranean styles. I was one of those early Scottish visitors with pesetas in my pocket to revel in the city’s tapas bars and uber-stylish nightclubs. 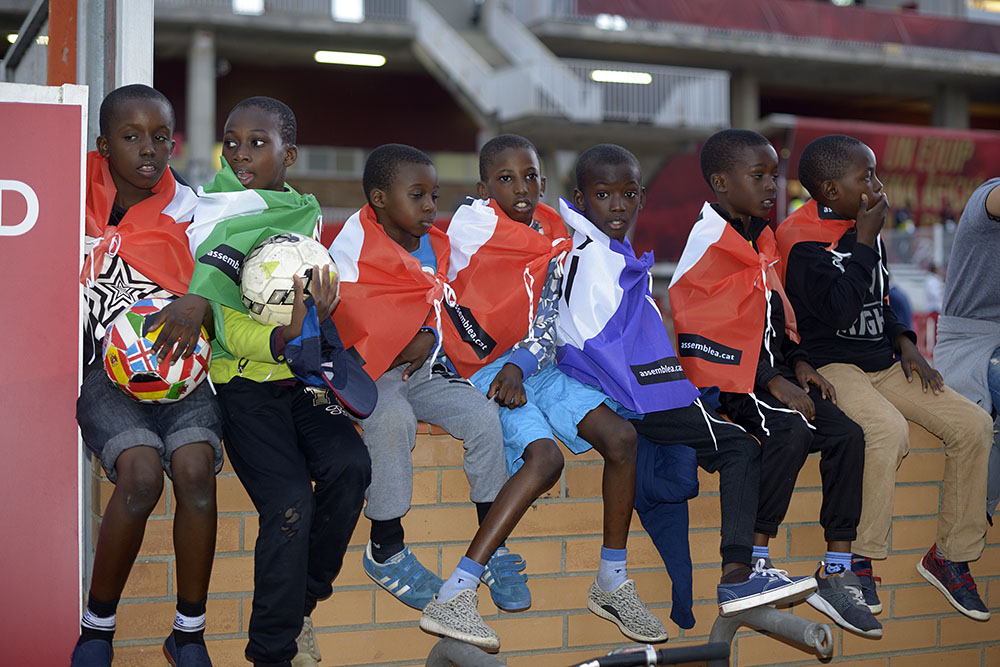 At the foot of the Ramblas graffiti scrawled on a wall announced, “Catalonia is not Spain”. This surprised my 24 year old self as I thought I had travelled to Spain’s second city and to a country which had only seven years previous freed itself from the despotism of the fascist general Franco. I had yet to read Orwell’s, “Homage to Catalonia”, his gripping first-person account of the Spanish Civil War being fought in and around Barcelona, but after reading it I realised I had been naive in coming here and expecting the locals to speak the same language as other Spaniards, and to have similar politics and traditions to the Andalucians, the Madrileños and the Basques. 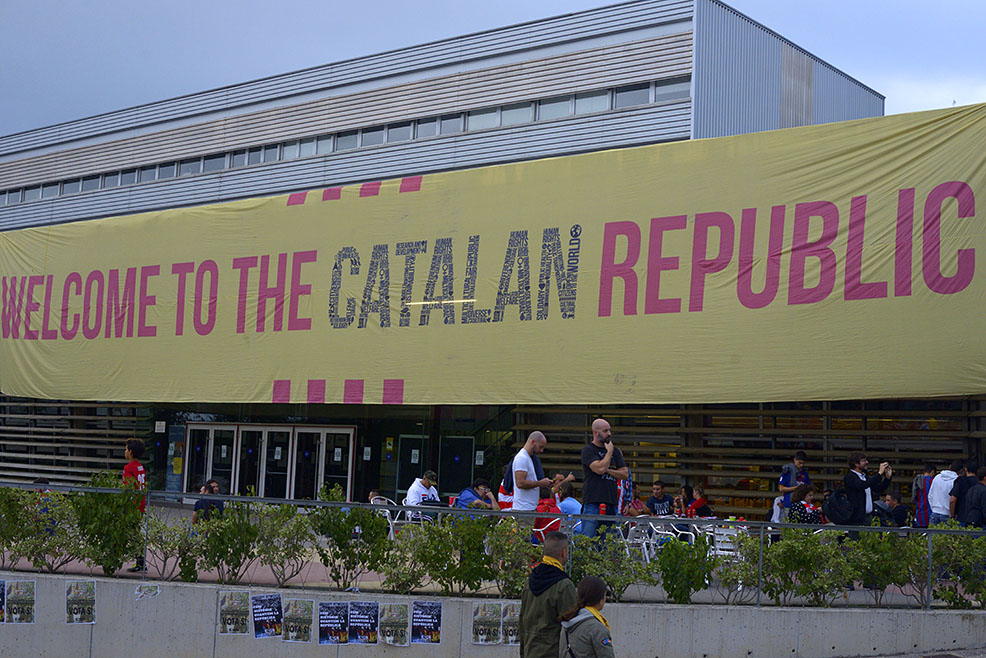 It took me a while to get it but when I did I began to appreciate that Catalonia was indeed not Spain, it was proud of being its own national entity with centuries of distinct history and cultural achievements. But in 1991 Barcelona and the wider Catalan nation was still very much ruled by the politicians in Madrid who had found their voice in the post-Franco democratic era.
A few weeks ago I found myself in Barcelona again, the twentieth-or-so time I’ve visited this magical place since my first glimpse in 1991. I arrived for a short family holiday taking in Catalonia’s other urban jewel, Girona, and the seaside town of Cadaques, only ten miles from the French border and the home of the artist, Dali, but I knew that an independence referendum was being held at the end of my week’s travels and I felt duty bound to follow the build-up this landmark event with my camera. 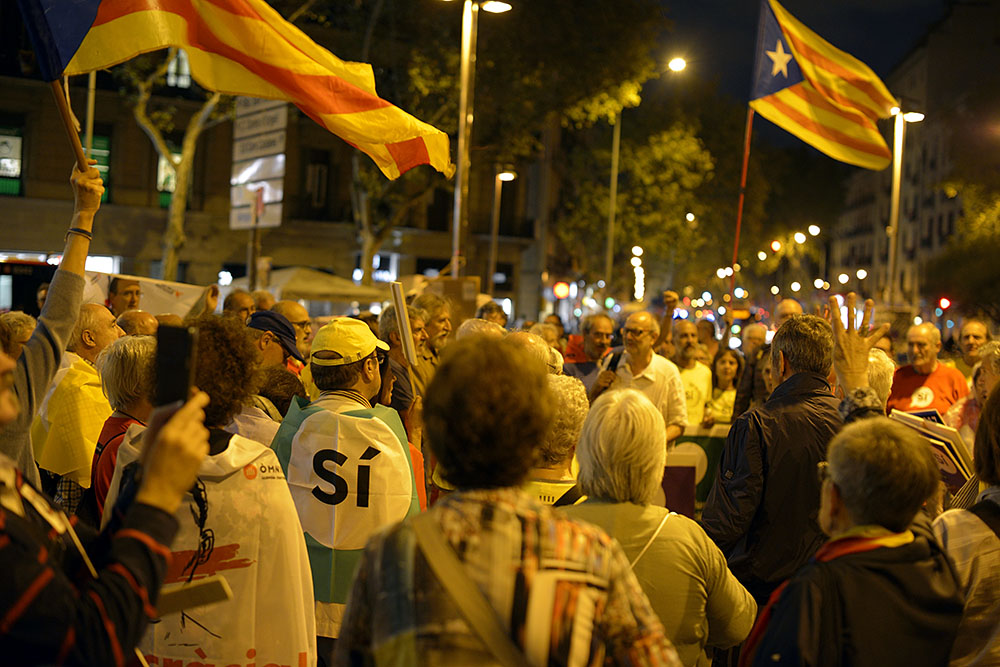 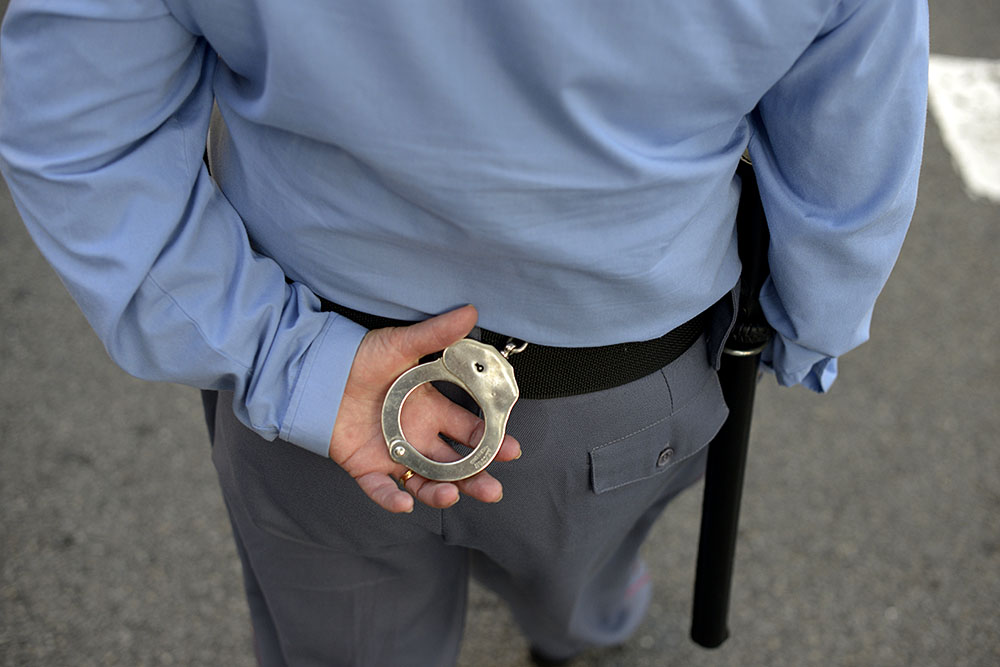 A policeman in Barcelona plays with his handcuffs during the Catalonia referendum on independence.

Having followed the ebb and flow of the 2014 independence referendum in Scotland via the competing signage of “Yes” and “No” I knew that a visual survey of posters and banners would give me an idea of the allegiances of various neighborhoods. However as I walked round the dense and fascinating barrios of Gracia, Raval, Born and Poblemou all I found was a multitude of nationalist Estelada flags and numerous Si banners in windows and public squares but nothing from the opposing camp. It quickly became obvious that those wishing to remain part of Spain were refuseniks in this campaign and were hoping that it would all just go away, perhaps by  judicial action from the Spanish state.
I left for Girona, ninety minutes up the coast, to watch a football derby between the mighty Barca and Girona FC who are always playing the plucky underdog in this fixture. The city of Girona lies at the heart of the campaign for Catalan nationhood. The politician who called the referendum, Carles Puigdemont, is a local boy and the city’s cultural calendar is full of Catalan song, dance and literature so I knew this is where I would find the heartbeat of the Si camp.

A woman in Barcelona walks past graffiti during the Catalan independence referendum © Stephen McLaren 2017 all rights reserved.

Before the match both sets of supporters mingled in front of the stadium grabbing pamphlets and  flags from a huge throng of boisterous Si campaigners. “Welcome to the Catalan Republic” said a huge sign, confusingly to me, in English. Amongst the older sets of fans, groups of young African boys whose families had been welcomed to Girona in recent years proudly wore flags supporting the Si message. I briefly contemplated the possibility of a Celtic Rangers game in which rival supporters coalesced around a similar political campaign and then laughed darkly to myself.
Barca would go onto win the game convincingly but with a week to go until the referendum was due to take place there was a tension around the game and in the city itself which I recognised from 2014 in Scotland. People seemed more focussed and self-conscious in public, the everyday activities of shopping for the dinner table and meeting friends in bars took on an intensity I found hard to convey in photographs. Politics is serious stuff but the politics of nationhood is always of a rawer and more intense variety as notions of identity and national allegiances play out in the public sphere. 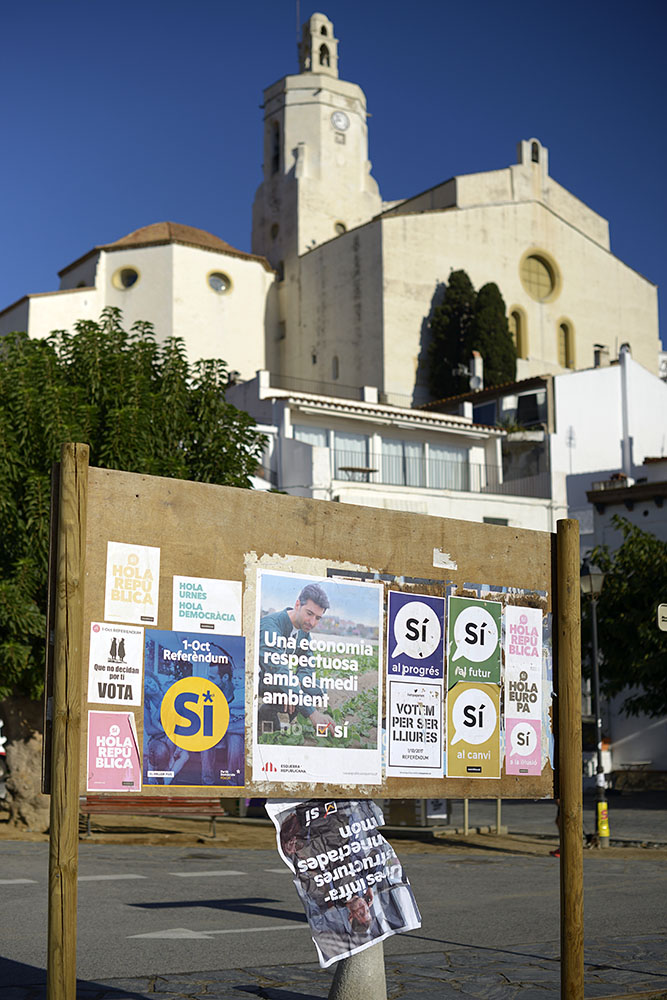 A public notice board in Cadaques, Catalonia, announcing the independence referendum © Stephen McLaren 2017 all rights reserved.

In some ways the atmosphere in Girona felt similar to that which I had felt in Dundee in 2014 when it became the city most galvanised most by the Scottish independence campaign. Catalan flags were draped around many of the apartment buildings in the city, political gatherings were raucous, and the Catalan national anthem was song lustily in the beautiful winding streets of the historic city centre. 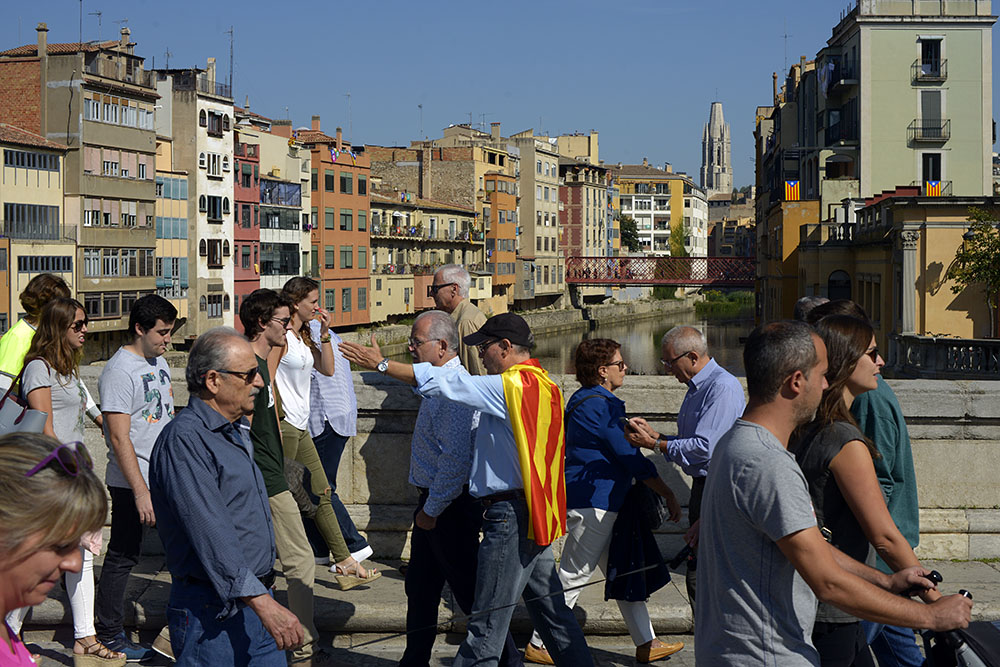 Girona in Catalonia during the independence referendum © Stephen McLaren 2017 all rights reserved.

Back in Barcelona with only three days to go until the vote, the tension was palpable. Tv news reports showed thousands of Spanish police being shipped-in on a huge ferry at the docks. Students were occupying their universities and groups of flag-wearing Si supporters could be found singing patriotic songs in the old section of the city. I watched several intense political street corner speeches invoking the democratic right to have a vote on self-governance and self-determination. 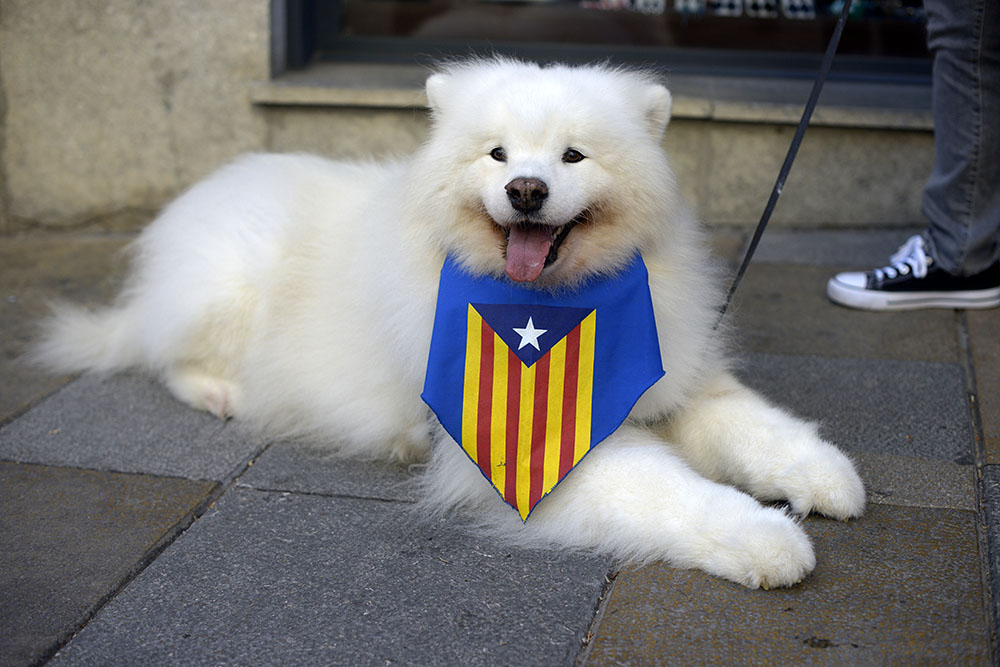 A dog with a Catalan flag during the independence referendum © Stephen McLaren 2017 all rights reserved. 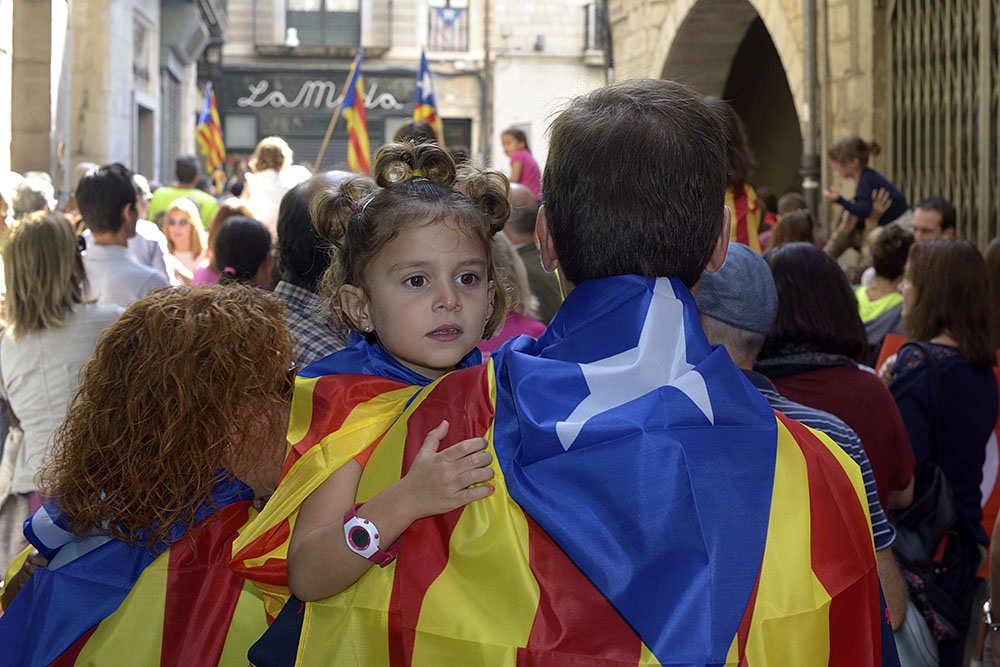 A family attending a rally for independence in Girona, Catalonia © Stephen McLaren 2017 all rights reserved.

Unlike in 2014 Scotland there was no-one with an opposing view to counter-balance the Si message and it wasn’t hard to work out that the Spanish governments refusal to acknowledge the vote would lead to widespread absenteeism from those who preferred to remain part of Spain.
My return ticket, booked for two days before the vote, meant I couldn’t be there to witness the police violence which marred the referendum itself but you tell it was coming. The Spanish PM, Rajoy was on TV bellowing his intransigence from an American visit to fellow strongman, Donald Trump. Police vans prowled much of the city centre and none of the boys in blue were cracking a smile. In the end those who wanted to vote were able to despite a clumsy and reprehensible crackdown from authorities in Madrid but a lack of international recognition remains a major stumbling block for those espousing Catalan nationhood as does the unwillingness of the opposing view to participate widely in a referendum. 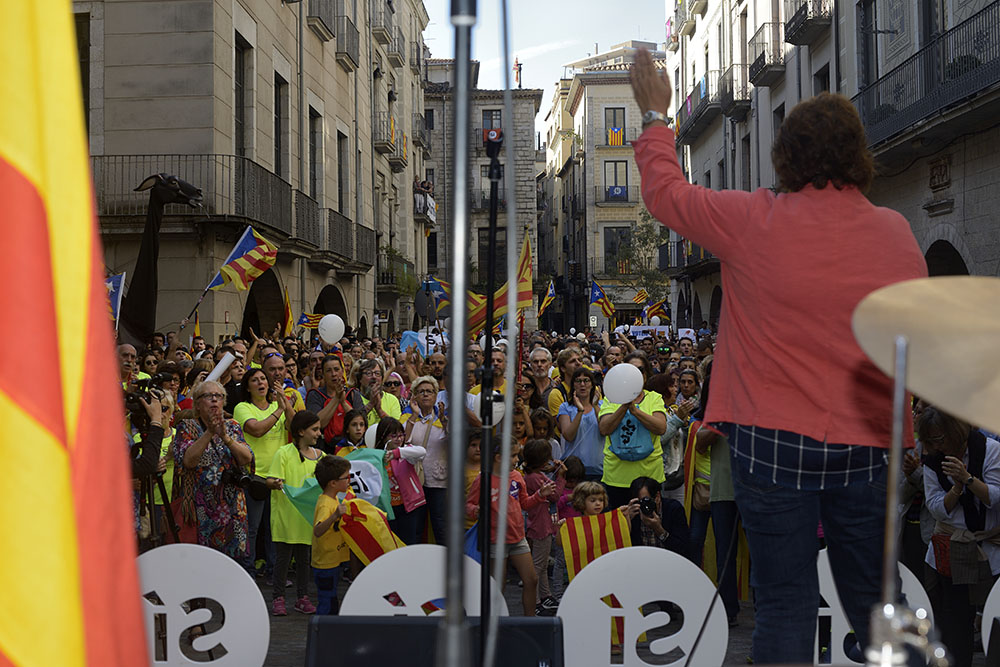 A rally for independence in Girona, Catalonia © Stephen McLaren 2017 all rights reserved.

That scrawl of graffiti on the Ramblas from 1991 which alerted me to the idea that Catalonia is not Spain is now being replaced across Barcelona with more aggressive assertions of Catalan separateness . However it remains far from certain that these demands will come to fruition in the face of a bullying state which insists on the indivisibility of Spain above all else. In the following days which will be tense and doubtlessly full of bellicose political posturing It is to be hoped that the democratic impulse and a negotiated settlement is not allowed to flounder in this most culturally rich part of Europe. 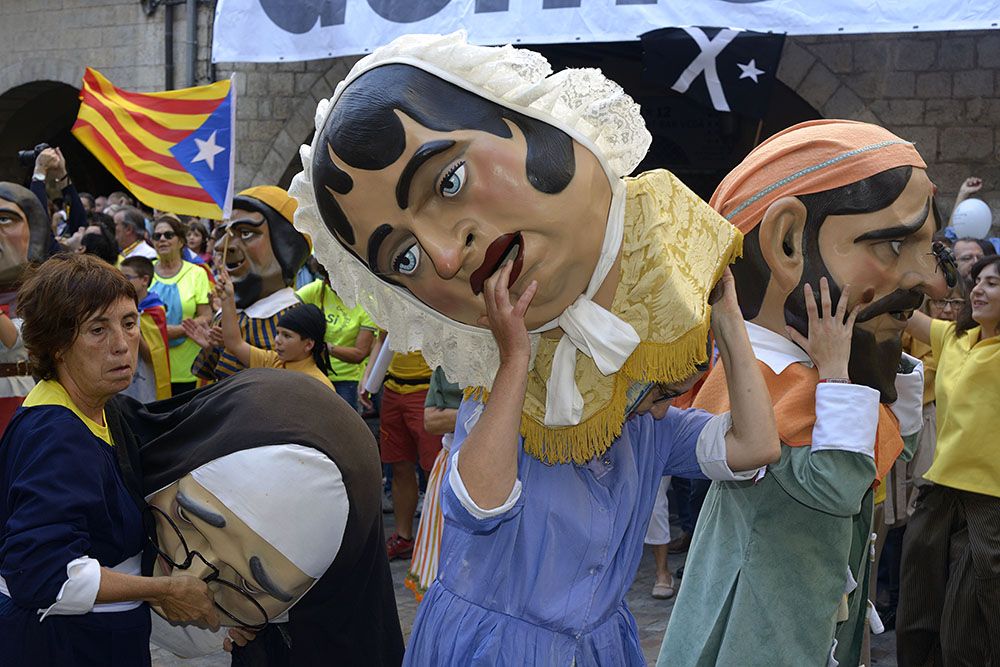 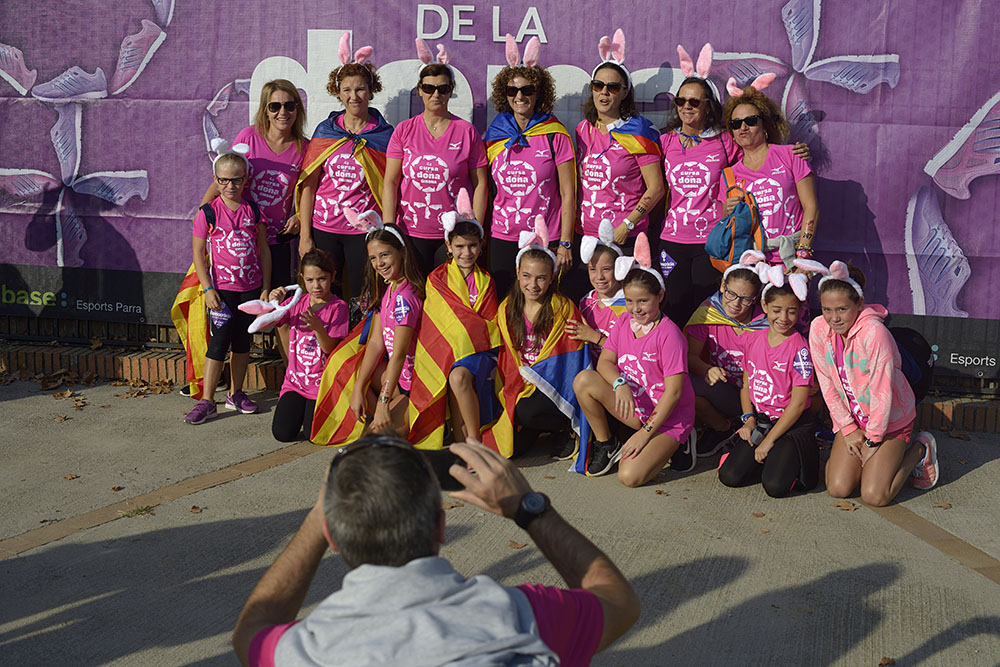