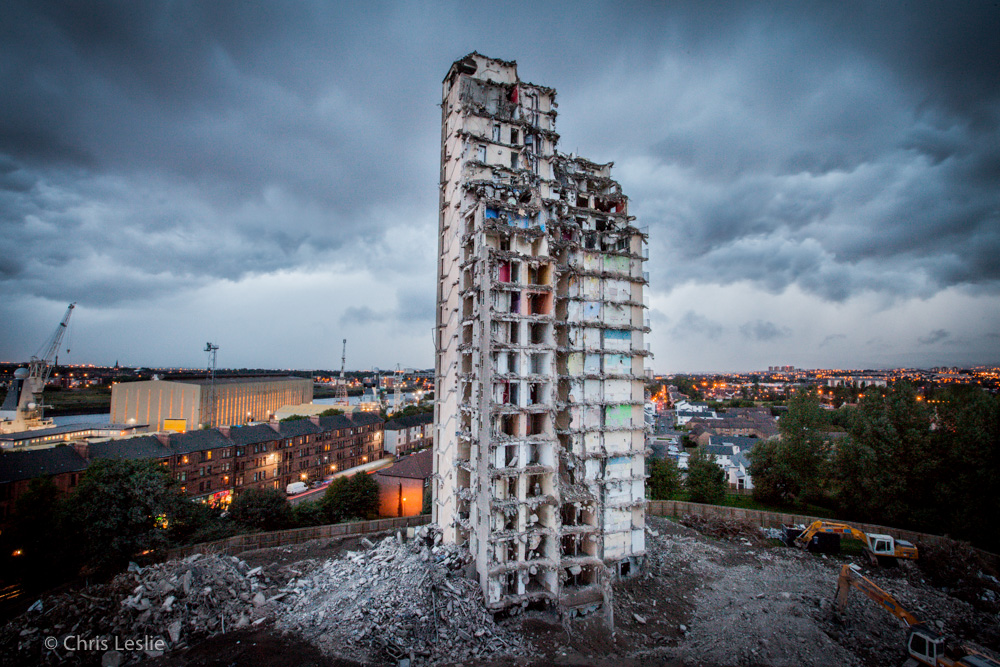 Chris Leslie is a documentary photographer and film-maker based in Glasgow. We were very pleased to feature his work at our Document Scotland Summer Salon event in August last year.

For 3 years now, Chris has been working on a long term photography and multimedia project, The Glasgow Renaissance, documenting the city of Glasgow as it undergoes a widescale regeneration project.

Currently looking for funding to support his latest piece from the project – a film called Lights Out, Chris took some time to talk to us about his dedication and commitment to the subject.

CL – This is a trailer for Lights Out – it is a film about my favourite brutalist but beautiful high rise flats in Glasgow. Both blocks are now completely empty of residents and completely sealed.


DS – This is a component piece of The Glasgow Renaissance project which you’ve been working on for 3 years now –  how did the whole project come about in the first place?

CL – The Glasgow Renaissance is a follow on for my multimedia Masters project at LCC that I completed and got a distinction for in 2010. For this I documented 4 stories on regeneration in Glasgow, from an eviction of Margaret Jaconelli in Dalmarnock to the death of Paddy’s Market, as well as the demolition of the High rise flats in Sighthill. I then got a few commissions around the Red Road Flats, which had an arts and culture project running alongside the first stage of demolition, but for the most part I documented other condemned high rise flats from my own time and expense. It wasn’t a project I had in my mind from start to finish, it just kind of evolved this way and then I started to work around the title and theme of the Glasgow Renaissance.

DS – Why did you title it The Glasgow Renaissance? Was that a term you knew of or something you created?

CL – The title of the project came from a quote from Glasgow City Council, the leader at the time, Stephen Purcell, when the city launched their plan of the mass demolition of a series of high rise flats across the city. He spoke of a ‘change in Glasgow’s Skyline’ and that Glasgow was undergoing ‘a real renaissance’. And importantly that they would not ‘repeat the same mistakes of the past’ when it came to housing. For myself and most Glaswegians we all want a Renaissance, and in particular in the east end of the city there is a desperate need.  But its important to me that you question everything that is proposed in regeneration and that for some, regeneration and a renaissance can have a negative impact on their lives.