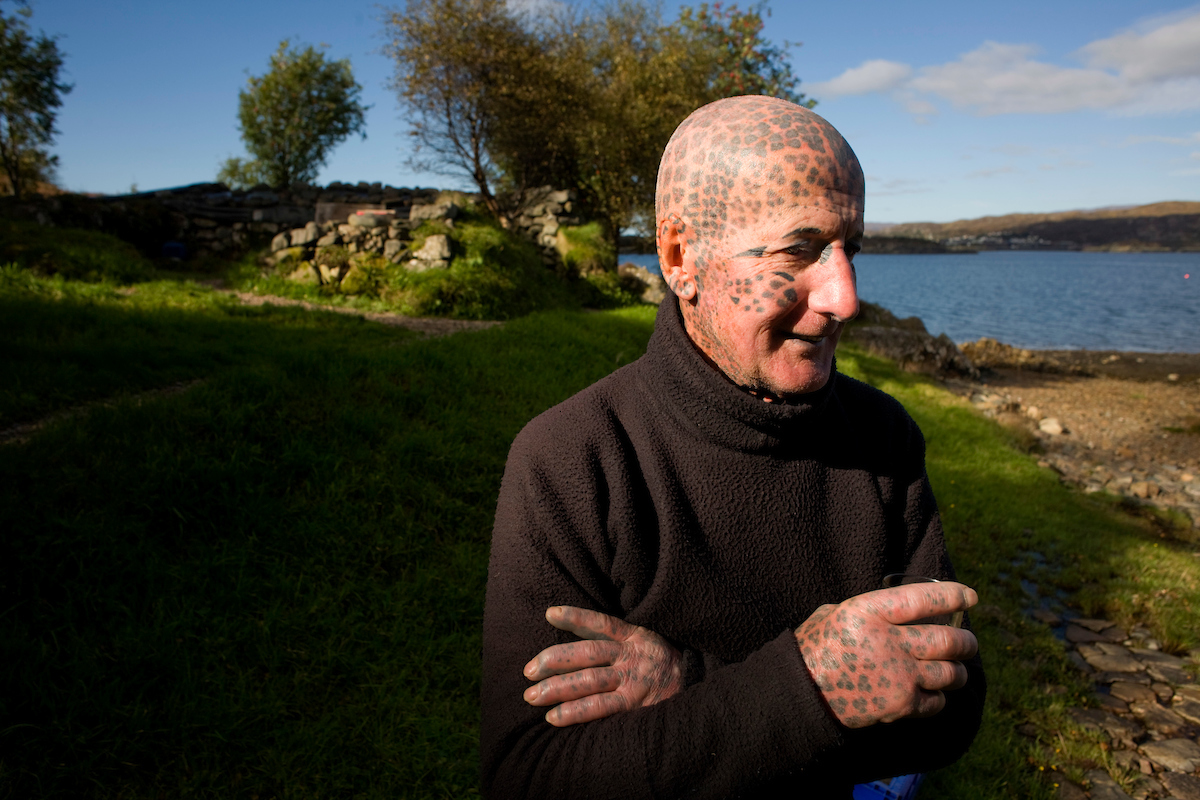 Last week, via Twitter I found this little set of images by a good friend and colleague, the London-based photographer Richard Baker. I was struck by the text and images which I thought formed a tender little portrait of both a day out as a working photographer, and also of Tom Leppard, the tattooed hermit of Skye. Within my own years as a Glasgow-based photographer working in papers and magazines I was aware of Tom Leppard, but never ever photographed him, so I was interested last week on stumbling into Richard’s pictures and text below. Kindly Richard has allowed us to share them with you, many thanks! – Jeremy Sutton-Hibbert.

In the winter of 2007, as part of a book project on the concept of Home, I was asked to travel to Scotland to visit a tattooed hermit, called Tom Leppard (then 72), who had for 22 years, been living in seclusion in a self-adapted retreat, at a secret location on the Isle of Skye.

Converting the north-facing dry-stone walls of a sheep shelter into a sunken, habitable space, he had created a roof using a blue tarpaulin weighted down by heavy rocks to stop the strong winds – a technique used throughout the Western Isles and outer Hebredes. Entering the shelter was like experiencing Shackleton’s cabin on ‘Endurance’ – every nook and cranny, crammed with the items of a survivalist and with blue tarpaulin light that gave the eerie impression of a twilight world.

Protected inside against harsh winters, he used his knowledge of survival skills learned from his career in the Royal Navy and army, to help him stay fit and largely healthy. By then however, his memory was failing and muscular ailments troubled him. Few, except trusted friends who concerned themselves with his welfare, knew his exact whereabouts and they came to check on him periodically when poor weather prevented him from crossing a 2km-wide Loch in an old canoe to pick up mail and to buy essentials. His days were spent washing, cleaning and carrying out maintenance jobs that kept his home meticulously clean.

I’d arranged with a local man to ferry me over early to meet Tom and I spent a cold day with him. The only thing that was asked of me was to not reveal where Tom lived, and to take a couple of bottles rum, a reminder of his Navy days. I remember we talked about his life there and how he coped with loneliness and isolation through dark winters. He showed me his collection of books, all carefully wrapped in plastic covers and how he carefully stored his dry food, to stop them going mouldy from damp. We warmed ourselves with a tot of rum and I photographed him going about his daily chores: fetching water, washing his clothes in freezing water, and feeding his beloved birds.

“I decided I wanted to be the biggest of something, the only one of something .. it had to be a tattoo,” said Tom. And after a few more tattoos, he at one time became recognised in the Guinness Book of World Records as the most tattooed man in the world. The idea was that I would photograph him showing off his body markings but I soon realised when I reached the island, that it was much too cold to ask him to disrobe.

At some point in the afternoon, the boat to collect me again turned up and the last I saw of Tom was a small, waving figure on the beach – a happy, smiling man on the periphery of society totally comfortable, seemingly at peace, with his own off-grid social distance.

Tom Leppard (b1935) was a remarkably resilient septuagenarian who eventually agreed to move off his island hideaway to enter local sheltered accommodation on the mainland. He passed away in 2016.