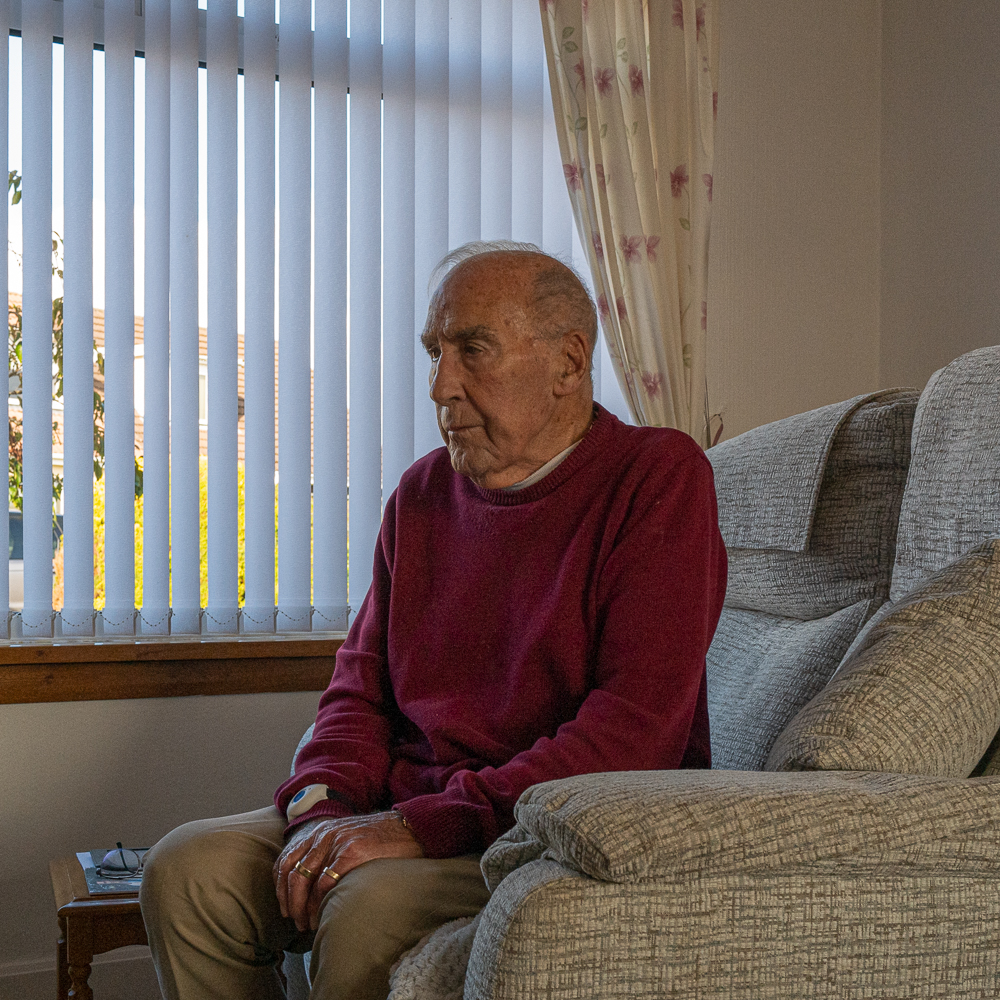 As Long As I Keep Busy, by Neil Goodwin

As Long as I Keep Busy, by photographer Neil Goodwin, is a social documentary about the lives of people living alone in the UK. Half of the project participants live in Scotland.

Living alone is a world-wide social phenomenon. In the UK, over eight million people live alone, almost 12 percent of the population, and the numbers are increasing. The main reasons for living alone are longer life expectancy and divorce. There are also challenges for people who live alone, which are not only financial but also potential loneliness, isolation, unhappiness and poor physical and mental ill health.

The documentary comprises photographs of participants in their own homes, coupled with summaries of their life stories to provide additional context. Because feelings about living alone are unrelated to age, income, education, gender and ethnicity, I sought a diverse range of participants. In my conversations, I discovered that some participants have had challenging life experiences; some have established their lives and careers whilst others are seeking to establish theirs; and some have lost their life partner whilst others are still seeking one.

The participants who experience loneliness talked about the importance of the quality, rather than the quantity, of relationships, coupled with a desire for acceptance and integration, feelings that we too often conceal. Finally, I discovered that it is important to distinguish between living alone and being alone. I met some participants who feel positive about living alone, citing advantages such as personal freedom and control, and the opportunity to refocus their lives. These participants are also included in this project.

Sammi has lived alone for nine years with her corgi, Candle, following divorce from her husband after twenty-four years of marriage. She was a stepmother who also wanted her own children, but they didn’t happen.

Sammi experiences loneliness weekly, describing it as feelings of desperation and ‘unwantedness’. The feelings can last for days but she challenges them by wild water swimming and meeting friends. For much of her life, including within her own family, she has felt an outsider and that nobody cares. A trained chef, she has not worked for three years. In 2015 she was diagnosed with complex post-traumatic stress disorder. Occasionally, she judges Cardigan Welsh corgis at dog shows and, in the past has taught for The Pony Club. Furthermore, for five years Sammi volunteered with SAGE, the domestic abuse charity because, “Whatever experiences I’ve had in life, I try to give back”.

Sammi would like a new relationship but has not sought one, saying she lacks trust because of her marital experience: “Anyone interested in a relationship with me, would really have to want to be in my life”.

Shelagh was married three times, experiencing infidelity and coercive control. She has lived alone for the past 16 years, but doesn’t feel lonely because she too busy, valuing the freedom that her life brings.

Leaving home because of an abusive stepfather, Shelagh joined the Women’s Royal Naval Service after an opportunity to go to university aged 16 was not taken up because of a lack of confidence.  Afterwards, she joined the justice system as a civilian support officer and then early retirement in 2013 led to a new career as a house sitter.

Shelagh believes she is not cut out for personal relationships, “It is better to have nobody and be happy than be unhappy living with someone.” Shelagh has a ‘can do, forward looking’ approach to life. She doesn’t spend time reflecting on the past and is at her best when responding to life’s challenges, for example when money is short.

A family rift resulted in Shelagh not talking to her only child, a son aged 45, and his children, for the past seven years. She has a few close friends but prefers not to talk to them about personal issues because she is not a sharer.

John has lived alone since his wife of fifty-seven years died three years ago. Although there are very few days when he doesn’t speak to someone he nevertheless feels lonely every day, especially during the evenings.

A retired police officer, he finds each day difficult, trying to fill the time with hum-drum activities such as shopping. He walks every day but returns to an empty house: “I cannot stand the silence, I have to have something on in the background, the TV or radio or music centre.” He has no hobbies and although he used to be an avid reader he struggles to get through a couple of chapters before losing concentration. It’s the same watching television. He attends a bereavement group and meets a group of friends weekly, as well as speaking regularly with his son and daughter on the telephone.

John and his wife were close, sitting together on the sofa to watch television, and holding hands when they were out. They were also enthusiastic travellers, holidaying abroad often. Since he’s been on his own he views the world as made for couples because he feels the odd one out when occasionally socialising. He worries about having to make decisions on his own, reflecting it’s because he’s now lacking in confidence.

Marion has lived alone since her husband of 54 years, Dave, died in 2021 after spending two years in a care home. Although her life is a routine, she is not lonely, just alone.

Marion and Dave met at university, after which Marion eventually gave up teaching work to accompany Dave in his international scientific career. After retiring, Marion established her social circle based on bridge, putting and mahjong. She says bridge is her salvation.

It is the domestic activities with Dave that Marion misses, such as gardening, and entertaining: “You don’t really know what you’re going to miss until it’s no longer there”. When she experiences negative feelings, Marion wants to be alone, working through feelings by not seeing anyone, and reading or watching TV until her mood recovers.

Marion only sees disadvantages in living alone. She acknowledges she is lucky in many ways but cannot help thinking life is unfair because her and Dave’s retirement was not realised. Marion now says she doesn’t think about the future.

Thirty-one percent of UK adults often feel alone, as though they have no one to turn to; whilst a third of UK adults will not have had a meaningful conversation in the past week. Furthermore, more than a quarter of UK adults agree that they worry something will happen to them and no one will notice. – British Red Cross, 2020

Throughout his life, Edward has suffered from depression and a fear of death, which included stays in a psychiatric hospital.

He finds the winter months worse, perhaps because of the shorter daylight hours, and he will often wake in the night feeling anxious and lonely. To combat his depression Edward ensures that he walks every day and does muscle strengthening exercises. He also eats healthily, including having his last meal of the day early so he can practice intermittent fasting. Edward’s aim is to become stronger and healthier, and as he says, “Whatever you do, you have to keep moving.” He spends time listening to the radio and reading, mainly biographies. He considers television a waste of money.

Reflecting on his life, Edward says that it is only now that he is beginning to understand himself. He has never married and following the death of his sister he has no immediate family, other than distant relations with whom he’s not in contact. Other than reading and the radio, he meets regularly with one close friend and a befriending volunteer who visits weekly.

Grazyna is overcome with feelings of loneliness and sadness on most days. She has lived alone with two chihuahuas for three years following an amicable divorce from her husband.

Grazyna does not like living alone, adding. “I’m a better person when I’m in a relationship.” She describes online dating as horrendous although she’s had two positive experiences. She values good manners and the female role of homemaker, which she knows may be considered old fashioned today. However, she would rather be on her own than compromise.

She has a small social circle and describes herself as ‘emotionally soft’. She responds to feeling sad by pulling herself together, not because she always wants to but because no one else will.

Grazyna is terrified about getting old and worries about her health. A brother died from cancer aged 47, and her mother had dementia. However, whilst Grazyna acknowledges that she’s lucky with having her own home, dogs, and friends she cannot help feeling sorry for herself.

Following the divorce, a desire to complete her higher education saw Karen relocate 400 miles, to be closer to her childhood family and she is now partway through a PhD. The relocation generated tensions with her children and repairing the relationships remains ongoing business.

Karen has learnt to live alone but experiences loneliness most evenings. She would like a new relationship but says, “I can’t just stand in the window and expect someone to walk past and be interested in me”.  She experiences a small but acute need for interacting with people. She has three close friends and has joined local walking and book groups, as well as volunteering for the RNLI, where she values being part of a team.

She sums up her feelings with a story of a car driver beeping hello to a friend, which she sees as a metaphor for the future: “I want to live somewhere where I can beep and wave to someone when I drive past them”.

A retired deep-sea diver and marine engineer, James has lived alone since his wife died in 2021 after 64 years of marriage. He cared for her at home before she moved to a hospice, and her loss has left a large hole in James’ life.

James and his wife had wanted children, but they didn’t happen. He worked internationally for a time, before returning to UK to enter management in a company manufacturing breathing apparatus. During this time, he became the first non-fireman Chairman of the Institute of Fire Engineers.

A former experienced double marathon runner, he started a keep-fit club for older people when he retired; beginning with three people it now has over fifty. However, because of poor knee joints he no longer participates and has to use a walking aid. This doesn’t stop him working in the garden or keeping active, for example getting out to meet five friends weekly.

Although he remains as active as possible, James experiences feelings of loneliness often during the evenings, and despite either watching television or reading, the feelings wash over him. However, to increase his social interaction, he recently started having weekly visits from a befriending volunteer.

Neil Goodwin came late to photography after careers in public services and leadership academia, for which he was appointed CBE in the Queen’s honours list. His photography is primarily street and social documentary; projects have included ‘Mustard Tree’, a charity for homelessness; and ‘The Other Blackpool’ about life behind the promenade of this iconic seaside town, for which he was made an Associate of the Royal Photographic Society. ‘As Long As I Keep Busy’, contributed to him being awarded an MA in Photography from Falmouth University. Neil now lives in Scotland and you can see his work at: www.neilgoodwinphoto.com

1 thought on “As Long As I Keep Busy, by Neil Goodwin”