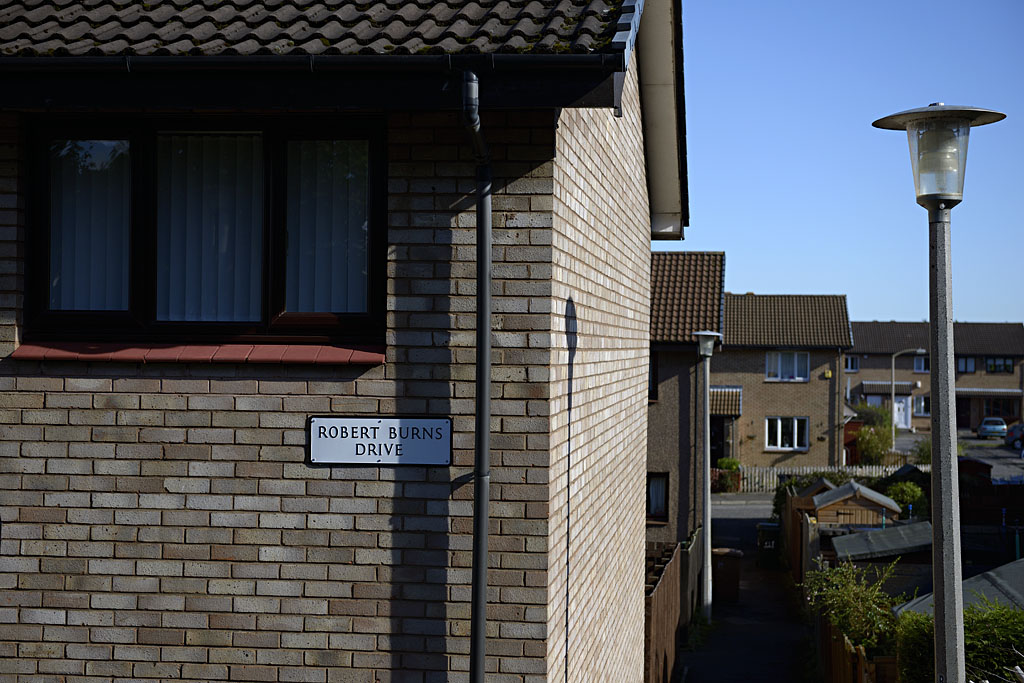 While traversing Scotland in pursuit of photographs for my long-term project, Scotia Nova, I often find myself in small, un-heralded towns looking for little moments which reveal a wider truth about modern Scotland. Towns like Shotts, Peterhead, Larbert, Wemyss Bay, solid working class towns with civic monuments and no-nonsense inhabitants.

These settlements are representative of small-town Scotland – and there are hundreds more like them – however, once there I sometimes find that  that the weather is poor, there is a lack of human presence, or photogenic subjects are in short supply. In these instances I accept the limits of being a photographer on-the-road and get ready to leave with nothing accomplished.

Recently, though, I have started to notice how many of these towns have streets named after Rabbie Burns. Many council estates built in the 1930’s have a Burns Street, Crescent, or Grove and I have found it remarkable that Burns is marked by so many towns in this way.

So I now have a side-project which keeps me going while Scotia Nova is in hibernation. I pass through as many small and medium-sized towns as I can and try and find a Burns Street to photograph.

Estates with solid council housing stock from the 1930’s are most-favoured by the name-givers at the local council. Often Burns Street/Avenue will be the main spine of the estate, and occasionally other Burns-related names will appear in nearby offshoots…. Alloway, Armour, Bard, Rose.

Burns’s popularity was probably at its highest in pre-war Scotland with every child learning Tam o ‘Shanter in school and parents going to Burns Suppers each January. However, in recent times there has been another Burns renaissance and so the Burns street name is popping-up in more middle-class and up-market housing developments. On route to Alloway last January I even came across a whole new private estate which was using Burns’s image to sell the homes.

It has been heartening for me to see that Burns continues to be remembered in the nation’s street and place-names. Of course there are many Burns statues up and down the land but for me the naming of ordinary streets after Rabbie Burns is a sign that his egalitarian and down-to-earth philosophy and poetry still strikes a significant chord in his homeland.