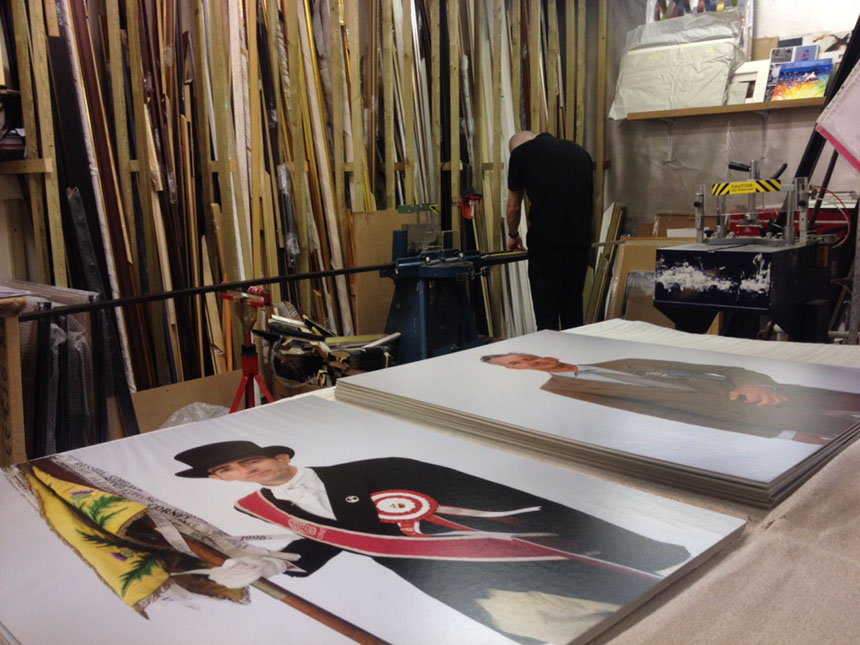 The Ties That Bind

We are less than a month away from the launch of our forthcoming exhibition at the Scottish National Portrait Gallery in Edinburgh, which opens on 26th September 2015.

Curated by the gallery’s Curator of International Photography, Anne Lyden, The Ties That Bind brings together Document Scotland’s four photographers who each present projects which have been inspired by the period of intense debate and self-examination among Scots, in the run-up to, and aftermath of the Referendum in September 2014. Each photographer – Stephen McLaren, Jeremy Sutton-Hibbert, Colin McPherson and, Sophie Gerrard – has created a body of work which considers a different strand of Scotland’s culture and heritage, and in the process explores very timely questions of personal and national identity.

For The Ties That Bind, McLaren, Sutton-Hibbert, McPherson and Gerrard have created four groups of work that consider legacy —Scotland’s role in the slave trade and sugar plantations of Jamaica in the 18th century; tradition —the centuries-old celebration of Border towns in the Common Ridings festivals; engagement —the devotion and commitment from football supporters in small towns and communities across the country; and the land itself —focusing on contemporary farming through the experiences of six women.

A Sweet Forgetting, Stephen McLaren’s project, revolves around the involvement of Scots in the sugar economy of Jamaica in the 18th and 19th centuries, which was built on the back of slave labour from Africa. McLaren spent a month in Jamaica looking for the sites of plantations owned by seven Scots men of that era, before coming back to Scotland to trace how these men spent their wealth, and what is left of this legacy today. McLaren’s photographs largely concentrate on the mansions and estates purchased with funds from the slave trade. One of the plantation owners McLaren studied was the politician and poet Robert Cunninghame Graham (1735-1797), who owned several estates in Scotland as well as a Jamaican plantation at Roaring River and made his fortune from slave plantations. A Sweet Forgetting suggests that Scotland has perhaps largely forgotten how much of its economy was dependent on slave labour in Jamaica. McLaren’s subtle, but provocative work considers Scotland’s past and how it shapes the present, as well as how we choose to remember the past.

For Unsullied and Untarnished, Jeremy Sutton-Hibbert focused on the Scottish Borders area and its traditional summer festivals, known as the Common Ridings. During the Common Ridings, riders chosen as representatives of their communities symbolically survey the boundaries of the town’s and burgh’s common lands. Participating in the yearly ritual is considered an honour for the local youths; the Common Ridings are an opportunity to represent their community by carrying the standard around the neighbouring borders of the common land, before bringing it back “unsullied and untarnished”. During the festivals, “exiles” return home to partake in events and greetings are often sent by those unable to make the journey, while bonds are re-established with neighbouring towns. Intrigued by the history of the festivals Sutton-Hibbert visited various towns, including Hawick, Selkirk and Jedburgh among others and made portraits of the riders and other participants in traditional outfits. By looking at how the history and sense of community is kept alive, Sutton-Hibbert explores traditions and their legacy in modern society.

Colin McPherson’s contribution to The Ties That Bind is entitled When Saturday Comes, after the eponymous football magazine which has commissioned McPherson over the last 10 years to photograph football culture both in Scotland and further afield. An ardent football fan himself, McPherson has used the opportunity to explore the game at all levels, although for this exhibition he has focused on lower-league football and the rituals associated with the sport; his photographs explore the sense of belonging and commitment shown by supporters, players and those charged with running clubs – from Berwick Rangers to Fraserburgh. For a lot of people football is an experience first encountered at the community level of village youth clubs and small town teams. As a weekend ritual it draws people together on the stands or grassy verges in all weather and seasons to celebrate or commiserate over the game at hand. This sense of engagement and loyalty is one that is echoed around the land every Saturday.

The fourth project in The Ties That Bind, Drawn to the Land, is Sophie Gerrard’s ongoing exploration of women in the contemporary Scottish landscape. Gerrard’s photographs offer a glimpse into the lives of six women farmers in a variety of Scottish settings (Argyll, Perthshire, the Scottish Borders, the Isle of Eigg and the Isle of Mull), and how they shape, and are shaped by, their surroundings. Working as hill farmers with responsibility for remote and diverse parts of the land, these women identify as custodians rather than as landowners, and often talk of being drawn to the hill. For Drawn to the Land, Gerrard set out to understand her own connection with the Scottish landscape, which is often seen as a symbol of national identity and nostalgia. To explore the topic she chose to focus on female farmers, often under-represented in the UK despite the number of women in farming increasing significantly in recent years. Through each of these women’s compelling stories, Drawn to the Land presents an emotional response to this country’s rugged mountains and remote lochs and islands and a wider story of Scotland’s national identity.

While the work touches on the political landscape around the Referendum, the images do not affirm any one position, but seek to portray a multiplicity of views that portray the complex challenges and subtle nuances surrounding the larger debate. Together these images create a compelling dialogue about Scotland, its people, diversity and culture, and reveal the subtle nuances that shape a nation’s identity.

Christopher Baker, Director of the Scottish National Portrait Gallery, said: “Document Scotland has impressively addressed through The Ties That Bind some key themes about belonging and history, the resonance of Scottish heritage and diversity of community life across the country today. Their work demonstrates the outstanding quality of contemporary documentary photography and its ability to provoke us to think about issues of individual and collective identity.”

Document Scotland: The Ties That Bind is part of the IPS (Institute for Photography in Scotland) 2015 Season of Photography, a series of exhibitions and events taking place across Scotland from April to September 2015. The exhibition will run until 24th April, 2016. Admission is free.

Document Scotland would like to acknowledge and thank Creative Scotland and the University of St. Andrews Library’s Special Collection for supporting the making of the work for The Ties That Bind.

2 thoughts on “The Ties That Bind”