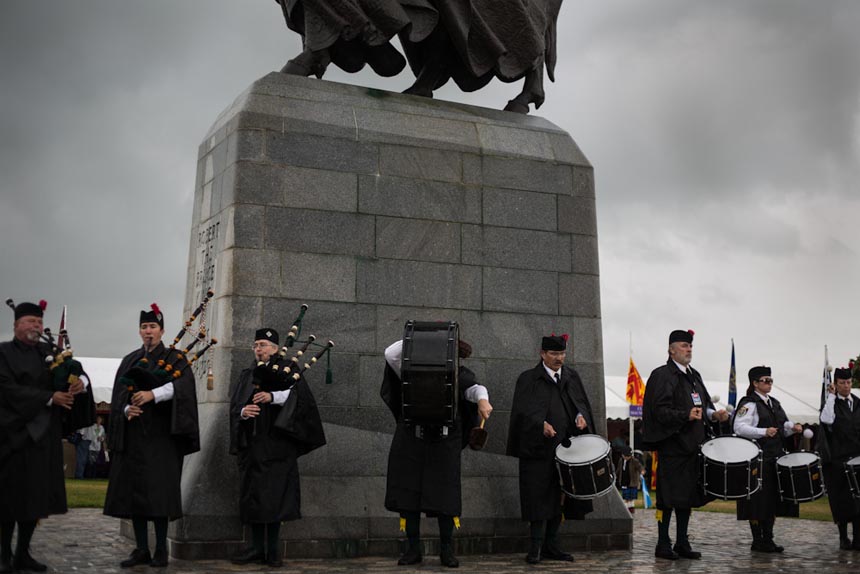 If not the quite centre of the universe, Stirling felt like the place to be in Scotland this weekend.

On Friday evening, Pipefest kicked three days of festivities, with around 1600 pipers and other musicians from around the world marching from the castle through the city’s streets. The following day, Bannockburn Live competed for attention with Armed Forces Day, the latter having been somewhat controversially arranged to coincide with the commemoration of local hero Robert the Bruce’s epic victory over the English army on a boggy field in the year 1314.

Document Scotland photographers Jeremy Sutton-Hibbert and Colin McPherson joined the throng as a sell-out crowd of 20,000 made their way to Bannockburn for two days of music, entertainment and re-enactments, the backdrop of which was to commemorate the battle and to show a bit of partizan patriotism.

The event itself reflected many aspects of Scotland: rather than a sombre commemoration honouring the dead, the tone of the re-enacted battle scenes were sometimes irreverent and inadvertently humourous. Informative, colourful and at times bloodthirsty yes, but also laced with a healthy dose of sarcasm and surrealism. Meanwhile outside the main arena, the 14th century had been lovingly recreated by an assortment of characters fashioning weapons, cooking gruel and making clothes.

With visitors from every corner of the Scottish diaspora in attendance, it took every inch of famed Scots resolve to remain cheerful despite the rain. The weather on the Saturday was more evil than medieval, but the crowds endured it, mindful no doubt that their suffering was pitiful in comparison to that of the soldiers and their families on that fateful day seven centuries ago. In the end, souvenirs were purchased, pints sunk and a few songs sung and the crowds shuffled off for another 700 years.