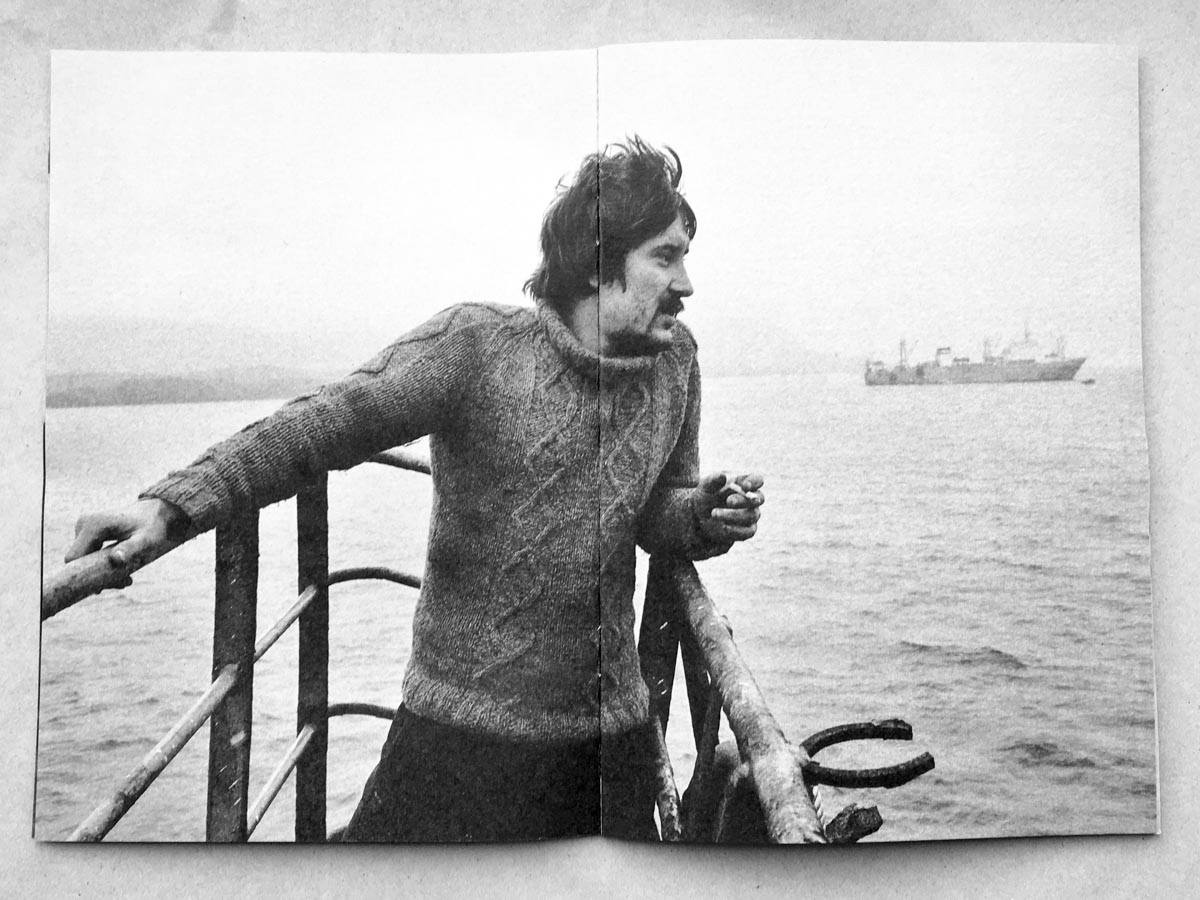 *** New just in! There’s going to be a second edition of the book printed. Another 150 are being printed to meet demands! More news soon, once they’re available ***

Jeremy Sutton-Hibbert’s fourth Café Royal Book was released last Thursday, and very nicely sold out overnight! Thank you everyone for your interest and support.

‘Klondykers in Shetland 1994‘ is the last collaboration from Jeremy and Craig Atkinson at Café Royal for this year. If you do wish to try and get your hands on one then Street Level Photoworks in Glasgow, the shop at the Scottish National Portrait Gallery, Edinburgh, and possibly Foyles in London, have limited numbers still I believe.

“There’s blue on red, red on red, green on black, and that one over there is just rust on rust”, chortled the Coast Guard helicopter pilot as we flew over the waters of the Shetland isles and looked down on the fleet of East European ‘Klondyker’ fish factory ships all moored, all awaiting the arrival of the silver fish.

It was the early 1990’s, Communism had collapsed and new economies were struggling in Eastern Europe. Ships had been sent to Scottish waters to buy up the mackerel and herring catches, and take them back frozen or tinned to feed Bulgaria, Romania and the countries of the former Soviet bloc.

But the arrival of the Klondykers as they were known was gaining unwanted attention, ships were running aground all too frequently on the rocks of Shetland, and on visits into port others were detained, deemed as being unseaworthy. With ships impounded, and without work, crews went unpaid, and the men speaking no English drifted to the garbage dumps to look for items which could be salvaged, recycled, and taken back to Eastern Europe.

I went to the Shetland twice, around 1994, to photograph, both times on assignment, badgering fish merchant agents to take me out to the ships on their speedboats when they visited to cut deals with Bulgarian skippers. Or another time I agreed with the Coast Guard to be used as ‘live practice’, to be lowered by harness and winch onto a moving ship in exchange for getting up in their helicopter to shoot aerial shots of the Klondyker fleet. I readily agreed, for the excitement, for the adventure, and for the access knowing that Colin Jacobson, then picture editor at the Independent Saturday Magazine, would never hire me a helicopter.

Cyrillic signs hung in Lerwick town centre, telling the men of the Klondykers where they could find the Fisherman’s Mission, where they could find God, cups of tea and some help, and you could spot the men as they walked the town, in their Eastern European fashions of leather jackets and jeans. Up at the garbage dump I photographed as islanders drove up to offer the Klondyker men old televisions and electronics, or just to stop by and bring them cigarettes and gifts.

Out on the ships I got lucky and found myself on a ship crewed by Romanians, and I managed to use the little Romanian language skills I’d learned while working on another project outside of Bucharest. I chatted with the ship’s doctor, and he played his accordion for me, we toured the ship, and I photographed as men and women worked, cleaning the mackerel which had just arrived, or played table tennis as they awaited more fish.

The ships have gone now, but the word Klondyker still holds resonance in the Shetland, and of course upon the rocks are the ships which never left. – Jeremy Sutton-Hibbert.