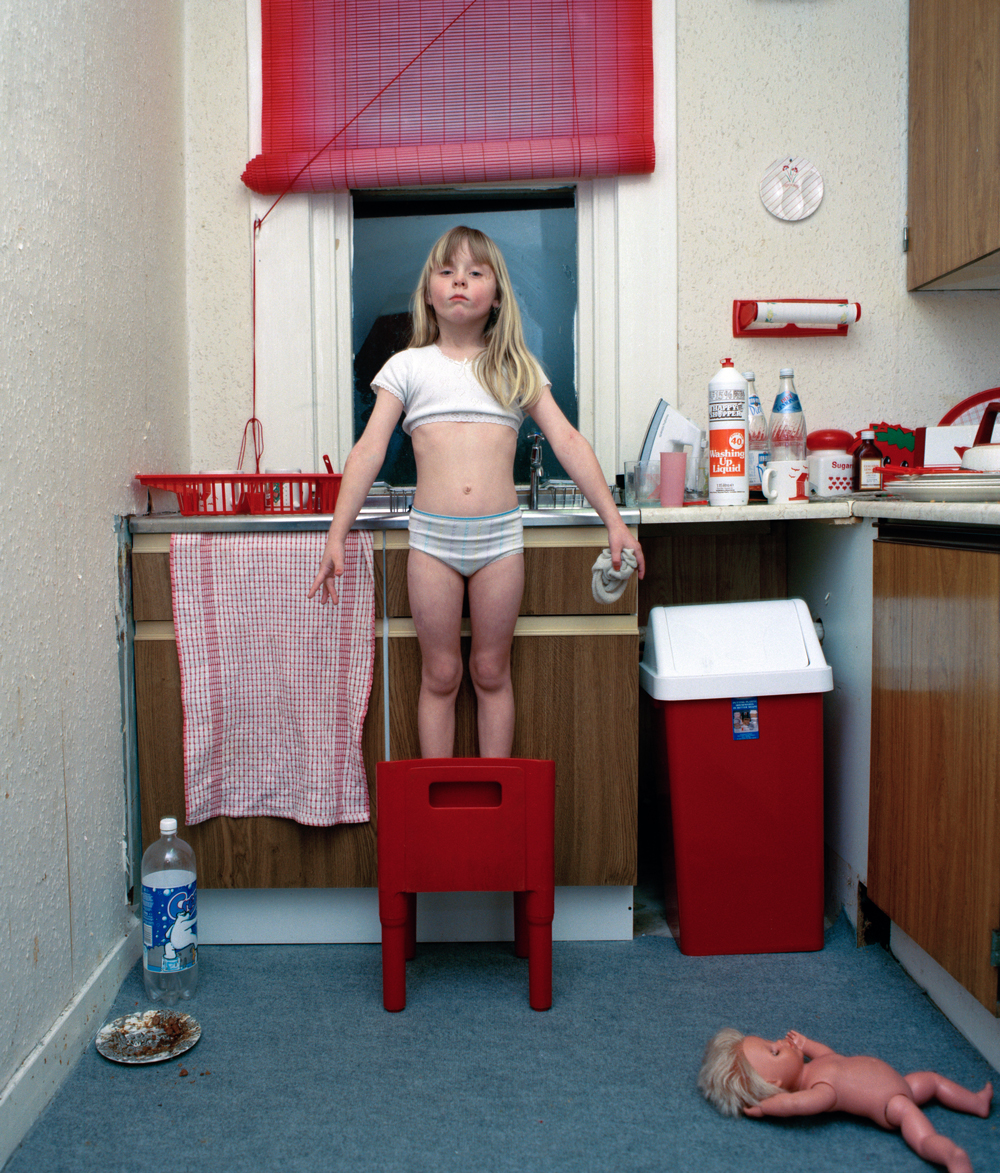 By returning to photography as both a craft and a career after an enforced period of absence due to illness,  Margaret Mitchell reminds us that personal visions remain across decades.

In the 1990s Margaret Mitchell was a successful photographer and lecturer living in Edinburgh. She had graduated from Napier and was working on commissions, residencies and exhibitions for over a decade before an ear condition started to cause her to lose balance. Using a waist-level viewfinder on projects, such as the long-term one, about her extended family living in Stirling, often became a real problem as dizzyness made composing portraits a problem and ultimately she was forced to give up her photography for over a decade. Thankfully her sense of balance has returned but it is only in the last few years that  that she has been able to resume working in the medium that she loved.

“In the past few years I’ve come back to photography and tried to re-establish myself and I’m back to promoting my work which has changed quite a bit since the 90s when I was doing it originally. I’ve had a portrait included in the Taylor Wessing  prize which was a good boost and now I’m back working on personal projects which have lain dormant for quite a few years. I have a ten year old son who have to work around and I also do workshops for community arts practises and galleries like Street Level in Glasgow. My overarching interest lies in people and their stories, with childhood, youth, place and belonging often explored in the people and places photographed.”

Mitchell’s photography is largely portrait-based and often involves a large degree of collaboration or input from her subjects.

“I’ve always been interest in how people are represented by photography. I remember showing fellow students some pictures I’d taken of my brother’s children in their bedroom in Stirling and someone asked if it was taken in a Romanian orphanage.  I was ashamed and angry but then I realised the power of photography and that a strong image might necessarily not have been the most truthful. So now I am always keen that my subjects have a voice in the photographs and I am always looking for ways to let them contribute to the final image and presentation.”

One of Mitchell’s earliest personal projects called “Family”, revolved around her extend family living in a run-down housing scheme in Stirling. The portraits of her nieces and nephews are sensitive takes on the complex and by-the-minute lives that children live.  Sometimes they look resilient and full of confidence, at other times they look unsure of their futures and lost in a train of thought.

“The project was part of a larger piece of work, which was looking at issues around identity and stigma. I asked if I could photograph my sister as she was a single parent and I was acutely aware of the stigma, stereotypes, and prejudices surrounding her daily experiences at that time. I thought I would photograph the world of the children in her family and show that it was just like any other – perhaps even better. I felt a pride in my sister, in who and what she was.

As I photographed, I began to realise that the children had this fantastic inner and interconnected world. That they existed within this cocoon of support for and from one another. That all experience was interdependent on the other, that their mother was really only there on the periphery – to feed and to clothe and to wash – but that their actual lives were fundamentally lived with and for one another. Rather than a story on my sister and her experience, the 1994 work became a story on children and their childhood world that I had a glimpse into.

At the time, I thought it not important that this was part of my own extended family yet by calling it ‘Family’, I still wanted to claim the photographs whilst leaving it open to interpretation. My sister is dead now but her children are adults with their own children and their own families. So the family renews. It endures.”

Back in the mid 90s Mitchell didn’t exhibit or publish “Family” but she recognises that her way of working on that project has influenced much of her recent work.

“I see how the work pushed its concepts onto much of what I do. For example, a current project looks at the inner worlds of children, something that fundamentally this early work laid the roots for. Another recent project The Guisers also looks at these child worlds that we as adults are excluded from, scratching the surface and asking children why they make the choices that they do. In this context, ideas within current work certainly developed from those discovered within the Family documentary in 1994.”

Photographers photographing their own families has of late become a genre of it’s own, so much so that when compiling a book of these projects entitled, “Family Photography Now”, I had more amazing work to consider that could have ever fitted into any one book. Photographers like Larry Sultan, Nicholas Nixon and Sally Mann have shown us what incredibly complex and honest records of family intimacy are possible with the right photographer and willing kinfolk. Mitchell obviously had a strong body of work from 1994 but might she have felt that it was un-finished business?

“I have photographed my large, extended family over the years but not in any sustained, intentional manner. But I had an itch that kept at me, wanting to go back to this project from 1994. To return as a photographer and see if there was a wider story there apart from one of childhood worlds. To catch up with the children of 1994 and see where their lives – and perhaps more so that of their own children – had and were taking them.

And so Mitchell has returned to Stirling these last few years to re-introduce herself to her extended family and make a document of their lives and the place they live in now. The project, “In This Place” is ongoing but shows that the photographer has built-upon her 1994 project with additional themes and concerns.

“My sister had died in 2008 and I felt a growing disconnection, especially from her grandchildren that I wanted to repair. Photography has allowed me into so many peoples’ lives so perhaps it is what I turn to – it is the excuse, the reason, and the justification to be there in a sense. Or at least a possibility, an entry point to grow from.”

Mitchell’s family have moved in the intervening period from the Raploch to another housing estate in Stirling, pockets of which remain amongst the most deprived in Scotland. From looking at the photographs from, “In This Place”, it is hard to ignore that issues of poverty, urban re-generation, and social exclusion, are also being examined alongside the lives of her relatives.

“Fundamentally it is a story of people and place, of people’s lives: what they do and what they want. Behind the fact of my own personal connection sits a larger narrative of social mobility and environment. It is essentially about choice – do we have choices in life or are some predetermined to an extent and made for us? So the ‘place’ is both mental and physical, where we put ourselves and where we are put, sometimes by others and sometimes by circumstance. What puts us there, what keeps us there, and do we want to be there? These are really the central questions I am looking at.”

“There is a process to In This Place where I am ever mindful to the who, how and what I am photographing and the potential reading by others of that. In my work, I am acutely aware of representation and the power in photography. I want this power to be shared, that work becomes collaborative, or as collaborative as is possible. This process makes working on In This Place a longer project time wise, which I think is ultimately a good thing for this particular work. It gives me the space to reflect on how I am approaching the story, if it is the right message and to know that those involved are active in their own representation.”

Mitchell seems thrilled to be back working in photography and especially enjoys the social connections that can be made on platforms like Instagram.

“There is a sense of empowerment and collaboration that makes photography a less lonely place than it used to be. As someone who built my own website from scratch I’ve always been keen for photographers to use these new tools. So I’m using Instagram to show bits of the archive as well as the new work and am really enjoying getting into conversations with people online about these pictures.”

Mitchell’s project, “In This Place”, is an exemplary body of work that balances domestic intimacy with a keen sense of the wider issues which modern Scotland is still wrangling with. Some photographs from the series will be included at a show at an up-coming exhibition at The Women’s Library in Glasgow in March and also at ‘Ambit – Photographies from Scotland’ ( at Street Level Photoworks from 22nd April to 18th June 2017. ‘When the Light Shifts’   6 March – 1st April http://womenslibrary.org.uk/event/when-the-light-shifts/

There may also be an interim newsprint publication which will present the work in both image and text. Check out more of Margaret’s work at…http://www.margaretmitchell.co.uk