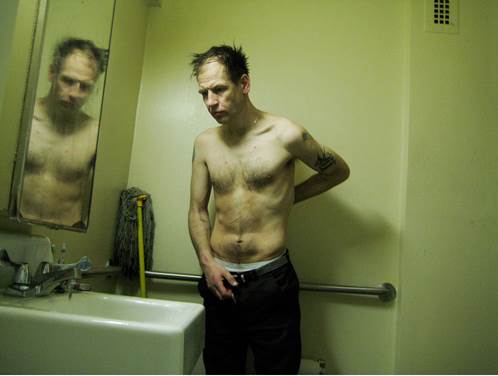 A compelling and powerful series of photographs that document an acclaimed Scottish photographer’s devastating descent into drug addiction are to be given an exclusive first public showing this spring at the Scottish National Portrait Gallery (SNPG).

These hugely original photographs intimately record MacIndoe’s downward trajectory from professional photographer with a flourishing career to struggling opiate addict, a journey of anguish and isolation that was to culminate in an arrest for drug possession and a four-month stint in New York’s notorious Riker’s Island prison and five months in an American immigration detention centre before he got clean.

The images both powerfully confront the perilous destructiveness of addiction and explore the genre of self-portraiture in a way unrivalled in the photographic medium.

Graham MacIndoe studied painting at Edinburgh College of Art and received a Masters degree in photography at the Royal College of Art in London, before moving to New York in 1992 where he later pursued a career as a professional photographer. His work began to appear in some of the world’s leading publications, including The New York Times and The Guardian.

MacIndoe’s success led him to take portraits of the most recognisable people in the world, from Hollywood actors and authors to international artists and pop stars. However, he began to use alcohol and drugs in part to mitigate the stress arising from this demanding lifestyle, and also upheaval in his personal life, but his heroin habit gradually overtook everything that once mattered.

MacIndoe has now been clean for seven years, largely thanks to an innovative prison rehab program, what he describes as “a compassionate judge” and the support of his partner Susan Stellin, a reporter with whom he co-wrote Chancers: Addiction, Prison, Recovery, Love: One Couple’s Memoir, published by Random House in June 2016.

The recovery has seen MacIndoe prosper again, as a working photographer and as adjunct professor of photography at Parsons The New School in New York City, while he and Stellin were awarded a 2014 Alicia Patterson Foundation Fellowship for a project about deportation. In addition to being represented in the National Galleries of Scotland collection, his photographs also reside in the collections of The New York Public Library, The British Council, The V&A Museum, The Museum of Fine Arts, St Petersburg, Florida and The National Media Museum, Bradford.

While other photographers have shown the excesses of drug-taking in graphic detail before, the position usually adopted has been one of voyeur; not of subject. In MacIndoe’s case, his images do not show an individual exploited for a mass audience, so the power and control rests firmly with himself, and never before has a photographer captured addiction with such subjective honesty and rigour from the inside. This produced body of work is not only truly ground-breaking in its content, but in fact requires a certain degree of courage in viewing.

Coming Clean’s images are a result of a powerful interdependence between MacIndoe’s strong compulsions, the drive to capture the consequences of his addiction, and of his dexterous ability to do so.

The photographer hoped to avoid glamorising what had become “a solitary existence, the monotonous repetition of an addict’s daily life. I turned the camera on myself because I wanted to photograph addiction from the inside – a perspective most people never see”.

He admits that, “even in that haziness of addiction I was thinking like a photographer… how these pictures would be perceived”, and throughout this, his photographer’s eye remained keen and strong, even if everything else did not.

In their use of light, composition and ambiance, this eye emanates through Coming Clean’s images. Using basic digital cameras with self-timers, MacIndoe recorded himself while engaging in his personal drug rituals. His skilful use of light and shadow created a series of haunting self-portraits that reveal the squalor and stark reality of addiction.

Almost all the photographs are set within the small and limiting confines of his flat in Brooklyn. There is little connection with or evidence of the outside world and the few views of the city outside recorded from the window only seem to reinforce the isolating and claustrophobic existence. The only figure to appear in the scenes is MacIndoe himself, whose ghost-like presence is often exaggerated through the piercing light. In one portrait he is photographed against a window—turning his back literally and figuratively on the outside world—and the strong backlight has effectively distorted his body so that his head appears to float up and away.

Though no image, perhaps, is as symbolic of Coming Clean as that in which a clearly incapacitated MacIndoe rests his head on a seat, the evidence of a recent heroin injection in his contorted face and blood trickling from his forearm. Not only does MacIndoe, albeit inadvertently, frame the whole shot with his outstretched hand, but in his final action before descending into unconsciousness leaves the viewer with the understanding that amid the chaos, what he had been reaching out for was is the one thing he’d been left with any discernible control over; his camera.

Graham MacIndoe said: “It is a great honour to have the first showing of this body of work at the Scottish National Portrait Gallery. Although the images were taken during a difficult time, I am grateful to have made it through that period and hope this series shows that recovery is possible even from the depths of serious addiction. I never anticipated that these photographs would find a place in the national collection, so I’m especially excited for the opportunity to exhibit them in the city where I first discovered photography”.

Annie Lyden, International Photography Curator at the Scottish National Portrait Gallery, said: “These photographs offer a rare insight into a very real aspect of the human condition. Graham’s honesty and courage in documenting this particular moment of his life allows us to see the rawness and isolation of addiction from the inside. The images are powerful and are at times upsetting, but you will not find a more candid and revealing series of self-portraits than Graham MacIndoe’s Coming Clean photographs.”