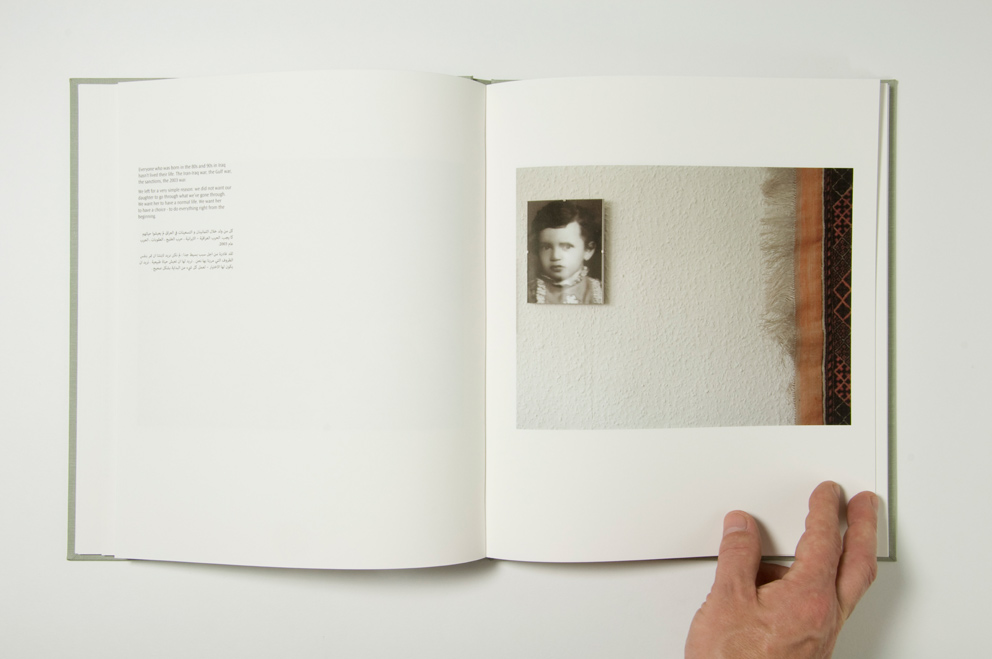 Today here on Document Scotland we post a portfolio of Sarah Amy Fishlock’s ‘Middlemen’ series, work examining the lives of former Iraqi translators working for the British Governement and army in Iraq. We caught up with Sarah and she kindly agreed to answer some questions about her project via email:

DS- What made you take on this project, how did it come about ?

SF- I was interested in documenting the lives of people from the Middle East who have settled in Glasgow. I spent a few months researching and trying to make contacts, with limited success. As it turned out, the Scottish Middle Eastern Council were receptive to my ideas and helped put me in touch with three men who had worked with the British forces and government in Iraq, and who were now settled in Glasgow under the Locally Engaged Staff Assistance Scheme. My project then evolved into a portrait of these three families and their new lives in the UK.

DS- How difficult was it to gain the access to the people you’ve photographed, and what was their reaction to your request to show a little of their lives ?

SF- Once I had built up a rapport with SMEC, they passed on the email addresses of the three men, who had agreed to meet with me to discuss the project. I then met with the families individually to present my ideas and discuss how we might tell their stories without revealing their identities. All three men and their families were incredibly accommodating and enthusiastic about the project. I see ‘Middlemen’ as a collaborative project between myself and the three families: the images were born out of an ongoing discussion about the best way to present the stories while still preserving the subjects’ anonymity. One of the men is a calligrapher and helped me with the beautiful cover for my book, while another translated my interviews into Arabic for inclusion in the book. So I think it was also a way for them to tell their stories, and I hope that taking part in the project was useful in helping them to process their experiences.

DS- Was it difficult to build their trust, how did you go about this ?

SF- I had done a lot of research into Iraq’s history and customs beforehand: i think it’s really important to have a solid understanding of your subject, especially if your project involves a culture that you are unfamiliar with. I began by explaining why I wanted to do this project and what it would entail, as well as setting boundaries with my subjects so that I was completely certain of what I could and couldn’t photograph.  I then interviewed my subjects to gain background knowledge: I did this by asking general questions which then often led to specific recollections. My attitude to interviews is pretty straightforward: I research, prepare well, and turn up on time! I think most people will give you the time of day, if you show that you respect their time and attention.

DS- How long have you been working on the series, it is finished, or do you envisage adding to the work ?

SF- ‘Middlemen’ took about 9 months to complete – I see it as a finished body of work, although I am still in contact with my subjects and would consider revisiting the project in the future. I feel that it’s a very intimate body of work that encapsulates a moment in time: three families starting their new lives in an unfamiliar country. I don’t know if it needs to be added to.

DS- has the work been exhibited or published, or are there future plans for it to be shown or published ?

SF- The work was shown in the Scottish Parliament in 2011, and the Lighthouse, Glasgow and V&A London in 2012.

DS- Many thanks Sarah, best of luck with your work, and thanks for sharing it here with us.
See further work photographic work by Sarah Amy Fishlock, and send her a note on Twitter @SarahFishlock.