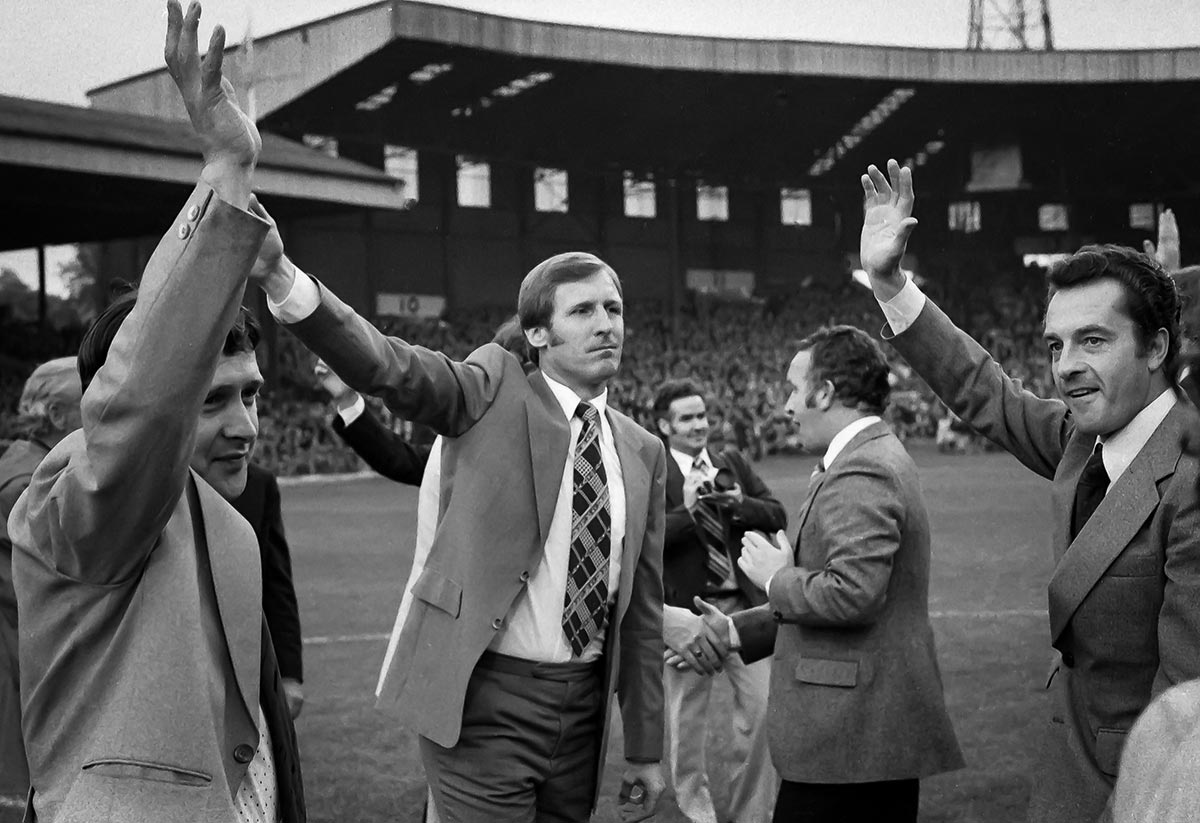 Trying to keep up to date with the current tumultuous news of life on Twitter it’s heartening to scroll to a Tweet which shows images and catches your eyes. Such has been the way this past week or so when I’ve discovered two photographers posting old images of Glasgow and beyond.  I dropped them both a note, and now have the pleasure of sharing some of their work and a few Q&A’s with them, over the coming days. Hope you enjoy them.

Today we start with the lovely work of Peter Degnan. I look at his images of the Jock Stein testimonial and get jealous; his image of the Granary building bring back memories of myself being on top of it photographing ship launches; and the whelk shop in the Barras, a place I was discussing with someone just recently… Great to see Peter, thank you for sharing it all. – Jeremy Sutton-Hibbert.

Peter introduces himself on his website with these words:

I have been involved with photography seriously since about 1976 when I bought my first SLR camera, a Russian “Zenith E” with a 50mm lens. I became involved with camera clubs in the early days and although I enjoyed my time in them socially, the competitive and prescriptive nature of them was not always to my liking.

I was predominantly shooting in black and white and processing and printing all my own work at this time.

I am self-taught in both my photography taking and processing and printing and I was fortunate enough to always have a darkroom at home, so more often than not I could be found in there working on new projects. Although I did not set out to profit from my work I did manage to sell a few images following a small exhibition of my work in The Paisley Arts Centre.

Around the late 1990’s until about 2002 I took a break from working at the level I had been for a number of reasons. Firstly I had a major move of jobs and living location, secondly the kids were growing up and finally the dawn of digital photography was starting to take a hold and I was watching with interest.

Although I still had my film cameras and lenses, my first digital camera was to be a Fujifilm Finepix. I was basically dabbling with digital until such time as I switched from Windows computers and bought an iMac and simultaneously took out an Adobe subscription to Lightroom and Photoshop and this gave me the encouragement to start back where I had left off.

Up until about 2012 my taste in photography was wide ranging and included taking landscape, portraits and transport photographs. My passion however is documentary and street photography. I have always endeavoured to record as I was going about my photography and still do to this day. Although street photography can take many forms, it is the documentary element that interests me most. In 2019 I produced my first photo-book entitled “Mother Glasgow” and some of the images it contains can be seen in my My Galleries. This was followed up with a Zine version and both of these can be purchased using the Publications like above.

In 2019, in order for me to try and progress with my documentary/street photography, I decided to end my association with Nikon equipment and purchase a Fujifilm 100X-F camera which is my first mirror-less camera and I am enjoying using it as it is so discrete on the streets. I have recently supplemented this with the purchase of the excellent Fujifilm X-T3 and some lenses.

Document Scotland – Roughly what period did you shoot these b/ws?

Peter Degnan – All of the photographs were produced between the mid 1970s and the late 80s. It was a very interesting time for Glasgow with lots of changes going on. It was also back in the film era and one regret I have is that I didn’t take more. I have resisted going public with a lot of the images because leaving a gap of over 40 years since I took them makes the contrast in people and places more noticeable.

What was the motivation behind you going out on the streets looking for images, and for attending events such as the Jock Stein testimonial?

From the outset my photography style has always been of the documentary/photojournalistic style. It wasn’t a conscious decision it was just something I felt comfortable doing and always had a fascination for old photographs that recorded life. I was always on the lookout for events. The Jock Stein Testimonial I knew would be a huge event given the love the support had for him so I was determined to get in on that. I have also taken pictures at political rallies, marches and some during the miners strike. I am glad for example that I took photographs of The Barras in its heyday, because it is just a shadow now of what it was.

Was it easy getting access? You look very close to your subjects, and in amongst it all, what was your approach?

I was basically an amateur photographer trying to get the shots that I wanted so getting in close was required. I discovered that so long as I looked and acted the part nobody challenged me. For example the Jock Stein Testimonial. Myself and a friend noticed that the Daily Record photographers wore red Adidas cagoules when covering games so we bought these out of Millets Stores. On the night we entered the stadium through the turnstiles with our kit and red cagoules on and walked down onto the track around the pitch where the invalid cars would drive. The police just parted and let us through. That is why the pictures look close up, I was standing on the pitch trying my best to look professional and it worked. Probably impossible to attempt now due to security and issuing of accreditation bibs etc.

Did the work get exhibited much or published back then?

No not really. I was basically doing my own thing and building up an archive of work. I was doing all my own darkroom work at the time as well. I did have a small exhibition of work in the bar of the Paisley Art Centre which resulted in a few sales of prints but that was about it. I never really pushed my work but I knew there could be interest in it at some time.

Were you looking at other photography back then? Who was inspiring you, if anyone?

I would have to say that the biggest influence on my work has been Oscar Marzaroli. I became aware of his work early on in my photography journey and have been an admirer to this day. I met him briefly at the Third Eye Centre in 84. I was looking at one of his photographs and I became aware of him standing beside me. We chatted about his work and I asked him for advice on how maybe some day I could get work exhibited. His simple advice was, “Just keep taking photographs”. I have also been a big fan of Don McCullin. Not so much his excellent war photography but they way he would capture every day life.

Did you have contact with other photographers, or for in any collective way at all?

Not really, apart from the usual Camera Club experiences early on. I am self taught in both the taking and processing of my work and haven’t studied photography in an academic way. Everything I know and practice has been through experience and trial and error. Social media can be a good way of meeting like minded photographers and I have recently attended a couple of workshops on Street Photography, followed up by sharing my work with the StreetSnappers Collective both on-line and through contributing to a book we recently produced.

You’ve made a book recently ‘Mother Glasgow’, how did that come about and what was the process?
Did you edit that yourself?

As previously mentioned, I resisted sharing many of my B&W negative film images until I decided the time was right. Last year I decided that the time had come to do this and given it is so easy these days to produce photo books I decided to bite the bullet. I chose around 50 images depicting Glasgow in the 70s and 80s, including a section on The Barras. I edited the book and laid it out using the Book module in Adobe Lightroom. The resulting PDF of the book was uploaded to Mixam and in a couple of weeks time I had my first book which I had titled “Mother Glasgow”. It was really quite emotional to see my work like this after all these years. I realised that not everyone would want to go for the expense of a hard backed book so I decided to produce a Zine of “Mother Glasgow” and these have sold very well. The feedback I have received over “Mother Glasgow” has been very rewarding.

Where can people buy your book?

The hardback version of “Mother Glasgow” is available from Blurb at the following location:
https://www.blurb.co.uk/b/9436438-mother-glasgow

The smaller Zine (A5) version is available to order through my website by ordering using the Contact Me form.  https://peterdegnanphotography.com

Are you on Social media, if so, what are the accounts?